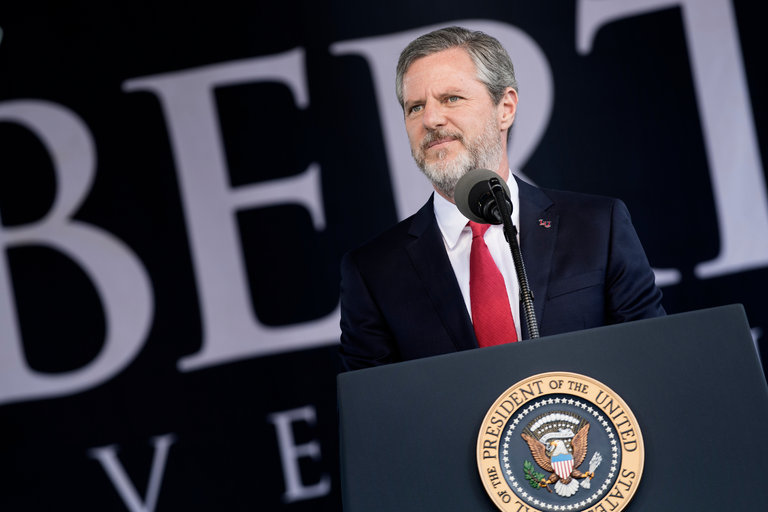 "Liberty University founded by racist evangelical preacher Jerry Falwell is lead by his son who carries on his father's bigotry.

"A number of Liberty University alumni have vowed to return their diplomas, disgusted that the college president, Jerry Falwell Jr., praised President Trump’s response to the Charlottesville, Va., tragedy. I understand the feelings behind their impulse; I, too, am completely appalled by Mr. Falwell’s statements and continued support of the president.

But I received both my bachelor’s and master’s degrees at Liberty, and I can say with confidence that Jerry Falwell Jr.’s disappointing stances do not reflect the guiding ethics of the school. He is an outward-facing figurehead, with minimal involvement with the student body. Returning my diploma would be giving him more influence over Liberty’s future than he deserves.

It is incredibly frustrating for many students and alumni to see someone who positions himself as the voice of the school consistently undermine its values. Following in the footsteps of his father, who founded Liberty University and then became a leading voice in the Moral Majority, Jerry Falwell Jr. has become deeply enmeshed in politics.

My time at Liberty, however, was not defined by right-wing conservatism or heated political fervor but by a thoughtful, nuanced education and the transformative relationships I built with professors and fellow students. Liberty students are not a uniform coalition of people who share the same views; we learn to think deeply, just like other college kids.

But what sets Liberty apart is the sense of community that is possible there. As we come into our own beliefs on issues like worship, gender and sexuality, and even the existence of God, it’s within a safety net of teachers and roommates and friends who genuinely support the flourishing and growth of each other — regardless of the conclusions each person reaches. And that is irreplaceable.

My freshman year, my first class was with an English professor who became as much of a maternal figure to me as an educational mentor. I can’t count the number of hours I spent talking with her about everything from Southern literature to my destructive patterns in romantic relationships, all while she lovingly supplied me with Diet Dr Peppers and made enough jokes at my expense to keep it light. Where my family or finances fell short, she would fill in the gaps.

And she wasn’t the only supportive figure in my academic community: In the English department alone, I had three other professors I could run to at a moment’s notice, cry to without embarrassment and freely ask for advice."

Why I’m Not Returning My Liberty University Diploma - The New York Times
Posted by John H Armwood II at 6:23 AM