A Guide to Joe Arpaio, the Longtime Sheriff Who Escaped Strife - The New York Times 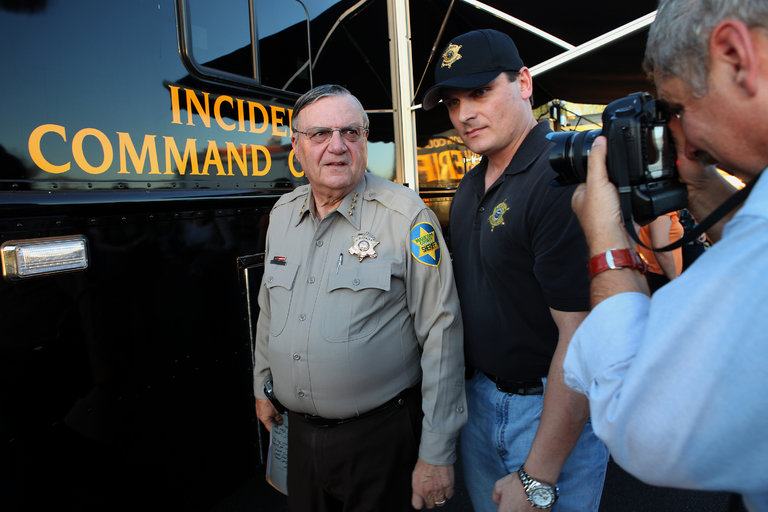 "True evil me, Arpaio and Ttump

"During his six terms as sheriff, he led his team of deputies in Maricopa County, which includes Phoenix, on a crusade against illegal immigration, turning himself into a nationally known figure — and a political lightning rod. It culminated in a lost election last year and conviction for criminal contempt in July.

Mr. Arpaio has been in the headlines for decades, and he grabbed another Friday when President Trump pardoned him — to the sound of outraged Democrats (and muted Republicans).

Here is a guide to The New York Times’s coverage of Mr. Arpaio’s career.

The Times first mentioned Mr. Arpaio in 1994, two years after he became sheriff of Maricopa County. The article was about coffee.

It said the sheriff, having already banned cigarettes and sex magazines in prison, was nixing coffee, too, in order to cut costs — and to make sure inmates could not use the hot drink as a weapon.

The Times’s next article about Mr. Arpaio, in 1995, said he stayed awake at night thinking of ways to make headlines, and had already become one of the most popular figures in Arizona.

He would be re-elected five times.

Sheriff Arpaio speaking with members of what is believed to be the first chain gang of female inmates in 1996. Credit Jeff Topping/Reuters

During Mr. Arpaio’s tenure, inmates were sometimes forced to stay in outdoor tents under the hot sun, wear pink underwear or work on chain gangs. (The sheriff is widely believed to have started the nation’s first female chain gang in 1996.) His deputies have been accused of racist abuse, needless intimidation and fatal mistreatment of prisoners.

Mr. Arpaio seemed to revel in the spotlight as his tactics drew greater attention, and he often accused opponents of attacking him for political gain.

He was a strident critic of President Barack Obama and a leading proponent of the theory that Mr. Obama was not born in the United States. In 2012, he sent a posse to Hawaii to check on the president’s birth certificate.

The sheriff was an early supporter of Mr. Trump, giving his endorsement to the candidate in January 2016.

Wrong side of the law?

Mr. Arpaio has been embroiled in legal troubles for at least a decade. Some highlights:

In 2007, two owners of The Phoenix New Times, a consistently fierce critic of the sheriff, were arrested in their homes after the newspaper reported on a county subpoena seeking readers’ internet browsing records. The charges were dropped, and the paper’s owners won millions in a settlement after suing the sheriff’s office.

In 2011, the Justice Department accused Mr. Arpaio of leading an office with “a pervasive culture of discriminatory bias against Latinos,” who were unfairly targeted by immigration raids and traffic stops in Maricopa County. It tried to reach a settlement to address the violations before resorting to a lawsuit in 2012.

A federal judge ruled in 2013 that the sheriff and his deputies had violated the constitutional rights of Latinos. An independent monitor was ordered to ensure that the sheriff’s office would end biased practices.

Sheriff Arpaio defended himself against the Justice Department in a news conference at his Phoenix office in 2011. Credit Joshua Lott for The New York Times

Photo by: Joshua Lott for The New York Times

But in 2014, the same judge said his order had been mocked and defied. He made similar comments in 2016, when he referred Mr. Arpaio for prosecution for criminal contempt.

A conviction, a pardon

Mr. Arpaio was convicted in July, with sentencing scheduled for October. Mr. Arpaio, who had repeatedly insisted that his office was operating legally, was expected to appeal.

He ultimately did not have to.

Mr. Trump issued a pardon for Mr. Arpaio on Friday in a move that was unconventional, but almost certainly legal.

The two men exchanged laudatory tweets that evening, and Mr. Arpaio posted a link to a website where supporters could donate toward his legal fees.

A Guide to Joe Arpaio, the Longtime Sheriff Who Escaped Strife - The New York Times
Posted by John H Armwood II at 6:25 AM