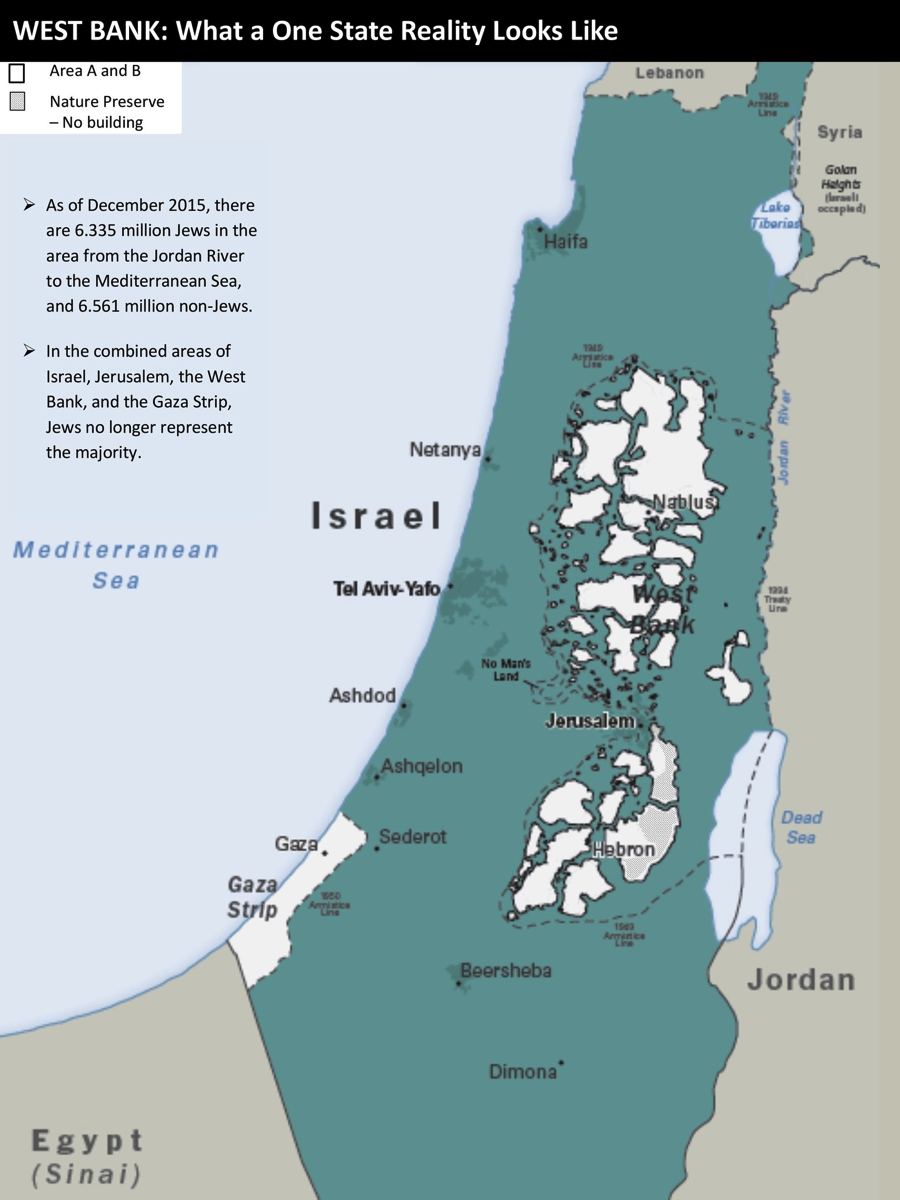 "One afternoon in the spring of 2015, a senior State Department official named Frank Lowenstein paged through a government briefing book and noticed a map that he had never seen before. Lowenstein was the Obama Administration’s special envoy on Israeli-Palestinian negotiations, a position that exposed him to hundreds of maps of the West Bank. (One adorned his State Department office.)
Typically, those maps made Jewish settlements and outposts

look tiny compared to the areas where the Palestinians lived. The new map in the briefing book was different. It showed large swaths of territory that were off limits to Palestinian development and filled in space between the settlements and the outposts. At that moment, Lowenstein told me, he saw “the forest for the trees”—not only were Palestinian population centers cut off from one another but there was virtually no way to squeeze a viable Palestinian state into the areas that remained. Lowenstein’s team did the math. When the settlement zones, the illegal outposts, and the other areas off limits to Palestinian development were consolidated, they covered almost sixty per cent of the West Bank.

Lowenstein showed the small map to Secretary of State John Kerry and said, “Look what’s really going on here.” Kerry brought the map to his next meeting with President Obama. The map was too small for everyone in the Situation Room to see, so Lowenstein had a series of larger maps made. The information was then verified by U.S. intelligence agencies. Obama’s Presidency was winding down, but Lowenstein figured that he could use the time left to raise awareness about what the Israelis were doing. “One day, everyone’s going to wake up and go, ‘Wait a minute, we’ve got to stop this to at least have the possibility of a two-state solution,’ ” Lowenstein said.

The State Department presentation, which was prepared in 2015 and updated in 2016, showed examples of what the State Department identified as “Palestinian incitement” and maps depicting Israel’s settlement growth in the West Bank. One of the maps was titled “What a One State Reality Looks Like,” and included a bullet point that read, “In the combined areas of Israel, Jerusalem, the West Bank and the Gaza Strip, Jews no longer represent the majority.” (Israeli officials have said that the number of Jews and Arabs is at or near parity.)

Kerry met regularly with Obama in the Oval Office. During one of those meetings, Kerry placed the maps on a large coffee table, one after another, so Obama and his advisers could study them. Ben Rhodes, one of Obama’s longest-serving advisers, said the President was shocked to see how “systematic” the Israelis had been at cutting off Palestinian population centers from one another. Lowenstein didn’t show the maps to the Israelis, but he did walk them through the key findings, which were incorporated into Kerry speeches and other documents. Lowenstein said the Israelis never challenged those findings.

Later, Kerry presented some of the maps to Mahmoud Abbas, the Palestinian President. Kerry’s goal was to show Abbas that the Obama Administration understood the extent to which the two-state solution was threatened. Abbas was taken aback. Instead of feeling reassured, he told a confidant that the maps convinced him that the Americans believed “the chances of a viable Palestinian state is next to nil.” Alarmed by Israeli actions depicted in the maps, Obama decided to abstain on a U.N. Security Council resolution condemning the settlements, clearing the way for its passage. It would be Obama’s final act of defiance against Benjamin Netanyahu, the Israeli Prime Minister, before Donald Trump took office and put in place policies that were far more accepting of the settlers."

The Maps of Israeli Settlements That Shocked Barack Obama | The New Yorker: ""