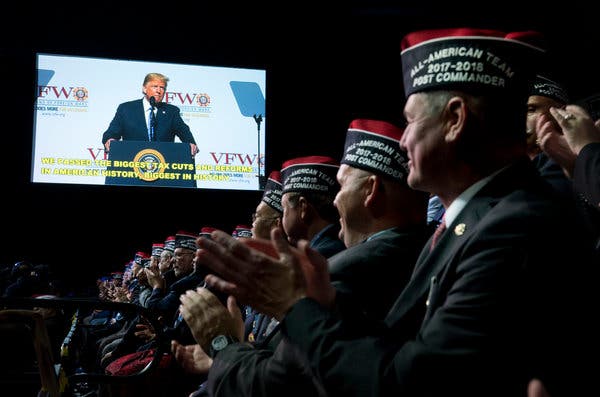 "Facts don’t matter to millions of Americans anymore. That is just the truth. Republicans bewitched by Donald Trump have devalued the import of truth.

It is a sad truth and a dangerous one. What is the operational framework of a society when the truth ceases to be accepted as true?

There may be precedents in other countries, but one would be hard pressed to find a precedent here. It is becoming cliché now to say that we are in uncharted territory with Trump and his regime, but that is precisely where we are.

There is tremendous possibility for peril, but luckily for Trump and the country, we have so far avoided all-out catastrophe. There is no guarantee that our lucky streak will be extended.

Every day there is no catastrophe, every day yet another never-before-seen, outrageous scandal emerges from this administration and Trump is not destroyed by it, it strengthens him and numbs us and steels his supporters.

The more he lies without paying a price for it, the more he weakens the power of the truth to defend right and condemn wrong. And he expands his latitude to lie more.

Trump is experiencing something of a Superman Syndrome: Having survived so many episodes that would have destroyed another presidency, he has become ever more emboldened in his offenses because he comes to see himself as invincible. What doesn’t kill him makes him stronger.

Rather than lying less, Trump is increasing the frequency of his lying. As The Washington Post’s Fact Checker reported last month:

“When we first started this project for the president’s first 100 days, he averaged 4.9 claims a day. But the average number of claims per day keeps climbing as the president nears the 500-day mark of his presidency. In the month of May, the president made about eight claims a day — including an astonishing 35 claims in his rally in Nashville on May 29.”

Trump has gone from making 4.9 false claims a day to now making 6.5 a day.

It’s not that this behavior is being normalized as much as it is becoming ritualized.

On Tuesday, Trump upped his assault on truth, telling the audience at a veterans’ event in Kansas City, Mo., “Just stick with us, don’t believe the crap you see from these people, the fake news,” before telling them, “Just remember, what you are seeing and what you are reading is not what’s happening.”

There was applause and cheering from the crowd.

Rather than the presidency imposing some sense of propriety on Trump, he has used the power of the position to project a sort of hypnotic disregard and amnesiac self-delusion upon the people who follow him. So much of what Republicans once said they believed has now been betrayed.

Furthermore, Trump plays to a duality, a contradiction within his supporters: tough guy with a tender ego. He boasts about being strong while simultaneously whining about being assailed.

His griping, in a weird way, is what fuels his gasconade. He insists to his supporters that he is being treated unfairly and their reflexive defense of him prevents them from even entertaining the fairest of criticisms.

Indeed, the more Trump is rebuked by his opponents, the more his base rallies.

As New York Magazine wrote this week about a new NBC News-Wall Street Journal poll: “Trump has seen his approval rating tick up to 45 percent, an all-time high for him in the survey. Trump’s high rating, up one percent from June, is thanks largely to support of Republicans, 88 percent of whom told pollsters that they approve of the job he’s doing. Among them, 64 percent strongly approve of Trump, who is experiencing an almost unheard-of level of support from members of his own party.”

CNN obtained on Tuesday a secret recording between Trump and his then-attorney Michael Cohen made two months before the election in 2016 in which the two men discussed setting up a company to funnel a payment to American Media to make sure it continued to keep silent about the story of former Playboy model Karen McDougal, a woman who claims to have had an affair with Trump.

The White House had previously denied any knowledge that McDougal had even sold her story. That clearly was a lie. Trump not only knew; he was discussing buying it from the seller.

This would have been a lethal revelation for any other president, but in these maddening Trump days, it becomes just another breach of faith, protocol, custom and possibly the law to toss on top of the ever-growing mound.

Rather than cowering in shame at his deception and his unseemliness, Trump simply goes on the attack, tweeting outrage and indignation:

“What kind of a lawyer would tape a client? So sad! Is this a first, never heard of it before? Why was the tape so abruptly terminated (cut) while I was presumably saying positive things? I hear there are other clients and many reporters that are taped — can this be so? Too bad!”

We are all trapped, for the time being, held hostage by an empowered president, a self-neutered Congress, and a cultish horde of Trump voters.

But it is the vote that is the most likely way to curb this rolling tragedy. The midterm elections are only a little more than 100 days away.

Charles M. Blow has been an Op-Ed columnist since 2008. His column appears every Monday and Thursday. He joined The Times in 1994 and was previously the graphics director. He also wrote the book “Fire Shut Up in My Bones.”

Opinion | What Doesn’t Kill Him Makes Him Stronger - The New York Times
Posted by John H Armwood II at 11:14 AM