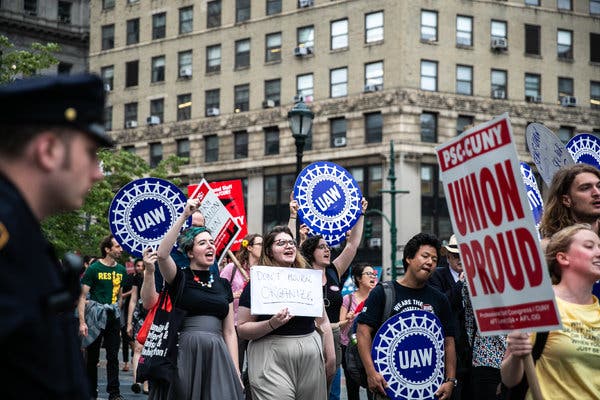 "The Supreme Court decision striking down mandatory union fees for government workers was not only a blow to unions. It will also hit hard at a vast network of groups dedicated to advancing liberal policies and candidates.

Some of these groups work for immigrants and civil rights; others produce economic research; still others turn out voters or run ads in Democratic campaigns. Together, they have benefited from tens of millions of dollars a year from public-sector unions — funding now in jeopardy because of the prospective decline in union revenue.

Liberal activists argue that closing that pipeline was a crucial goal of the conservative groups that helped bring the case, known as Janus v. American Federation of State, County and Municipal Employees.

“If the progressive movement is a navy, they’re trying to take out our aircraft carriers,” said Ben Wikler, Washington director of the liberal activist group MoveOn.org.

Conservatives have acknowledged as much. In a fund-raising solicitation in December, John Tillman, the chief executive of the free-market group that found the plaintiff in the case, cited the objective of depriving unions of revenue by helping workers abandon them. “The union bosses would use that money to advance their big-government agenda,” Mr. Tillman wrote.

Even President Trump took notice of the justices’ ruling, declaring on Twitter that it was a “big loss for the coffers of the Democrats!”

In the 5-to-4 decision on Wednesday, the court’s majority ruled that requiring nonmembers to make union payments violated their First Amendment rights, since much of what unions do could be considered political activity at odds with their beliefs.

The unions’ ability to spend on progressive causes and candidates was already diminishing.

As conservative groups escalated their campaign to rein in labor over the past decade or two, unions have had to divert more and more of their budgets to defensive battles, leaving less to spend elsewhere. But the multipronged effort that culminated in the Janus decision — whose likely effect will be a loss of at least hundreds of thousands of members and tens of millions in revenue — has forced many public unions, among the most powerful in the labor movement, to fundamentally rethink their spending.

Mary Kay Henry, the president of the Service Employees International Union, said that her union had cut its budget by about 30 percent in anticipation of the decision, and that the service employees had been talking with leaders of liberal groups for two years about how to offset the loss. She said the union, with about two million members, would provide a range of nonmonetary support, from in-kind staff assistance to help with fund-raising.

Brad Woodhouse, a former communications director for the Democratic National Committee, until recently ran a group called Americans United for Change, whose budget was heavily dependent on contributions from public-sector unions when it campaigned for health care reform and the Obama stimulus plan a decade ago. Mr. Woodhouse said unions gave less in 2015 and 2016, when the Supreme Court considered a predecessor to the Janus case. (The court deadlocked in that case after Justice Antonin Scalia died.) Partly as a result, the group shut down after the 2016 election.

The Economic Policy Institute, a Washington-based think tank producing research on worker rights, wages and employment, has relied on the four biggest public-sector unions for about 10 to 15 percent of its roughly $6 million in annual revenue in recent years.

“We aren’t seeing it as an existential threat,” said Thea Lee, the institute’s president, “but we have been trying to be conservative in what projects we pursue.”

A group called Mi Familia Vota, which advocates on behalf of Latino voters and immigrants, had received about $1 million a year directly from the Service Employees International Union since 2012 — a significant portion of its annual revenue, which has ranged from about $1.5 million to $5 million during that time.

“We’ve been adjusting,” said Ben Monterroso, director of Mi Familia Vota, which focuses on issues including education, health care, workers’ rights and voting rights. “Some of the programs we’ve needed to scale back. Demonstrations, activities, actions, we’ve scaled back.”

Mark Janus, center, the plaintiff in the case challenging the collection of mandatory union fees from nonmembers, entering the Supreme Court building before the ruling. “They’re trying to take out our aircraft carriers,” a liberal activist said of conservative groups that backed the litigation.

Mr. Monterroso said the group was now focused primarily on elections and elected officials. “We do that by growing the electorate — helping people become citizens when eligible, and helping those eligible be registered,” he said.

Other groups that register and mobilize voters may be vulnerable, too. America Votes, a group with a permanent staff in more than 20 states that turns out voters on Election Day and rallies them around causes like reproductive rights and the environment, received more than one-fifth of its nearly $10 million budget from the four biggest public-sector unions in 2016.

The major public-sector unions are also major backers of ballot-measure campaigns, having spent more than $7 million on such efforts in 2015 and 2016. Some of the measures involved increasing taxes to fund services like education and health care, and raising the minimum wage. Unions funded opposition to a measure allowing an expansion of charter schools in Massachusetts.

(Some unions said it was too early to know what spending they would cut. The American Federation of Teachers was adamant that it would continue funding certain groups, like America Votes.)

In some arenas, the loss of union money will almost certainly be offset by other liberal donors — both the wealthy and ordinary citizens. Few party operatives worry, for example, that the Democrats will lack resources for their next presidential nominee, or candidates in high-profile Senate and House races.

A newly formed political action committee called End Citizens United, named for the Supreme Court decision that opened the door to more corporate money in elections, raised about $25 million, largely from small donors, during the 2016 campaign, and is on pace to exceed that amount this election cycle. Most of its spending supports House and Senate Democratic candidates favoring campaign-finance reform.

In other cases, the loss of union money may be offset by grass-roots activism.

In 2016, the four major public-sector unions gave nearly 15 percent of the $17 million raised by the Democratic Legislative Campaign Committee, which funds state legislative races nationwide. But the group is optimistic that any loss of union revenue can be offset by what it calls the “people power” of union members and other voters.

Activists and party operatives said union cash would be more difficult to replace in other areas. Mr. Wikler said MoveOn’s monthly donor base had quadrupled since Mr. Trump was elected, allowing it to increase support for groups working on immigrants’ rights, workers’ rights and racial-justice causes.

“But the scale of what we can kick in to efforts like that are dwarfed by what the public-sector unions can muster,” he said.

Mr. Woodhouse said labor money could be especially critical to groups that must form quickly for a specific policy fight. He cited the example of Americans United, founded in 2005 to block President George W. Bush’s attempt to partly privatize Social Security.

“It was a lot easier to go to labor to do that than it is to kind of try to do this through other means — low-dollar or individual donors,” he said. “Speed was essential, and we were caught a little flat-footed.” (Labor has funded some of these efforts through super PACs in recent years.)

In the 2000 presidential election, noted Steve Rosenthal, a former political director of the A.F.L.-C.I.O., 43 percent of the votes cast in Michigan came from union households, which tend to vote Democratic by a large margin. In the 2016 presidential election, the first after the state passed a “right to work” law ending mandatory union fees, only 28 percent of votes came from union households. That drop-off accounts for Hillary Clinton’s margin of defeat in the state many times over.

The key to unions’ importance, said John D. Podesta, who was chairman of Mrs. Clinton’s campaign and is a founder of liberal advocacy and research groups, is “their ability to change outcomes through educational efforts of their own members.”

“They do a very good job of communicating with their own members and getting them out to vote,” he said."