Opinion | There’s So Much You Don’t Know About Brett Kavanaugh - The New York Times - The 1890s are coming back. 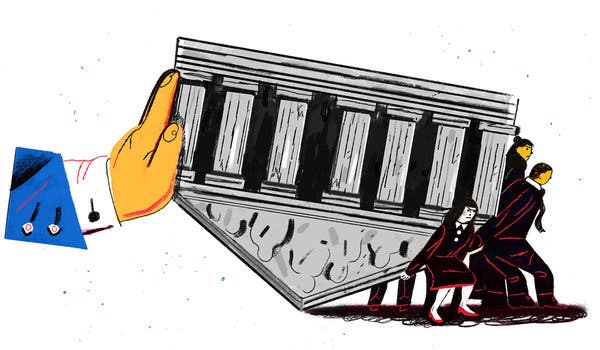 "And you probably won’t until it’s too late.

So what can the American people hope to know in the days ahead about Brett Kavanaugh, President Trump’s latest candidate for the Supreme Court, who will very shortly hold one of the most powerful unelected jobs in government and wield profound influence over their daily lives? An awful lot, and yet, at the same time, so alarmingly little.

First, the awful lot: Judge Kavanaugh would shift the balance of constitutional jurisprudence to the right, creating a solid right-wing majority on the court possibly until the second half of the 21st century. While the somewhat unpredictable Justice Anthony Kennedy once served as the fulcrum for the court, that role will now go to Chief Justice John Roberts Jr., a far more ideological conservative.

Judge Kavanaugh, who sits on the federal appeals court for the District of Columbia, has been a fixture in conservative politics and is widely respected by the Republican elite. Before becoming a judge, he clerked for Justice Kennedy and worked for Kenneth Starr, the independent counsel who investigated President Bill Clinton, and later in the George W. Bush White House. He successfully portrayed himself in his remarks at the White House as a nice guy who coaches girls in basketball, feeds the homeless and believes in the Constitution.

What Americans can’t know about Judge Kavanaugh: pretty much anything else. That’s thanks to the perversion of the Supreme Court confirmation process, which once provided the Senate and the public with useful information about a potential justice’s views on the Constitution, but which has, ever since the bitter battle over President Ronald Reagan’s failed nomination of Robert Bork in 1987, devolved into a second-rate Samuel Beckett play starring an earnest legal scholar who sits for days at a microphone and labors to sound thoughtful while saying almost nothing.

Neil Gorsuch perfected the role last year, with his aw-shucks demeanor and his disingenuous regrets that, gosh, it just wouldn’t be right to express his views about almost any legal case or issue that had come before the court in the past, or might one day in the future.

Senate Democrats didn’t cover themselves in glory trying to pin down Justice Gorsuch, spending an inordinate amount of time hammering him on old opinions that demonstrated his supposed disdain for the “little guy.” Justice Gorsuch easily parried the charge by pointing out, rightly, that his allegiance was to the Constitution and not to individual litigants, however sympathetic they might be.

It’s true that Supreme Court nominees used to sail through the Senate on voice votes. That was another era, when the major parties weren’t as polarized as they are now, and the justices’ votes often broke down in unpredictable ways. Today, there is essentially no overlap between the conservative justices, all appointed by Republican presidents, and the liberals, all appointed by Democratic presidents — and that was before Justice Kennedy stepped down. The increasing polarization undermines the crucial role the court needs to play in our democracy, acting as a neutral arbiter that checks the elected branches.

There are structural fixes, like term limits, that could counteract this trend. When the Constitution’s framers decided to give Supreme Court justices lifetime appointments, the life expectancy for a free white male was roughly 35 years — less than half what it is today, and equal to the entire tenure of Justice John Paul Stevens, who retired in 2010 and is still going strong at 98.

One proposal would limit justices to 18-year terms, which would create an opening on the court every two years, and reduce some of the political gamesmanship that surrounds open seats today. But any change to the justices’ tenure would require a constitutional amendment, and so is a longer debate for another day.

In the meantime, what should senators ask Judge Kavanaugh?

First, the questions everyone wants answered: What is his judicial philosophy? How does he approach interpreting the Constitution and statutes? Does he agree with the decision in landmark Supreme Court cases like, say, Brown v. Board of Education, which outlawed racial segregation in public schools, or Griswold v. Connecticut, which established a constitutional right to privacy? There’s no reason, despite their protestations, that nominees for the highest court in the land can’t give the public straight answers to these questions and many more like them — several, including Chief Justice Roberts himself, did so in the past.

But Senate Democrats and others who believe in the importance of an independent and nonpartisan judiciary also need to treat these hearings as a public-education opportunity. Where once these sorts of hearings served to inform Americans about the finer points of constitutional law, now they might be used to alert them to cynical tactics of power politics. For starters, that would mean making it clear that Monday’s nomination belongs not to Mr. Trump so much as to the conservative legal activists at the Federalist Society, who have spent nearly four decades building a movement to reshape the federal judiciary and rewrite whole sections of constitutional law.

During the 2016 campaign, Mr. Trump publicized a list of possible Supreme Court nominees preapproved by the Federalist Society and the Heritage Foundation, another conservative group. It was scrubbed of any squishes along the lines of David Souter, Anthony Kennedy or even Chief Justice Roberts, all of whom have been deemed insufficiently committed to the cause for failing to vote in lock step with the radical right’s agenda. (Judge Kavanaugh was left off the original list but was added later.)

The Federalist Society claims to value the so-called strict construction of the Constitution, but this supposedly neutral mode of constitutional interpretation lines up suspiciously well with Republican policy preferences — say, gutting laws that protect voting rights, or opening the floodgates to unlimited political spending, or undermining women’s reproductive freedom, or destroying public-sector labor unions’ ability to stand up for the interests of workers.

In short, Senate Democrats need to use the confirmation process to explain to Americans how their Constitution is about to be hijacked by a small group of conservative radicals well funded by ideological and corporate interests, and what that means in terms of the rights they will lose and the laws that will be invalidated over the next several decades.

We’re witnessing right now a global movement against the idea of liberal democracy and, in places like Hungary and Poland, its grounding in an independent judiciary. Mr. Trump and Senate Republicans appear happy to ride this wave to unlimited power. They will almost certainly win this latest battle, but it’s a victory that will come at great cost to the nation, and to the court’s remaining legitimacy.

Americans who care about the court’s future and its role in the American system of government need to turn to the political process to restore the protections the new majority will take away, and to create an environment where radical judges can’t be nominated or confirmed. As those tireless conservative activists would be the first to tell you, winning the future depends on deliberate, long-term organizing in the present, even when — especially when — things appear most bleak."

Opinion | There’s So Much You Don’t Know About Brett Kavanaugh - The New York Times
Posted by John H Armwood II at 11:05 AM