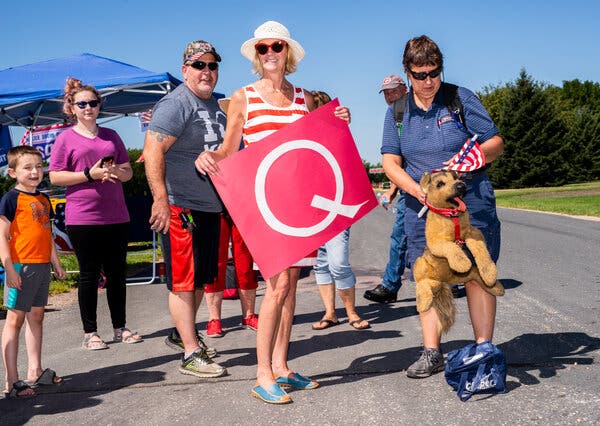 "Conspiratorial thinking is an elemental part of American political life, one that stretches back to before the founding of the United States.
“The conviction on part of the Revolutionary leaders that they were faced with a deliberate conspiracy to destroy the balance of the constitution and eliminate their freedom had deep and widespread roots — roots elaborately embedded in Anglo-American political culture,” the historian Bernard Bailyn wrote in his 1968 book, “The Ideological Origins of the American Revolution.” (Bailyn died this summer at age 97.)
But not all conspiracy thinking is the same. In “A Lot of People are Saying: The New Conspiracism and the Assault on Democracy,” the scholars Russell Muirhead and Nancy L. Rosenblum distinguish between “classic” conspiracism and its “new” variant. “Classic conspiracism,” they write, “gives order and meaning to occurrences that, in their minds, defy standard or official explanations.” It makes sense of things by “imposing a version of proportionality: world-changing events cannot happen because of the actions of a single obscure person or a string of senseless accidents.” Classic conspiracism, in other words, is conspiracy with theory attached.
The “new” conspiracism, by contrast, is conspiracy without any discernible theory of the world. It rejects explanation, however distorted, in favor of disorientation and delegitimization. It is the difference between a conspiracy that tries to make sense of an otherwise incomprehensible reality — however anomalous that sense might be — and one that doesn’t care for the real at all. The “new conspiracism” is certainly partisan, but it isn’t especially political. These conspiracists, Muirhead and Rosenblum write, “offer no notion of what should replace the reviled parties, processes and agencies of government once covert schemes are revealed. They are without political prescriptions or an ounce of utopianism.”
All of this is apropos of a recent survey done by Civiqs for the left-leaning website Daily Kos. In it, one in three Republicans said that QAnon — a “new conspiracist”-style conspiracy in which President Trump struggles against a global cabal of Satan-worshipping pedophiles, including Hillary Clinton and other prominent opposition figures — was “mostly true.” Another 23 percent said that “some parts” of the conspiracy were true. Thirteen percent of Republicans answered that QAnon was “not true at all.”
There is some reason to doubt this result. The survey asks whether “you believe that the QAnon theory about a conspiracy among deep state elites is true,” a question that might prime them to reveal partisan attitudes not about “the QAnon theory” but about “the deep state,” — leading respondents to answer “yes” without thinking through the implications. There is also other polling, from The Washington Post and the Pew Research Center, which shows much less awareness of and support for QAnon (although any amount is significant, given the content of the conspiracy).
At the same time, there are clear signs that this conspiracy narrative has made its way into the Republican mainstream. One supporter, Marjorie Taylor Greene, won 57 percent of the vote in the August runoff election for Georgia’s heavily Republican 14th congressional district. She’ll almost certainly head to Washington in the fall. Lauren Boebert of Colorado, who unseated a five-term incumbent for the Republican nomination in the state’s Third congressional district, spoke favorably of QAnon on a radio program, saying “If this is real, then it could be really great for our country.” The president himself has also affirmed the conspiracy which, after all, holds him as a hero. “I don’t know much about the movement other than I understand they like me very much, which I appreciate,” Trump said in the White House briefing room last month.
We may not have a complete picture of the QAnon support in the Republican Party, but there’s no question it exists, with serious consequences for American politics. After all, without the “birther” conspiracy that President Barack Obama was not a natural-born citizen of the United States, there’s a strong chance that Trump, who vaulted himself into Republican politics as the foremost proponent of the conspiracy, would not now be the president. And as president, Trump relies on vague conspiratorial assertions to shape the political environment. This past week, he warned of planes “almost completely loaded with thugs wearing these dark uniforms” bringing mayhem from city to city. He also accused Joe Biden, his opponent in the presidential election, of being a puppet whose strings are pulled “by people you’ve never heard of. People that are in the dark shadows.” Both are perfect examples of the new conspiracism — vague assertions meant to sow doubt and feed mistrust without the promise of answers or a resolution.
Trump feeds on these conspiracies. They are the lifeblood of his political career. And this fact helps us understand what it means for conspiracies like QAnon to grow and spread throughout the body politic. “There is no conversation that can build a translation bridge connecting this epistemic divide,” Muirhead and Rosenblum write. “There can be no argument or negotiation or compromise — all of which require some shared terrain of facts and a shared horizon of what it means to know something.”
Conspiratorial thinking has always been a part of American politics, but it has never run wild like this. We should hope that it gets reined in. We should also hope that Trump isn’t influential enough, in the long run, to make the new conspiracism the main mode of discourse for the entire Republican Party.
As much as we lack common ground now, that would truly be a world without a shared reality. It would be a world where democratic life was impossible and where politics as a realm of deliberation and collective action lacked the oxygen to exist."
Opinion | The Conspiracist in Chief Will Save Us All - The New York Times
Posted by John H Armwood II at 6:46 PM