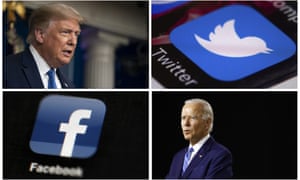 
The Trump campaign published a set of Facebook ads that featured the president’s Democratic rival Joe Biden looking older than the 77-year-old former vice-president is. The ads fall in line with one of the president’s favorite attack lines for Biden: that he’s too old and infirm to run for president. (Trump is 74 years old.)
The Facebook ad read: “President Trump knows that the Fake News Media will NEVER report accurately on his standings in the polls against Sleepy Joe. We want the truth, and we need to hear it directly from REAL Americans, like YOU.”
The pictures, analyzed by HuffPost, show a picture of Biden had been edited to make him look older, by darkening his skin and emphasizing imperfections.
On Monday the campaign’s Trump War Room Twitter account tweeted a manipulated video that appeared to show Biden saying, “You won’t be safe in Joe Biden’s America.” The video was labelled “manipulated media” by Twitter.
The video was actually a clip of Biden quoting the Trump campaign.
“Trump and Pence are running on this and I find it fascinating: Quote, ‘You won’t be safe in Joe Biden’s America.’ And what’s their proof? The violence we’re seeing in Donald Trump’s America,” Biden said in the original quote.
Biden’s campaign also responded to the manipulated clip on Twitter though a senior adviser, Symone Sanders.

The Trump campaign manipulated a video from @JoeBiden’s speech today because they could not challenge the content of the speech. This is their game. They cannot and will not compete on the facts.
— Symone D. Sanders (@SymoneDSanders) August 31, 2020

Dan Scavino, a longtime Trump aide currently serving as the White House deputy chief of staff for communications, posted a manipulated video that appeared to show Biden endorsing Trump. The video was flagged by Twitter and later disabled on the site. The Washington Post’s factchecker vertical gave the video four pinocchios – the highest rating for an untrue claim or argument. The original tweet got more than 2.4m views.
The Trump campaign communications director, Tim Murtaugh, told the Washington Post that the video was “obviously a parody”.
It hasn’t just been the Trump campaign either. A clip of the liberal activist Ady Barkan talking to Biden was manipulated and published by the House Republican whip Steve Scalise’s office. The video appeared to show Biden saying he would redirect funding from police, but was taken out of context. Barkan actually asked whether he supported redirecting some funding from police to mental health services. Twitter flagged that video as well.

Barkan aggressively called out the ad and demanded it be taken down. Twitter flagged it as well and Scalise’s office eventually complied."
Donald Trump campaign repeatedly doctoring videos for social media ads | US news | The Guardian
Posted by John H Armwood II at 7:20 PM