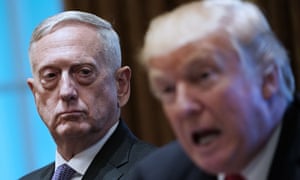 "Four days before ordering a drone strike against the Iranian military commander Qassem Suleimani, Donald Trump was debating the assassination on his own Florida golf course, according to Bob Woodward’s new book on the mercurial president.

Trump’s golfing partner that day was Senator Lindsey Graham, who had emerged as one of his closest advisers, and who urged him not to take such a “giant step”, that could trigger “almost total war”.

Graham warned Trump he would be raising the stakes from “playing $10 blackjack to $10,000-a-hand blackjack”.

“This is over the top,” the senator said. “How about hitting someone a level below Suleimani, which would be much easier for everyone to absorb?”

Trump would not be persuaded, pointing to Iranian-orchestrated attacks on US soldiers in Iraq, which he said were masterminded by the Iranian general, the leader of the elite Quds force of the Iranian Revolutionary Guard.

Suleimani was killed in Baghdad on 3 January, triggering a retaliatory Iranian missile strike against a US base in Iraq, but so far not the large-scale conflict Graham and others warned the president about.

The golf course exchange is described in a forthcoming book, Rage, a second volume on the Trump presidency by Woodward, a veteran investigative reporter famous for covering the Watergate affair and the consequent fall of an earlier scandal-ridden president, Richard Nixon.

Woodward interviewed Trump 18 times for the book and spoke extensively to Graham, as well as many presidential aides.

The portrait that emerges is familiar by now: a volatile president, easily swayed by authoritarian leaders and capable of swinging dramatically from fiery bellicosity to fawning over America’s most ardent adversaries.

Nowhere was that whiplash more violent than in policy towards North Korea. The book chronicles the period between July and November 2017 when Pyongyang tested a succession of long-range missiles capable of hitting the US mainland and carried out its sixth underground nuclear test.

Conscious that the next missile could be heading towards the US, and that decisions would have to be taken in minutes that could put the country on the path to nuclear war, the then defence secretary, James Mattis, took to sleeping in his gym clothes and having a flashing light and bell installed in his bathroom in case a missile alert happened when he was in the shower.

He also spent more time praying in the National Cathedral in Washington and preparing himself for the worst. In the US command system, the president has sole authority to launch nuclear weapons, but Mattis believed he would be asked for his recommendations.

“What do you do if you’ve got to do it?” Mattis asked Woodward. “You’re going to incinerate a couple million people. No person has the right to kill a million people, as far as I’m concerned. Yet that’s what I have to confront.”

Mattis said the tweets were “unproductive, childish and dangerous” and pleaded with Trump to stop.

“I got over enjoying public humiliation by second grade,” he told the president, to no avail.

A conflagration was ultimately averted and by early 2018, the North Korean leader, Kim Jong-un, declared that the goal of developing a nuclear arsenal had been achieved and he would therefore pivot towards focusing on the economy.

Trump also switched direction and made peace overtures to Kim Jong-un, which led to a string of spectacular but ultimately ineffective summits and a remarkable flurry of 27 warm – sometimes breathlessly affectionate – letters between the two leaders, which Woodward has published for the first time.

“Even now I cannot forget that moment of history when I firmly held Your Excellency’s hand at that beautiful and sacred location as the whole world watched,” the North Korean leader wrote. Woodward noted that Trump was thrilled by the use of the title “Excellency”.

The US president described the missives as “love letters” and told Kim they had “a unique style and a special friendship”. After the scare of 2017, the president insisted the flattery was essential for avoiding disaster.

“You can’t mock Kim,” he warned Woodward. “I don’t want to get in a fucking nuclear war because you mocked him.”

US intelligence never worked out who had crafted Kim’s purple English prose, but Woodward wrote: “The analysts marveled at the skill someone brought to finding the exact mixture of flattery while appealing to Trump’s sense of grandiosity and being center stage in history.”

The manipulation of Trump by foreign potentates is a recurring theme of the book. Despite the fact that the special counsel’s Russia investigation found no proof of collusion between the Trump campaign and the Kremlin, the US director of national intelligence, Dan Coats, became convinced that Vladimir Putin “had something on Trump”.

“How else to explain the president’s behavior? Coats could see no other explanation,” Woodward wrote after interviewing the former spy chief. “He was sure that Trump had chosen to play on the dark side – the moneyed interests in the New York real estate culture, and international finance with its corrupt anything-to-make-a-buck deal making.”

Trump freely admits his affinity for foreign strongmen to Woodward.

“It’s funny the relationships I have,” he told the reporter. “The tougher and meaner they are, the better I get along with them … Explain that to me someday.”

Another example is the Saudi crown prince, Mohammed bin Salman, implicated by US intelligence in the murder and dismemberment of a US-based Saudi dissident and writer, Jamal Khashoggi, in October 2018. Trump refused to put his own intelligence chiefs’ assessment and congressional outrage over the prince’s protestations of innocence.

Woodward repeatedly asked Trump whether he believed in Prince Mohammed’s innocence. The president replied only that “he says very strongly that he didn’t do it” and, when pressed further, diverted the conversation to US arms sales to Saudi Arabia.

In another extraordinary scene, the former secretary of state Rex Tillerson describes joining a meeting between Trump and Benjamin Netanyahu in May 2017 in Jerusalem, in which the Israeli leader showed the US president a videotape supposedly showing the Palestinian leader, Mahmoud Abbas, inciting violence against Jews.

Tillerson believed the tape had been faked or manipulated, splicing together words and sentences out of context, but Trump - who had previously been distrustful of Netanyahu - was totally convinced. The next day in Bethlehem, Trump hurled abuse at Abbas, calling him a liar and a murderer, and he severed diplomatic relations and financial support for the Palestinians soon after.

Tillerson came to the conclusion that “Netanyahu had manufactured the tape to counter any pro-Palestinian sentiments that were surfacing”.

The president also expressed pride in his relationship with Turkey’s leader, Recep Tayyip Erdoğan, who in October 2019 persuaded Trump to announce a troop withdrawal from north-eastern Syria, abandoning America’s Kurdish allies, who had taken the lead in the fight against Isis.

The decision was the last straw for an outraged Mattis.

“When I was basically directed to do something that I thought went beyond stupid to felony stupid, strategically jeopardizing our place in the world, and everything else. That’s when I quit,” the former defence secretary said.

Mattis predicted Trump’s impact on the country would be lasting.

“This degradation of the American experiment is real. This is tangible. Truth is no longer governing the White House statements,” he said.

Coats, the former intelligence director, fired in July 2019 while he was playing golf on one of Trump’s courses, came to a similar conclusion.

“To him, a lie is not a lie. It’s just what he thinks,” Coats said. “He doesn’t know the difference between the truth and a lie.”

Woodward tells how allies tried to rein in 'childish' Trump's foreign policy | US news | The Guardian
Posted by John H Armwood II at 7:23 AM