Proud Boys celebrate Trump’s ‘stand by’ remark about them at the debate. - The New York Times 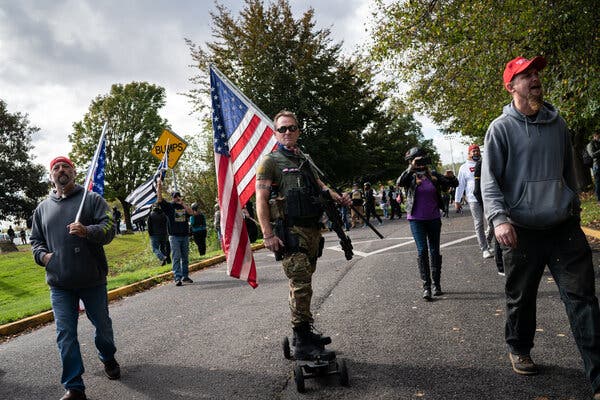 "Members of the Proud Boys, a far-right group that has endorsed violence, celebrated on Tuesday night after President Trump mentioned them during the first presidential debate.


Asked whether he condemned white supremacists and military groups, Mr. Trump demurred and then said, “Proud Boys — stand back and stand by.”
Within minutes, members of the group were posting in private social media channels, calling the president’s comments “historic.” In one channel dedicated to the Proud Boys on Telegram, a private messaging app, group members called the president’s comment a tacit endorsement of their violent tactics.
In another message, a member commented that the group was already seeing a spike in “new recruits.”
Mr. Trump’s rival, Joseph R. Biden Jr., noted that the group was celebrating Mr. Trump’s remark, pointing in a retweet to some of the comments being made.When asked what Mr. Trump meant by “stand by,” Jason Miller, a senior adviser to the president’s campaign, said it was “very clear he wants them to knock it off.”
The Proud Boys describe themselves as “a pro-Western fraternal organization for men.” The group has openly endorsed violence, and has recently been tied to several violent incidents at recent protests.
The Proud Boys were formed in 2016 by Gavin McInnes, one of the founders of Vice Media. Mr. McInnes said in an interview in November 2018 that he was “quitting” the Proud Boys.
Several civil rights groups have condemned the Proud Boys, including the Southern Poverty Law Center, which classifies them as a hate group, and the Anti-Defamation League, which refers to them as “hard-core white supremacists.”
Twitter suspended the Proud Boys from its platform in August 2018, and Facebook followed with a similar ban in October 2018. In the years since, the group has continued to expand its numbers on other social media platforms, and has become more visible at protests."
Proud Boys celebrate Trump’s ‘stand by’ remark about them at the debate. - The New York Times
Posted by John H Armwood II at 8:11 AM