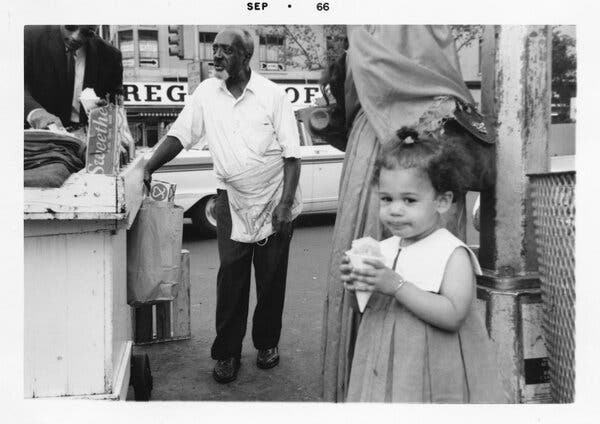 "Some poorly educated Americans of African descent are spouting this same nonsense.  It is interesting that I have only encountered this from males.

"Republican efforts to deny Senator Harris’s identity as an African-American and turn her into a noncitizen are destined to fail.

It was probably inevitable that Kamala Harris becoming Joe Biden’s running mate would result in controversy over her heritage.

Not everyone thought this was the right description for Harris. Several allies of President Trump, for example, were quick to dispute the idea that Harris was or could be Black. The radio host Mark Levin said Harris’s Jamaican origins placed her outside the category of African-American. “Kamala Harris is not an African-American, she is Indian and Jamaican,” Levin said. “Her ancestry does not go back to American slavery, to the best of my knowledge her ancestry does not go back to slavery at all.”

Taking a somewhat different approach, the conservative provocateur Dinesh D’Souza said Harris could not claim to be a descendant of slaves, and thus an African-American, because one of her ancestors may have been a slaveholder.

These objections are wrong. Jamaica, home to a brutal and violent plantation system, was at the center of the trans-Atlantic slave trade, a major node in Britain’s Atlantic empire, along with the Bahamas and its colonies on the North American coast.

Many Jamaicans trace their origins directly to slavery and the mass importation of African captives. Based on a genealogical account by her father, there is a strong chance Kamala Harris is one of them. What’s more, many descendants of enslaved people in the Americas have European ancestry on account of the pervasive sexual violence whites perpetuated wherever slavery took root.

Jamelle Bouie’s Newsletter: Discover overlooked writing from around the internet, and get exclusive thoughts, photos and reading recommendations from Jamelle.

Having said all of that, this bid to contest Harris’s identity — which continued on Thursday with President Trump’s clumsy attempt to stoke another “birther” controversy, this time about a woman born in Oakland in 1964 — gives us an opportunity to think more deeply about the contours of racial identity in the United States, and Black American identity in particular.

A note about terms: I’ve been using “Black” and “African-American” somewhat interchangeably here. But there’s a good case to be made that this is a mistake, that “Black” denotes a racial category and is inclusive of Americans throughout the African diaspora, while “African-American” refers to national origins, specifically descendants of American slaves. But some Black Americans who are not descendants of slaves claim the term “African-American,” and some who are descendants do not. And “Black” also tends to be used in reference to the cultural heritage of Americans of African descent. This column is about “blackness” as a category and a culture, so I will stick with “Black” as my preferred terminology.

My main point is this: Black American identity within the United States emerges from the interaction between structures of oppression — slavery, the slave trade and race hierarchy — and the needs and goals of those enmeshed within them. Slavery bound African captives together into a group; the desire to assert their personhood — to build community, to find respite, to resist — was cause to adopt a common identity. In turn, that common identity gave those individuals and their descendants a foundation from which to challenge the structures that bound them together in the first place. Race hierarchy and racism set in motion a process of group formation and social action, the aim of which was to transcend and overcome racial domination, and racial categorization itself.

Here, precision is important. Black people did not create themselves as “a race.” Race is an ideology, not a biological reality. It arose at a particular time in history, for particular reasons, in an effort to resolve the contradiction of a freedom-loving society that held large parts of its population in bondage. The claim? That the enslaved were a different, lesser form of humanity. It was enslavers who deemed their African captives a “race,” but it was those captives who made themselves into a people. Had things gone differently — if the American Revolution had been emancipatory, for example, with a full commitment to total equality for all people in the new nation — then Black Americans would have remained a people, but might no longer have been a “race.”

Race does not exist in the ether. It must be created and recreated, part of a hierarchical system of domination called racism, itself tied to the production and distribution of resources in our society. The violence and forced peonage of the post-Reconstruction era; the segregation of Jim Crow; the white flight, deindustrialization and the ghettoization of inner cities — all of these things created race.

In other words, it is the reality of racism — the ongoing production of race by institutions and structures of racial domination — that fuels this process of group formation. In his 1940 book, “Dusk of Dawn: An Essay Toward an Autobiography of a Race Concept,” W. E. B. Du Bois captured this dynamic in a single sentence, the final point in an imagined dialogue with a white interlocutor. “The Black man,” he wrote, “is a person who must ride ‘Jim Crow’ in Georgia.”

Bound together by segregation, discrimination and exploitation, Americans of African descent kept building community. And what is crucial to this question of the boundaries of blackness was the sheer rigidity of American race hierarchy. Your exact origins did not matter. Neither, for that matter, did your skin color.

In his autobiography, “A Man Called White,” a former head of the N.A.A.C.P., Walter Francis White, recounts a mob attack on his childhood home. White and his family — his mother was said to be a descendant of President William Henry Harrison and Dilsia, an enslaved woman — had light-complexions, with few visible African features. “My skin is white, my eyes are blue, my hair is blond,” wrote White. They were, nonetheless, part of Atlanta’s Black community, tied to it by heritage and history. It was those ties that made them a target, and it was that experience of racial violence that impressed on White his own identity: “In the flickering light the mob swayed, paused, and began to flow toward us. In that instant there opened up within me a great awareness; I knew then who I was. I was a Negro.”

(There were Black Americans who “passed” in white society, but they did so by cutting themselves off from ties to community and family, as illustrated brilliantly in the 1929 novel “Passing,” by Nella Larsen.)

The rigidity of race hierarchy in the United States is one important reason that African-descended people from other parts of the world have identified with, and identified themselves as, Black Americans once in this country. They, too, were bound to the fate of the descendants of American slaves, thrown into this process of group formation. A quick look at some of the most prominent figures in Black American history will prove the point. Marcus Garvey, one of the most significant Black nationalists of the 20th century and the founder of one of the largest Black fraternal organizations in American history, was a native of Jamaica. Kwame Ture, born Stokely Carmichael, leader of the Student Nonviolent Coordinating Committee in 1966 and 1967, was born in Trinidad. Shirley Chisholm, the first Black woman elected to Congress and the first Black woman to compete for a major-party presidential nomination, was the daughter of immigrants from Barbados and British Guiana. Sidney Poitier, Harry Belafonte, Colin Powell — the list goes on.

Let’s return to Kamala Harris. Her family, as she explains in her 2019 memoir, grounded itself in the Black community of California’s Bay Area. “From almost the moment she arrived from India,” Harris writes of her mother, “she chose and was welcomed to and enveloped in the Black community. It was the foundation of her new American life.” Harris, in turn, was raised to understand herself as a Black American. “My mother understood very well that she was raising two Black daughters. She knew that her adopted homeland would see Maya and me as Black girls, and she was determined to make sure we would grow into confident, proud Black women.” Harris, for her part, claims her Black identity as much as her Indian heritage: “I was born Black. I will die Black. I’m not going to make excuses for anybody because they don’t understand,” she said in an interview in 2019.

Because of heritage, upbringing and the realities of American racism, Harris calls herself Black and is also understood as Black by people within and outside the Black community.

Perhaps, then, instead of asking “What makes someone Black?” it might be better to ask “Why do so many Americans of African descent claim blackness?” The answer, I think, is similar to what it was when most Black people still toiled in bondage. In the face of racism and racial oppression, Black identity links us to a history and to a culture, to tools to survive and resources to thrive. It provides refuge and spiritual sustenance. And it connects us to a vital tradition of struggle and perseverance, with many different visions for what it might mean to be free."

Opinion | Black Like Kamala - The New York Times
Posted by John H Armwood II at 6:42 AM