'White supremacy' was behind child separations — and Trump officials went along, critics say 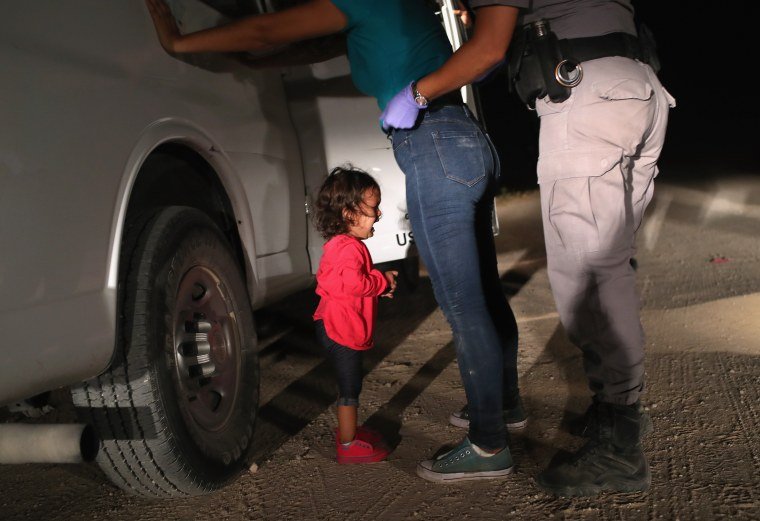 Duh!  This is America, isn't it?  White supremacy was central to the founding of this country and the European colonization of the Western Hemisphere.

"An NBC News report that Stephen Miller, President Donald Trump’s senior adviser and immigration policy architect, called for a show of hands among senior officials on separating children from parents is being called “a damning display of white supremacy” and a repeat of crimes against humanity seen through history.

In a meeting of 11 senior advisers, Miller warned that not enforcing the administration’s "zero tolerance" immigration policy “is the end of our country as we know it" and that opposing it would be un-American, according to two officials who were there.

When senior administration officials raised their hands and voted in favor of separating children from their migrant parents, they failed to speak against Miller's assertion or its consequences, said Brown University historian Monica Muñoz Martinez.

The vote on the child separations “is just one of those examples of people in power sitting behind desks and making decisions about what kinds of harm they’re going to inflict for political purpose, and the consequences have been horrific,” said Martinez, author of “The Injustice Never Leaves You,” which chronicled government anti-Mexican American and and anti-Mexican violence in Texas.

Miller, administration officials told NBC News, "saw the separation of families not as an unfortunate byproduct but as a tool to deter more immigration. According to three former officials, he had devised plans that would have separated even more children."

No one who attended the meeting argued on the children’s behalf or on the humanity or morality of separating the largely Central American families.

The White House denied to NBC News that the show-of-hands vote took place, saying, “This is absolutely not true and did not happen.”

Almost 3,000 children were separated from their parents during the administration's zero tolerance policy.

Miller’s promotion and espousing of white nationalist ideas is known: It was demonstrated last year in a trove of emails released by the Southern Poverty Law Center, a civil rights group that tracks white supremacy groups. Miller cited and promoted white nationalist ideologies of white genocide, immigrants as criminals and eugenics. Those emails led to demands from many Democratic lawmakers and others for Miller to step down, which has not happened.

The vote and the subsequent child separations are “a damning display of white supremacy in action,” said Julián Castro, who served as President Barack Obama’s housing secretary.

Castro said the administration officials' vote is bizarre, particularly since former Homeland Security Secretary Kirstjen Nielsen — the Cabinet secretary whose agency would have had the primary responsibility of carrying out the policy — had strenuously objected to the separations. She was outvoted.

“That’s what happens when you put white supremacists like Stephen Miller in charge of policy and give them free rein to change important policy when it comes to immigrants," Castro said.

Nielsen had repeatedly expressed concerns before the meeting about losing track of children and did not raise her hand in favor of the plan, according to the officials in the meeting. But she later signed the memo that set in motion the prosecutions of migrants, including parents with children who would be separated.

Martinez noted that when attempts are made at reconciliation after human atrocities, a clear record of what took place is needed. The American public shouldn’t be pulled into denials that the vote happened, she said.

“One of the ways governments hide their crimes is by not leaving a clear record, or by leaving a record that justifies their violence by covering their crimes or describing victims as criminals or dangerous,” she said.

Rep. Nydia Velázquez, D-N.Y., reacted to the revelations Friday with a tweet that said, “The cruelty has always been the point.”

The cruelty has always been the point.https://t.co/lCJKKe2Rsj

Before rolling out the zero tolerance policy across the southern border, the Trump administration tested it in El Paso, Texas.

The congresswoman who represents El Paso, Rep. Veronica Escobar, D-Texas, has been one of the most vocal in Congress to call for Miller’s resignation and to blast Republican silence on Miller’s espousal of white nationalist ideologies.

In a tweet Thursday, she quoted the NBC News story regarding the vote and stated, “What followed is a dark chapter in America’s history. The family separation policy inflicted harm and pain on thousands of children and corroded our deepest values.”

What followed is a dark chapter in America’s history. The family separation policy inflicted harm and pain on thousands of children and corroded our deepest values. https://t.co/TgkGgy0NFA

Martinez said the U.S. will have to create a truth and reconciliation commission to deal with consequences to people affected by the policy Miller pushed and the Trump administration enacted.

The "crimes against humanity" that have been inflicted along the border, Martinez said, are happening outside public view.

“The burden for calling for justice,” she said, "has fallen on the victims themselves and their attorneys, the advocates for immigrants and refugees and the doctors who cried out and said this is child abuse.”