‘Who are we willing to sacrifice?’: teachers’ fears grow as US schools plan reopenings | Education | The Guardian 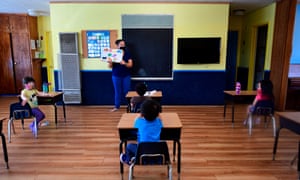 Two weeks into the school year, the school district of Gwinnett county, Georgia, plans on reopening schools for in-person learning on 26 August, with staggered schedules toward fully reopening schools. With the coronavirus still far from under control, the plans are provoking a heated debate, one that is blazing across the US.

During a school board meeting in July over school reopening plans, Louise Radloff, the county school board chair, was caught on a hot mic telling another member, “I could strangle him”, in reference to another board member arguing in favor of starting school virtually. She has since apologized.

Opponents’ fears are justified. Gwinnett county has reported more than 20,000 Covid-19 cases, with local infections rising over the past few weeks. Worried teachers have been holding caravan protests against in-person school reopenings.

“The district’s plan sends a clear message that any risk we incur for face-to-face learning is worth it, even if it could mean death,” said David Battle, a middle school teacher in Lawrenceville, Georgia. “Who are we willing to sacrifice for face-to-face instruction?”

Georgia and Florida recently set records for single-day Covid-19 deaths. State officials in Florida issued a state order that schools must reopen in person in the fall despite surging cases throughout the state. Though some of the state’s largest school districts have received state permission to begin school virtually, large school districts like Orange county in the Orlando, Florida, area are still being forced to reopen school in person after two weeks of virtual learning.

The Orange County Teachers Association has declared an impasse in negotiations with the district over reopening plans and is suing the district to keep virtual learning in place.

“Based on the numbers in Florida it is simply not safe to open,” said Gail Weston McDonald, a middle school teacher outside of Orlando. She has severe asthma and was able to receive a doctor’s note to be approved to work from home. “Sadly the students who will be forced to go to school will be students from lower-income families, putting their lives in danger.”

Jeffrey Barrois, an elementary school teacher in Jefferson parish outside New Orleans, Louisiana, said his school already had a positive coronavirus case reported while teachers are attending development and training sessions ahead of in-person classes resuming on 26 August.

“They didn’t tell us who the person was. They said there are protocols involved, how they determine who has and hasn’t had close contact, an answer to how, I’m not exactly sure,” said Barrois. “The word ‘strike’ has been used, but we haven’t had an official position taken by our union local.”

The district’s plan sends a clear message that any risk we incur for face to face learning is worth it, even if it could mean death

In Ohio, 38% of school districts are restarting the school year with full-time scheduled classes in person. Lisa Batten, a sixth-grade science teacher in New Lebanon, explained teachers are buying their own personal protective equipment ahead of her school reopening with a hybrid model on 31 August.

“I’m trying to make things as safe as possible. I’ve personally been stocking up on different masks. We only received one mask. Teachers are buying their own stuff,” said Batten. “My biggest concern is are we going to lose a student or teacher? That’s what scares me the most.”

School districts in most major cities and metro areas around the US are beginning the 2020-2021 school year with virtual learning for at least the first few weeks of school pending the state of coronavirus cases in their areas.

But several school districts have begun or plan to resume in-person learning. The openings come after pressure from the Trump administration to open up. “SCHOOLS MUST OPEN IN THE FALL!!!” Donald Trump declared on 6 July. He has threatened to take away funding from schools that don’t open and called teachers’ union leaders “disgraceful” for opposing his plans.

Once the center of the coronavirus pandemic in the world, New York City is planning to begin to reopen schools in person in September, despite concerns and criticism from teachers.

“I’m frustrated because Governor [Andrew] Cuomo and Mayor [Bill] de Blasio appear to be prioritizing the economy over safety,” said Ronnie Almonte, a biology teacher and union delegate in New York City. “My fear is that come September, those returning to the city will cause cases to increase, and school reopening will accelerate that increase and overburden our healthcare system again and cause death, and a repeat of March and April.”

He explained teachers were concerned over medical accommodations not being permitted to teachers and staff for at-risk household members, how hybrid learning will work, and concerns over lack of ventilation in schools that have traditionally suffered a lack of cleaning supplies such as soap. In March 2020, schools were not closed until 16 March, as 74 public school employees in New York City died of coronavirus.

In March, when they shut down schools, it left a lot of teachers scarred. A lot of educators died

“In March, when they shut down schools, it left a lot of teachers scarred. A lot of educators died and a lot of our students had family members die and it was clear the virus was spreading because schools were open, and schools were left open longer than most jurisdictions in the US,” said Andrew Worthington, a high school teacher in Manhattan and union chapter leader at his school.

Worthington explained teachers were struggling to plan for the school year because there is no set school calendar yet and it remains unclear how many students will be opting for virtual learning over in person and how lunches for students in classrooms will work. Teachers in New York City conducted sickouts in March before schools were shut down and are considering using sickouts again to protest against school reopening plans.

“Our government at a federal level and local level hasn’t done enough still to get the pandemic under control, and make it safe for us to be in school buildings with our students,” said Monique Dols, an early childhood special educator in the Bronx. “Our biggest concern is that the school buildings become an avenue for the coronavirus to spread again like what happened in March.”

‘Who are we willing to sacrifice?’: teachers’ fears grow as US schools plan reopenings | Education | The Guardian
Posted by John H Armwood II at 7:11 AM