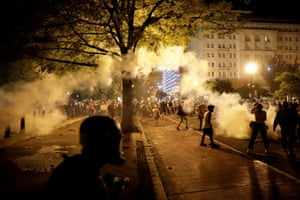 "There’s no fitting comparison for the sensation of tear gas.

I can tell you that the chemical weapon, banned from use in war efforts, does indeed burn the skin, nose, and eyes – but the burning isn’t simple. It invades all sense of comprehensive thought with a primal and terrifying urgency. Surrounded by gas and the chatter of rubber bullet guns, and the ominous thrum of officers beating their riot shields with batons, the burning becomes more like a vice grip around your throat. It feels possible you may die there on the pavement in a cloud of smoke, possible you may call out for your mother, or more likely: “Milk! Milk, please!”

You won’t be able to process quickly enough who approaches you, pulling off your shirt. They remove your contacts so you don’t go blind, then pour milk or Maalox in your eyes. By some miracle, this transaction provides relief for a few moments, then you must get back on your feet and run from police batons and elbows and knees again, though you are just starting to catch your breath.

For the 100 days since George Floyd’s death, police have replied to mass protests with chemical weaponry and repression tactics, most recently in Kenosha, Wisconsin. As this violence against largely peaceful protesters seems to have no end in sight, it scares me that when we talk about tear gas, we don’t talk about burning mouths and blinded eyes. It scares me that the bones broken by the fists and batons of police are “sustained non-lethal injuries”, not gruesome, splintered bones. And, officials offended by charged terms such as kidnapping would like us to instead use the term “lawful detainments”. But under federal and state law, kidnapping is commonly defined as the unlawful transportation and confinement of a person against their will.

By that definition, John Parks was kidnapped by police and armed federal forces on 29 July in Portland, Oregon. “I was surrounded by men in camo, and black,” he told me, with tense inflection, “They put me in the back of an unmarked vehicle and refused to tell me why I was being detained.”

Parks is, by his own words, an unmistakable figure in the movement, “I wear a blue and black helmet, I dress eclectically, and I have severe burn scars on the larger parts of my body.” The long time local resident and activist was dragged into the back of a van by unidentifiable men at the height of the unrest, and after other kidnappings had been reported and one caught on video went viral.

“I don’t want to say I felt fear, because I didn’t want to start freaking out. I had to keep a level head,” he said. “ [One of the federal officers] was looking at me, in my eyes, while I asked him questions. He was just silent. Silent.”

I remember that same silence from my own kidnapping.

In 2014, after the murder of Michael Brown, I slept very little and stayed in the streets of my community, rising to a considerable level of leadership and visibility when I was only 19 as part of a Black-led racial justice collective. I was the youngest of the lead organizers, sometimes the loudest. We’d gathered during the largest national Black Friday sales disruption at the height of the initial Black Lives Matter uprising, following the grand jury’s decision not to indict the officer who murdered Brown.

I remember being excited that so many were joining us at the die-in that day. I remember ensuring folks that our die-in was an inherently peaceful gathering, and some people had brought their children along to participate in civil disobedience.

But, to my surprise, dozens of cops showed up. Some were heard saying, “That’s not her, not her,” as they stepped over the bodies of other participants, then found their way to me.

I was forced into the back of a police wagon where I was kept alone and, save my cuffed wrists, unrestrained as the wagon drove wildly all over the city for nine hours. I kept my feet braced on a cold metal bench and sang freedom songs to steel my nerves. Once, officers parked the wagon in what looked like a vacant loading dock and played music loudly while making lewd references to my body and the holes in my shirt. When I sang, they laughed, and it took everything not to cry in fear and rage. That is all I can remember; brief snapshots of a long night I wasn’t sure I’d survive. Eventually, I was turned over to the Atlanta Detention Center. I was never formally charged.

Maybe decontextualized, my ride with multiple officers of the law, who made veiled threats and lewd comments about my body and the holes in my shirt, let their hands linger on the small of my back, and sat me in the dark backside of an abandoned loading dock, maybe all of that isn’t as terrifying on paper as it was in real life. But the context, of course, is that we live in a country where Black people’s bodies are brutalized for the most mundane things. I was a Black woman in the hands of police against the context of thousands of women accusing police of sexual assault in the past decade. The context is that our nation was roiling then and is roiling still with the righteous fury of protesters and the indignant rage of bigots in and out of uniform.

Police abductions are not lawful detainments; they are targeted attempts to intimidate activists and communities organizing to end policing as we know it.

“I feel proud of Portland,” John Parks tells me. “What we’re doing. People keep showing the fuck up.”

None of us asked to be where we are: fighting an overwhelmingly uphill battle toward abolition and equity, even as fascism takes a stronghold on the highest seat in the nation. But we are here. Though the cameras have moved on to the other federal scandals that plague the American public, protests continue day and night. Not just in Portland, but in Louisville, in Kalamazoo, and countless other cities around the country. We were just called to action, yet again, in Kenosha.

Police abduction of activists should always be a headline, always treated like a state-sanctioned threat. This act is a malignant tactic employed by local and federal governments, on an issue most central to what we are fighting for: Black lives. The freedom to be considered valuable and treated as such by our peers and this nation. The freedom to live without fearing the violence of police terrorism. That is what we are fighting for. Fighting, despite what police across the country are doing to deter us."

I was kidnapped by police for nine hours for being a Black Lives Matter protester | World news | The Guardian
Posted by John H Armwood II at 7:28 AM