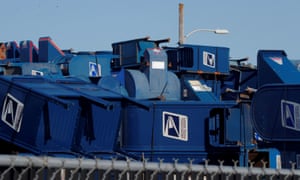 USPS mailboxes in a storage lot of a sandblasting and painting company in Hartford, Wisconsin. People who live nearby said the pile had grown noticeably larger in recent weeks. Photograph: Brian Snyder/R

USPS mailboxes in a storage lot of a sandblasting and painting company in Hartford, Wisconsin. People who live nearby said the pile had grown noticeably larger in recent weeks.

Some election officials are receiving a flood of questions from voters suddenly concerned about whether or not their mail-in vote will count, an alarming signal of how Donald Trump’s efforts to hamstring the United States Postal Service (USPS) are already causing considerable confusion and undermining confidence in the 2020 election.

Trump admitted last week he opposed additional funding for the USPS because it would make it more difficult for the agency to support mail-in voting this fall. There have been reports of significant mail delays across the country in recent weeks, a problem postal workers and Democrats have attributed in part to operational changes imposed by Louis DeJoy, the postmaster general and a major Republican donor. Facing tremendous scrutiny over the changes, DeJoy announced Tuesday he was suspending the changes until after the election “to “avoid even the appearance of any impact on election mail”. Despite that pause, it does not appear that DeJoy will replace mail-sorting machines, mailboxes and other equipment reportedly removed from postal facilities.

But, regardless of DeJoy’s announcement, the damage to voters’ confidence may already have been done. Forty-five per cent of Americans believe the 2020 vote count will be accurate, a drop from the 59% who believed so in 2016, according to an NBC/Wall Street Journal poll. Seventy-three per cent of Republicans believe that votes cast by mail will not be counted accurately, the poll found.

In Douglas county, Kansas – a Democratic stronghold home to the University of Kansas – hundreds of voters called the office of Jamie Shew, the county clerk, with concerns last week about whether their mail-in ballot will be delayed in the mail and ultimately counted because of problems with the mail. The calls were so frequent, Shew said, that the office receptionist was picking up new calls as soon as the person on the phone hung up.

Shew said his office had already received a record number of mail-in ballot requests for November’s election. But last week voters who requested mail in ballots as far back as May and June began asking whether they could cancel their requests and vote in person and had other questions about the process. In total, about 20 voters followed through and cancelled their requests.

“It’s frustrating. We’ve been doing a lot of things to try and build trust,” said Shew, whose office recently enacted a program allowing voters to track their ballots. “Election administrators like myself have worked for years to build up this system and then within a few weeks, the distrust of the system occurs because of, you know, politics.”

Shew said he was counting on a significant number of people to vote by mail because he faces a shortage of election workers necessary to hold in-person voting. He’s been reassuring voters that the county’s absentee ballot program is secure and that their mail in vote will count. He also ordered more secure drop boxes where voters can leave their ballots.

Many election officials like Shew are eyeing official dropboxes as an alternative to the post office for voters to return their mail-in ballots without relying on USPS. But Trump opposes drop boxes too – his campaign is suing to block Pennsylvania from using them.

Protesters hold placards during a press conference in front of the post office, in Pasadena, California. Photograph: Étienne Laurent/EPA

Voters have been calling election officials in Tarrant county, Texas, home of Fort Worth, with similar questions about mail-in voting. One 83-year-old woman who hasn’t left her house in three months cancelled her request because she didn’t believe she could trust the post office, said Heider Garcia, the county’s election administrator.

Garcia said his office has been reminding eligible voters that they can submit their absentee ballot requests now and that Texas begins mailing voters ballots 45 days before election day. He’s also been emphasizing that this year the state is allowing voters to personally return their ballots to election offices to the early voting clerk before election day (it usually only allows this on election day).

In Polk county, Florida, where there was a primary on Tuesday, about 150 voters have called the election office with questions about their mail-in ballots over the last two weeks and around 24 cancelled requests, said Lori Edwards, the county supervisor of elections. The voters are concerned about their ballots arriving in time and whether or not they can still decide to vote in person after requesting a mail ballot (they can in Florida). Officials have been looking up voters’ ballots to see whether they arrived and telling them about drop box options.

And in Virginia, hundreds of voters called the state board of elections on Friday to inquire about how to void their absentee ballot request, according to the Washington Post. (Voters in the state can bring their mail-in ballot to the polls to have it voided before they vote in person).

Even though experts consider mail-in voting to be secure and reliable, fears have grown in recent weeks amid widespread reports of postal workers being told to leave the mail behind and sorting machines being moved from postal facilities. Trump has railed against the practice, falsely saying it will lead to widespread fraud, even though there’s no evidence that’s true.

The Ohio attorney general, Republican Dave Yost, warned Trump that changes at USPS could greatly undermine confidence in the election.

“Whatever reform is needed at the Postal Service, it cannot come at the expense of our faith in the 2020 election,” Yost wrote in a letter to Trump this week. “Anything less than full confidence in the timely receipt of all timely mailed absentee ballots will rob the winners of an honest victory and the losers of the peace that comes from a fair defeat. Our country cannot take any more of that.”

Shew, the county clerk in Kansas, said he worried about what would happen after the election if Americans did not believe the result was legitimate,

“The ability to choose your leaders, as [Lyndon Johnson] said, is the most fundamental part of our republic,” he said. “If we continue to sow distrust in it, what happens when we no longer believe it is valid?”

Trump's USPS attacks are already undermining confidence in vote by mail | US news | The Guardian
Posted by John H Armwood II at 7:07 AM