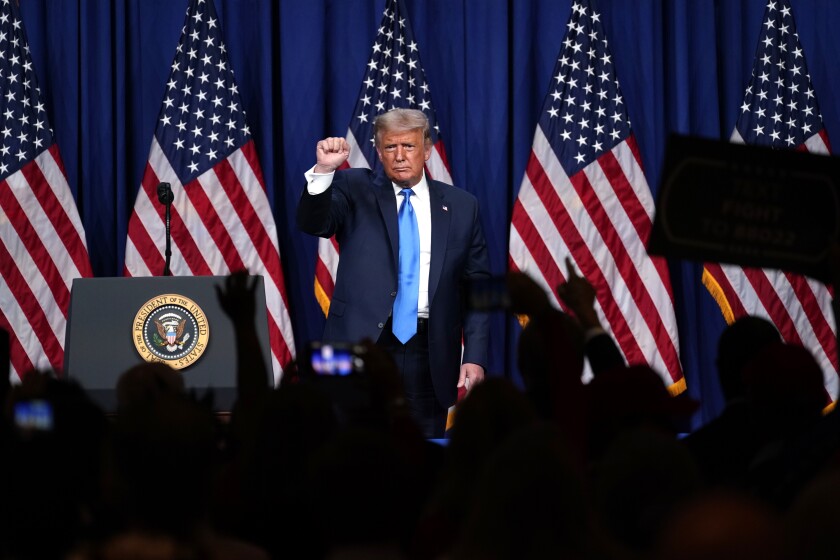 "President Trump is almost surely violating the law and certainly violating the norms of the office in giving his acceptance speech at the Republican National Convention from the South Lawn of the White House. But we have become so inured to Trump’s behavior that this will likely produce little more than a shrug.


Federal law, specifically the Hatch Act, is clear that federal employees cannot participate in partisan political activities. The Hatch Act, adopted in 1939 after it was revealed that employees of the federal Works Progress Administration had been involved in congressional election campaigns the year before, broadly forbids federal civilian employees from engaging in political activities.
The Supreme Court has upheld the law as constitutional, even though it dramatically limits the speech and political activities of government employees. The court explained the importance of keeping federal employees from feeling pressured to engage in political work and of preventing officeholders from using federal workers to help their campaigns.
When asked last week about giving his speech from the White House, Trump responded, “It is legal. There is no Hatch Act because it doesn’t pertain to the president.”
He is right that the Hatch Act does not apply to the president and vice president, but that misses the point. Inevitably, White House staffers will have to be involved in the logistics for setting up and delivering the speech.
Even if the employees voluntarily choose to work on this, it would still violate the Hatch Act. Federal employees are flatly barred from participating in political activities. And pressuring them to do so is a criminal violation under the law.
This is not a close question and it is not a political one. When asked about Trump giving his acceptance speech from the White House, Sen. John Thune (R-S.D.) said, “I think anything you do on federal property would seem problematic.” He stressed that federal government employees must refrain from participating in partisan political activities. Likewise, Texas Sen. John Cornyn, a conservative Republican, said, “I would have to have somebody show me where it says he could do that. I would think on government property would be problematic.”
This is not the first time the Trump administration has violated this statute. Last year, the U.S. Office of Special Counsel, the federal agency that monitors Hatch Act violations, sent a letter to the president detailing numerous violations by Kellyanne Conway, counselor to the president. “Ms. Conway has repeatedly violated the Hatch Act during her official media appearances by making statements directed at the success of your reelection campaign,” the letter read in part. Special counsel Henry J. Kerner, a Trump appointee, recommended terminating Conway, saying that her actions “if left unpunished, send a message to all federal employees that they need not abide by the Hatch Act’s restrictions.”
Trump did not follow the recommendation, and when asked about it by a reporter, Conway responded, “Blah, blah, blah. If you’re trying to silence me through the Hatch Act, it’s not going to work. Let me know when the jail sentence starts.” (Conway announced this week that she will leave the White House at the end of the month for unrelated reasons.)
Such blatant disregard of an important statute should be enormously disturbing, but the Trump administration doesn’t care. In fact, it has quietly gutted the federal agency, the Merit Systems Protection Board, that is responsible for enforcing this law. The board also enforces civil service protections for federal workers, including whistleblower safeguards.
But since 2019, the Merit Systems Protection Board has had no members, and it had only one member from 2017 to 2019. President Trump is responsible for appointing its members, but he has not done so, effectively nullifying the agency and its enforcement of crucial federal laws.
An underlying concern of the Hatch Act is that it is wrong for an incumbent to use the resources of the federal government, its employees or its financial resources, to help an election campaign. It is not fair and it distorts the democratic process. Yet that is exactly what Trump is doing by using the White House to deliver his acceptance speech.
Another federal law prohibits use of partisan activities in federal buildings. Trump claims that the South Lawn at the White House is part of the residence and therefore this is permissible. But that is a distinction that makes no sense; all of the White House is a federal building. And the convention also aired a video Monday of Trump meeting in the White House with U.S. hostages held abroad that he helped bring home.
Besides the law, the strong norm, for both Democratic and Republican presidents, is that they have not used the White House for blatantly political events. Obviously, drawing a sharp line is difficult when a president is running for reelection. But wherever that line is drawn, using the White House as part of a political convention crosses it. It was wrong in 1940, when President Franklin Roosevelt accepted the Democratic nomination by radio broadcast from the White House, and it is wrong today, which is why other incumbents have not staged campaign events there.
This is just the most recent of so many instances of Trump flouting federal laws and the norms of the office. He will do what he thinks will help him get reelected no matter what. But shouldn’t all the rest of us care about this disregard of the most basic tenet of the rule of law: that no one, even the president, is above the law?
Erwin Chemerinsky is dean of the UC Berkeley School of Law and a contributing writer to Opinion.