'Four days to defend the indefensible': Republicans seek to sell Trump to the nation again | US news | The Guardian 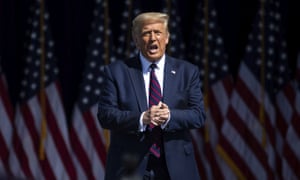 "Buffeted by America’s most severe public health and economic crises in decades, Donald Trump will this week stand before the Republican party and again seek to persuade the nation that he alone can fix it.

The celebrity salesman stunned the political establishment four years ago when he won the Republican primary, diagnosed the nation’s ills and told convention goers: “I alone can fix it.”

At the 2020 Republican national convention, which begins Monday, he will be nominated by the party for a second term as US president and, in a break from tradition, deliver his acceptance speech on Thursday from the south lawn of the White House.

Organisers of the Republicans’ first virtual national convention face an uphill task, and not only because the Democrats’ technically slick version last week is a tough act to follow. They must pitch Trump to the American public during a pandemic that has ripped 170,000 lives from families and communities. In an era of negative partisanship, they will also seek to whip up fears that Democratic nominee Joe Biden and running mate Kamala Harris pose an existential threat to the American way of life.

“The problem is what the Democrats did last week, and I think did very effectively, is confirm that this election is a referendum on Donald Trump’s presidency,” said Michael Steele, former chairman of the Republican national committee. “Trump now has to beat that narrative back and then give them a reason why it’s a choice election between what he’s done – tax cuts, et cetera – and what Biden will do, and I just don’t get the sense that the voters are going to buy that.”

The duelling conventions will leave Americans in no doubt of the stark choice facing them in November’s election. Where Democrats last week embraced the Black Lives Matter marches against racial injustice, Republicans are set to champion slogans such as All Lives Matter and, rallying in defence of police, Blue Lives Matter.

Where Democrats celebrated women’s rights and highlighted victims of gun violence, Republicans will surely demand restrictions on abortion and loudly proclaim the right to bear arms. Where Democrats vividly presented America as a nation of immigrants, Republicans’ less diverse lineup is likely to emphasise Christian faith and nostalgia for a simpler time.

Lara Trump, the president’s daughter-in-law and a senior adviser to his campaign, told NBC News’s Weekend Today: “I think what you’re going to see is a very different depiction of America. What we saw last week from the Democrats, really their entire convention was about bashing Donald Trump, and it was a dark, dismal and really depressing vision of America I think that they presented.

“We are going to have the opposite. Ours will be hopeful and inspirational and patriotic, and you want people at the end of our four days to be reminded that America continues to be the greatest, most exceptional nation in the world. So we’re very excited for it.”

Trump will appear every day and few would bet against him touting progress on his wall at the US-Mexico border, promising to defend law and order in suburbs or throwing other red meat to this base.

He is also determined to push back at the charge that his downplaying of the virus cost tens of thousands of lives and millions of jobs. At one event he will honour doctors, nurses and other front line workers in the fight against Covid-19, the Reuters news agency reported. He will claim that he built a great economy once and can do so again.

Newt Gingrich, a former Republican speaker in the House of Representatives and author of Trump and the American Future, said: “If you had taken the world of February and if that had sustained, Trump right now would be cruising to a Ronald Reagan/Richard Nixon-style reelection. I think that because of the Chinese virus and because of the challenges inherent in closing down the economy and then having the government impose social isolation that it became dramatically more difficult.

“The amazing thing to me is if you look at the 92% or 93% negative coverage by the propaganda media and then you look at the challenge of the virus and the economy and the social dislocation of having people locked down, it’s astonishing to me that Trump’s as strong as he is.”

Delegates will hold an in-person roll call on Monday in Charlotte, North Carolina, the originally planned convention venue, to formally nominate Trump. But the main action will be on screens, fittingly for a reality TV president with an eye for camera angles. A four-day carnival of flag-waving patriotism is promised under the theme “Honoring the Great American Story”, with Monday devoted to “Land of Promise,” Tuesday to “Land of Opportunity,” Wednesday to “Land of Heroes” and Thursday to “Land of Greatness”.

First Lady Melania Trump and two of Trump’s adult children will speak on Tuesday from the White House rose garden. Mike Pence, the vice-president, will be the lead speaker on Wednesday from Baltimore’s Fort McHenry, pivotal in the War of 1812 when it was defended against an attack by the British navy and inspired the poem that became the lyrics for The Star-Spangled Banner.

Some ethics watchdogs have raised concerns over the use of federal properties as stages for partisan political speeches, but a law barring the use of federal funds for campaign appearances excludes the president and vice-president. In 1940, President Franklin Roosevelt accepted the Democratic nomination from the White House via radio.

Like past incumbents before him, Trump will try to define his challenger as too much of a risk. At campaign rallies, his broadsides against Democrats usually get bigger cheers than his own record. It will be little surprise if he mocks Biden as a cognitively declining pawn of the radical left while pushing baseless conspiracy theories about his son Hunter’s business dealings in Ukraine.

Gingrich, 77, who addressed the 2016 convention in Cleveland, Ohio, added: “I’m reasonably confident that we’re going to beat them and probably beat them very badly. That’ll happen because one, the more you think about the idea of Biden as commander in chief, the more implausible it becomes and two, Harris’s voting record was the most liberal in the Senate, which means she was to the left of both Bernie Sanders and Elizabeth Warren. And she’s a terrible campaigner.”

The case will be pressed by Republicans tipped as contenders to succeed Trump in 2024 including Nikki Haley, his former ambassador to the United Nations; Tim Scott, the party’s sole African American senator; Kristi Noem, the governor of South Dakota; and the president’s son Donald Trump Jr, who relishes assailing the left and “owning the libs”.

The convention will also feature ordinary citizens testifying that Trump has changed their lives for the better. Among them will be Mark and Patricia McCloskey, a couple from St Louis, Missouri, who brandished guns in front of Black Lives Matter protesters marching through their gated community. They were charged with felony weapons offences, which Trump has branded a “disgrace”.

Other speakers include police Sergeant Ann Dorn, whose husband, retired police captain David Dorn, was killed during violent protests in June in St Louis; Tanya Weinreis, who will say her Montana coffee shop and employees’ livelihoods were saved by a loan from the federal coronavirus relief programme; the parents of Kayla Mueller, a humanitarian worker murdered by Islamic State; and Andrew Pollack, whose daughter Meadow was killed in the Parkland, Florida, school massacre in 2018, and who advocates for enhanced school safety measures including armed guards.

But critics believe they will struggle to change perceptions of Trump baked in over three and a half years of turmoil – and months of pandemic lockdown.

Steele, a former lieutenant governor of Maryland, said: “Donald Trump is down for a reason, not because of some bad policy rollout or some misstep here or there but the accumulation of what people have seen since the beginning of Covid-19. When you sit there and your response to 170,000 dead Americans is, ‘It is what it is’, people are going to say, ‘Oh, I get it you really don’t give a rat’s ass about it’.”

Steele added: “Then you counter that with what you heard from Biden this week where he says, yeah, it’s going to be hard work but I care enough to try, care enough that if we work together, we’ll get it done. Those are two competing views of the future and I think a lot more people are going to respond favourably to Biden coming off of this convention, which makes it harder for Trump going into his to figure out that sweet spot narrative.

“Trump wants to talk every day. Why? Because that’s all he knows how to do it: it’s got to be about him. He thinks the only way this thing turns around is if he forces everybody to listen to him and agree with him. America is more mature than that and now understands the bullying. Most playgrounds eventually come to understand that the bully is nothing more than someone with a lot of hot air and all you need is one quick hit in the nuts and it’s over. That’s effectively what Biden did this week.”

Former president Barack Obama used the Democratic convention to warn that American democracy itself is at risk. But Republicans paint the fate of America in no less apocalyptic terms. A big win for Democrats in the presidential and congressional elections, they may warn, would usher in oppressive socialism, high taxes, violent cities, open borders, political correctness and censorship of religious conservatives.

Trump offered a preview when he told a crowd in Pennsylvania this week: “At stake in this election is the survival of our nation, it’s true. Because we’re dealing with crazy people on the other side. They’ve gone totally stone-cold crazy.” Speaking in Arlington, Virginia, he added: “The future of our country, and indeed our civilisation, is at stake on November 3rd.”

The fervent crowds who chanted “Lock her up!” about Hillary Clinton at the 2016 convention will not gather this time, at least not on the same scale. But a dark and divisive onslaught is still expected at an hour when – perhaps just as well – most children will have gone to bed.

Moe Vela, a former senior adviser to Biden at the White House, said of the Republicans: “I feel sorry for them because they have four days to try to defend the indefensible. I don’t know exactly how to try to explain why your candidate is racist.

“Why is everything that he does and says hateful? Why does he lack every characteristic and trait that Joe Biden possesses: empathy, kindness, grace, humility, responsibility. I call it the Republican bullying convention. That’s what it will be for four days: bullying and name calling and trash and mud. I’m not watching.”

'Four days to defend the indefensible': Republicans seek to sell Trump to the nation again | US news | The Guardian
Posted by John H Armwood II at 12:12 PM