Opinion | Kenosha Tells Us More About Where the Right Is Headed Than the R.N.C. Did - The New York Times 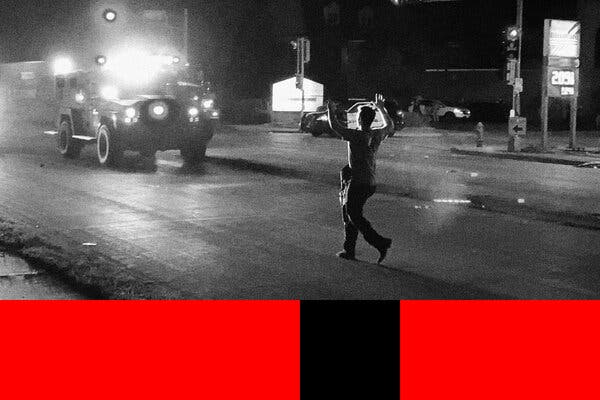 "The conservative media’s embrace of Kyle Rittenhouse speaks volumes about its priorities.

The most revealing thing to happen in conservative politics this week did not involve the Republican National Convention, at least not directly. Instead, it took place in Kenosha, Wis., in the aftermath of a shooting on Tuesday night that killed two people and wounded a third.

The suspected shooter, Kyle Rittenhouse, a 17-year-old from nearby Antioch, Ill., was in Kenosha with a group of armed counterprotesters. After several days of rioting — sparked by the shooting of Jacob Blake, a Black man who appears to have been paralyzed after police shot him seven times in the back — so-called militia groups arrived on the scene to defend businesses and other properties from protesters. Rittenhouse was with one of those groups when, according to a visual analysis by The New York Times, he was seen running away from several people.

Eyewitness testimony fills the gap. Rittenhouse was approached by Joseph Rosenbaum, who threw a plastic bag in his direction. He ran, and turned to face Rosenbaum with his AR-15 in the ready position. Nearby, an unknown gunman shot into the air. It’s at this point that Rosenbaum reached for the barrel of Rittenhouse’s rifle. Rittenhouse then fired four rounds, one of which struck Rosenbaum in the head. Rittenhouse then fled the scene. Several people chased him, some shouting to identify him as the shooter.

As Rittenhouse is running, he trips and falls to the ground. He fires again — four more shots — as several people run toward him. One of the people in that group is hit in the chest and falls to the ground. Another, who is carrying a handgun, is struck in the arm. Rittenhouse then gets up and walks toward several police vehicles with his hands raised. Although bystanders identify him as the shooter, police pass him by. Rittenhouse is arrested the next day, in Illinois. Authorities charged him with first-degree murder.

This is a complicated situation, but a few things are clear. Wisconsin isn’t a “Stand Your Ground” state, and Rittenhouse was in illegal possession of a weapon — under Wisconsin law, it is a Class A misdemeanor for a minor to carry a deadly weapon in the open. There is also no legal right in the state to use deadly force for the protection of property you do not own. And in any case the “Castle Doctrine” only applies to the use of deadly force in one’s home, vehicle or business.

To the conservative media, however, what happened in Kenosha was eminently justifiable and even cause for celebration. “Are we really surprised that looting and arson accelerated to murder?” Tucker Carlson said on the Wednesday broadcast of his Fox News show. “How shocked are we that 17-year-olds with rifles decided they had to maintain order when no one else would?” Carlson, who has an average nightly audience of more than 4 million viewers, blamed local political leaders for the killings. “Kenosha has devolved into anarchy because the authorities in charge of the city abandoned it. People in charge in Wisconsin from the governor on down refused to enforce the law,” he said. “They stood back and watched Kenosha burn.”

Ann Coulter, a conservative author and provocateur, said that she wanted Rittenhouse “as my president.” Graham Allen, a contributor to Charlie Kirk’s Turning Point USA, called the Kenosha killings a “justified shooting” in a video that has garnered more than 150,000 views. Katie Pavlich, another Fox News host, declared that, “When you have no police around to defend businesses, and people who are being attacked, then there is a void that is filled.” According to The Guardian, “fund-raisers, messages of support and celebratory memes” for Rittenhouse are being “shared widely” on social media platforms. And Paul Gosar, a far-right Republican congressman for Arizona’s 4th District, said it was “100% justified self-defense. Do not try to take a weapon away from a man or bear the consequences.”

What happened in Kenosha was a tragedy. Rittenhouse should not have been there, and we should agree — all of us — that the shooting should not have happened. We should also be troubled by police action, or the lack thereof, against armed militias. Tacit support from Kenosha police (at one point, an officer thanks the group for being there) almost certainly contributed to the permissive environment that led to the shooting. It is reminiscent, in that way, of the events in Charlottesville in 2017, where an official review found that law enforcement failed to “maintain order” and “protect public safety” leading to fights, skirmishes and the vehicular murder of a protester.

We should be appalled. But it appears only some of us are. Others are prepared to elevate Rittenhouse as a symbol of self-defense. It’s an ominous reaction, not the least because it might inspire other Rittenhouses to do the same, to travel to protests ready for the use of lethal force against protesters. Put differently, the extent to which Carlson and Coulter and Turning Point are representative of conservative thought on violence against protesters is the extent to which we may have to prepare for further Kenoshas.

I said, at the start, that these events lack a direct link to the Republican National Convention, the headline event for conservative politics this week. They do, however, have an indirect link. The night before the killings in Kenosha, Mark and Patricia McCloskey delivered a prime-time address from their St. Louis home as part of the convention’s opening program. The McCloskeys aren’t politicians or activists, they’re trial lawyers, famous for just one reason: brandishing firearms (Mark an AR-15, Patricia a pistol) at passing Black Lives Matter protesters. Their celebrity in conservative circles has everything to do with their threat of violence against people the president has denounced as a threat to the country itself. However ridiculous the McCloskeys may have looked in the media, the fact of the matter is their actions led to a reward. For threatening protesters with death, they were given a chance to speak to the entire nation.

One other thing. Earlier this summer, as the first protests against the death of George Floyd unfolded, President Trump took to Twitter to warn of consequences for those who damaged property. “These THUGS are dishonoring the memory of George Floyd, and I won’t let that happen,” Trump tweeted on a Friday morning in May. “Any difficulty and we will assume control, but when the looting starts, the shooting starts.”

Although Trump backpedaled in the face of criticism — claiming, implausibly, that he was making a descriptive statement of what would happen if looting began — his meaning was clear enough: that “looters,” however defined, would and should be shot.

Opinion | Kenosha Tells Us More About Where the Right Is Headed Than the R.N.C. Did - The New York Times
Posted by John H Armwood II at 7:08 AM