RNC 2020: a two-hour glimpse into the upside-down world of Trump TV | US news | The Guardian 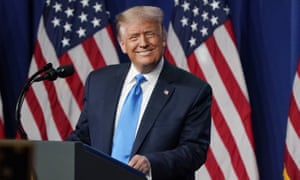 "There was once a theory that Donald Trump’s first run for president was a merely a stunt to help him launch his own TV network. On Monday the world finally got two and a half ghoulish hours of Trump TV. It was a lesson in the medium’s power in the art of make believe, especially of the Soviet kind.

The first night of the Trump national convention – sorry, Republican national convention – was proof how the 166-year-old party of Lincoln, Eisenhower and Reagan has become a personality cult. Speaker after speaker paid homage to the absolute monarch as if competing to outdo one another for obsequious sycophancy.

There is no Republican policy platform this year other than “the party’s strong support for President Donald Trump and his administration”.

Trump TV had two other crucial components. One was the type of propaganda that would make Fox News blush and had fact checkers scrambling, for example a selectively edited video segment on the coronavirus pandemic that trashed Democrats, claimed, “One leader took decisive action to save lives,” and made no reference to Trump’s repeated predictions that the virus will “just disappear” nor his suggestion that patients be injected with disinfectant.

Only on the upside down Trump TV channel could a Covid-19 death toll of more than 175,000 – far higher than any other country in the world – be an argument for reelection.

The other predictable theme was pornographic scaremongering about Democratic candidate Joe Biden and – in an endlessly repeated phrase – “the radical left”. Despite Trump’s promise that the evening’s programming would contain “something very uplifting and positive”, speakers portrayed the prospect of a Biden victory as the stuff of dystopian nightmares, sometimes with racist overtones.

Charlie Kirk, 26, of the student group Turning Point USA, set the tone early on by describing Trump as “the bodyguard of western civilisation” under mortal threat. But it was Kimberly Guilfoyle, partner of Trump’s son Don Jr and former Fox News host, who stole the show with a high-octane audition for Evita – without an audience.

Standing in Washington’s cavernous Andrew W Mellon Auditorium, scene of Treasury Secretary Steven Mnuchin’s wedding in 2018, Guilfoyle screamed into the void about Biden and his running mate Kamala Harris: “They want to destroy this country and everything we have fought for and hold dear. They want to steal your liberty, your freedom. They want to control what you see and think and believe so that they can control how you live.

“They want to enslave you to the weak, dependent, liberal victim ideology to the point where you will not recognize this country or yourself.”

It was about as different as could be imagined from Michelle Obama’s calm, intimate address exactly one week earlier at the Democratic address. But it had a similarly dramatic message: whereas Obama and her husband framed the election as Trump versus democracy, the Republican pitch this week is America versus socialism.

Senator Tim Scott of South Carolina, the last speaker of the night, said: “Joe Biden’s radical Democrats are trying to permanently transform what it means to be an American.

“Make no mistake: Joe Biden and Kamala Harris want a cultural revolution. A fundamentally different America. If we let them … they will turn our country into a socialist utopia … and history has taught us that path only leads to pain and misery, especially for hard-working people hoping to rise.”

This was spoken in a tone more moderate than Guilfoyle’s so may have been more convincing to some. It also came from the only African American Republican in the Senate. There was a very obvious effort all night to counter charges that Trump is racist.

Former football player Herschel Walker, who is African American said: “It hurt my soul to hear the terrible names that people called Donald: The worst one is ‘racist’. I take it as a personal insult that people would think I’ve had a 37-year friendship with a racist. People who think that don’t know what they’re talking about. Growing up in the deep south, I’ve seen racism up close. I know what it is. And it isn’t Donald Trump.”

There were also contributions from Black Trump supporters Kim Klacik, a Maryland congressional candidate, and Georgia state representative Vernon Jones. In another counter-punch, Nikki Haley, the former ambassador to the UN, told how she was the proud daughter of Indian immigrants. “In much of the Democratic party, it’s now fashionable to say that America is racist. That is a lie. America is not a racist country.”

Such efforts were undermined, however, by Mark and Patty McCloskey, a white couple who waved guns at Black Lives Matter protesters outside their home in St Louis, Missouri. Their job was to voice Trump’s racist obsession with America’s suburbs, supposedly being under threat of invasion, violent crime and total destruction.

Sitting in a faux European medieval mansion, they knew how to push buttons. Mark warned: “The radicals are not content just marching in the streets. They want to walk the halls of Congress. They want power. This is Joe Biden’s party. These are the people who will be in charge.”

Patty addded: “They are not satisfied with spreading the chaos and violence into our communities, they want to abolish the suburbs altogether by ending single-family home zoning. This forced rezoning would bring crime, lawlessness and low-quality apartments into thriving suburban neighborhoods. President Trump smartly ended this government overreach, but Joe Biden wants to bring it back.

“These are the policies that are coming to a neighborhood near you. So make no mistake: no matter where you live, your family will not be safe in the radical Democrats’ America.”

RNC 2020: a two-hour glimpse into the upside-down world of Trump TV | US news | The Guardian
Posted by John H Armwood II at 7:39 AM