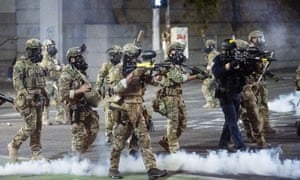 "The former acting director of the US Immigration and Customs Enforcement agency, which works under the Department of Homeland Security, has condemned the Trump administration’s handling of protests in Portland by deploying federal agents into the city.


John Sandweg, the former acting director of Ice, who also served as general counsel for the DHS, said Donald Trump was using the agency as his own “goon squad” by sending federal law enforcement agents to Oregon’s biggest city and vowing to send more to other cities around the country, including Chicago and Albuquerque.
Sandweg, in a wide-ranging interview with the Guardian, called the administration’s policy a “failure of leadership in the Trump administration”.
He added: “I think it’s an abuse of DHS. I mean really the president’s trying to use DHS as his goon squad. That’s really what’s going on here.”
The comments by Sandweg come as unidentified federal officials clashed again in Portland with protesters calling for reforms to the local police. On Wednesday the mayor of Portland, Ted Wheeler, joined protesters. He was teargassed along with others in the crowd. The federal agents have been accused of lifting people off the streets in unmarked cars, as well as deploying military-style uniforms and equipment as they battle demonstrators nightly in the city.
Sandweg went on to offer scathing criticism of the administration’s handling of the protests, calling it a “manufactured crisis” driven by politics from the president.
“In my experience, this is not coming from the workforce. I think there’s a lot of misconceptions out there that I hope that I can at least clear up,” Sandweg said. “DHS has not so much been unleashed as pushed to do these kinds of things. In my experience the folks that I’ve worked with want to protect national security and public safety.”
Sandweg also pointed to the department’s acting director, Chad Wolf, who has been seen as a driving force behind the deployment which has outraged Democrats, some Republicans and many civil rights groups.
“You have an acting secretary, if you will, who is in a very precarious position in that a number of his predecessors did not have that long a tenure, who I think is eager to please,” Sandweg said.
Sandweg said the case for federal law enforcement officers to guard federal buildings was pretty strong in principle.
“From a general position of course the federal government has a right to enforce federal law anywhere in the United States,” Sandweg said. “But again there’s a right way to do that and a wrong way. And what we’re seeing here is the kind of thing that is going to have devastating effects for DHS and its operating agencies for a long time to come.”
Asked to compare how the DHS is being used compared with during Barack Obama’s presidency, Sandweg said there was a big difference.
“It makes an incredible contrast. Listen, our overarching goal was to be effective. To do effective law enforcement work, to effectively secure the border, to promote public safety and national security, you have to have a great partnership with state and locals. And politics didn’t matter. The politics didn’t matter if you were Republican or Democrat,” Sandweg said, adding that the contrast also extended to the George Bush administration in the early 2000s.
Both of Oregon’s senators and other members of the state’s congressional delegation have called for an investigation into the administration’s handling of the protests.
Meanwhile, Governor Kate Brown said at a press conference on Wednesday: “This is a democracy, not a dictatorship. We cannot have secret police abducting people and putting them into unmarked vehicles. I cannot believe I have to say that to the president of the United States.”
In recent years some Democrats have argued for a major overhaul of federal bodies such as Ice or the DHS. Sandweg worried that if Joe Biden were elected president he might face significant pressure to makes drastic changes.
“What concerns me is that there’s going to be a lot of pressure on a President Biden to make really drastic reforms to DHS,” Sandweg said. “I don’t personally think those reforms are necessary. I think this is a crisis of leadership. A failure of leadership in the Trump administration. I think it’s an abuse of DHS.”
Sandweg added: “It’s a failure of leadership and at the end of the day here and the key thing is that they get a good, seasoned, good hand here to get DHS to return back to the culture of where DHS wants to be as an agency.”

Trump is using federal agents as his 'goon squad', says Ice's ex-acting head | US news | The Guardian
Posted by John H Armwood II at 11:27 AM