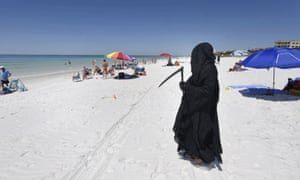 "On Friday, Governor Mike Parson of Missouri weighed in on the schools reopening debate by suggesting that children who contract the coronavirus will “get over it”.


“When they go to school – they’re not going to the hospitals. They’re not going to have to sit in doctor’s offices. They’re going to go home and they’re going to get over it … We gotta move forward,” Parson said in an interview on local radio.
If that surprises you, just consider that as early as April, the TV host Dr Mehmet Oz called reopening schools an “appetizing opportunity” – citing a Lancet paper that showed that reopening schools would “only cost us 2 to 3% in terms of mortality”.
Both join a long list of journalists, pundits and – importantly – politicians who have casually suggested that everyday Americans would be willing to sacrifice their lives for the US to reopen. Here’s a list.

Grandparents should be willing to die for America

Remember back in March, when we were barely into state-wide shutdown orders, and people were already eager for the US economy to reopen? One person, the lieutenant governor of Texas, Dan Patrick, felt particularly strongly about that: arguing the elderly should be sacrificed to make it happen.
Patrick, himself a senior citizen, said: “No one reached out to me and said, as a senior citizen, are you willing to take a chance on your survival in exchange for keeping the America that all America loves for your children and grandchildren?”

The American way of life versus the people

In April, Trey Hollingsworth, a congressman from Indiana, said it was time to choose between restarting the economy and saving lives – with a surprising answer as to which he thought was the “lesser of two evils”.
Referring to Covid-19 as a “biological challenge”, he said: “We do have a biological challenge in this problem but the economic challenge is growing and is much larger.
“Both of these decisions will lead to harm for individuals, whether that’s dramatic economic harm or whether it’s loss of life. But it’s always the American government’s position to say, in the choice between the loss of our way of life as Americans and the loss of life of American lives, we have to always choose the latter,” he told Indianapolis’s WIBC.

The people of Las Vegas offered up as a ‘control group’

In April, Mayor Carolyn Goodman of Las Vegas told CNN’s Anderson Cooper that she would be willing to offer up its people as a “control group” for reopening, saying that the shutdown orders had gone on too long.
Goodman was a staunch supporter of casinos reopening early in Las Vegas, telling MSNBC earlier that week: “Let the businesses open and competition will destroy that business if, in fact, they become evident that they have disease, they’re closed down. It’s that simple.”

Ah yes, the president. In March, just weeks into lockdown, Trump was already on Fox News talking about a great American resurrection – willing American businesses to reopen again by Easter. Then, at a White House press briefing on Covid-19, he spoke candidly with reporters about what sorts of sacrifices might need to be made.
“The whole concept of death is terrible,” the president said. “But there’s a tremendous difference between one per cent and four or five or even three per cent.”

The US politicians volunteering other people’s lives to fight Covid-19 | World news | The Guardian
Posted by John H Armwood II at 5:50 PM