'A slap in the face': how racial bias dogs US coronavirus response at every level | World news | The Guardian 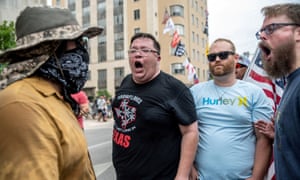 "Early this year, Jennifer Esteen noticed a sudden shift in personnel and supply priorities for medical facilities in the communities where she is an advocate for healthcare workers in California’s Bay Area.

The nurse recalled how, for years, calls to address healthcare inequities that left poorer neighborhoods and communities of color understaffed and underfunded mostly fell on deaf ears. But as warnings emerged about the looming coronavirus, by March came orders from state and local leaders on the stockpiling of supplies and acquisition of hospital personnel. Esteen considered it “insulting”.

“It was so remarkably fast and grand,” she said “It felt like a slap in the face to the workers who had been serving in understaffed facilities for all these years.”

As reports of community spread grew, trends in racial disparities among who was contracting and dying of the virus became clear across the country in places such as New Orleans, New York and Chicago.

Data from the Centers for Disease Control and Prevention, released after the New York Times sued the agency, confirmed what many had already known: of the nearly 1.5 million coronavirus patients in America thus far, Black people and Latino communities are disproportionately at risk of contracting and dying from the coronavirus.

Black and Latino people in America represent nearly a third of all cases and have been nearly twice as likely to die from the virus as their White counterparts. Many health experts contend the data underscores how racial bias shapes not just policy, but also public behavior during health crises.

Not only are Black and Latino Americans more likely to lack health insurance or live in areas without quality facilities, unconscious racial bias among medical professionals can also contribute to unequal health outcomes, with patients of color more likely to have their symptoms overlooked or pain disbelieved. Some experts point to people of color who later died of Covid-19 who were previously turned away as evidence of bias playing out in the pandemic.

Esteen argued “it’s no coincidence” that state priorities, pushed by the rhetoric of Donald Trump and his allies, pivoted to reopening after data confirmed these disparities.

“It’s telling our communities that they don’t matter and that their healthcare isn’t important enough to prioritize or invest in until the rich, or White people are affected,” she said.

“It blames them for their own health outcome and not the societal conditions that created it,” she said, adding that existing inequities in healthcare make people of color more susceptible, along with pre-existing conditions and a higher tendency to live in densely populated areas.

According to research from the AP and NORC Center for Public Affairs Research, Black Americans are most likely to know someone who has died of the virus, with 11% knowing a victim compared with 5% of Americans overall, and 4% of White Americans.

Bassett said that was to be expected when Black people are disproportionately affected, but argued that framing racial disparities as inevitable or normal is “rooted in bias”, allowing less-affected communities to see the outbreak as more distant, prompting them to grow more restless, and reckless.

“When people see themselves as less connected to affected demographics, it influences how they respond to healthcare guidance,” Bassett said. “That ability to dismiss calls to wear a mask or maintain a social distance as ‘other people’s problem’ is steeped in privilege.”

The survey found that while 88% of respondents said they avoided public and crowded places in May, that figure dropped to 69% in June according to the Covid Impact Survey.

Nearly all states instituted stay-at-home orders, banned large gatherings and closed businesses, severely disrupting the US economy. But as some defied those orders, accusations of unequal enforcement and racial profiling ignited in places like New York City.

Esteen sees bias play out first-hand in her community. As California’s Black and Latino residents were dying more often than any other race, she said it was residents in predominantly White communities in the Bay Area who would frequent public spaces without masks or social distancing.

She fears unequal enforcement grew as local rallies ignited in response to the killing of George Floyd, a Black man who was killed by a White Minneapolis police officer. Many experts warned that large demonstrations spanning several months could create a surge in the virus’s spread.

“But I was surprised and uplifted by protesters who were not just socially active, but socially responsible,” she said.

New research from the National Bureau for Economic Statistics found “no evidence” that Black Lives Matter protests caused a spike in the number of new Covid-19 cases. The study, which is not yet peer-reviewed, looked at data from 315 cities across the country, including 281 cities that had protests and 34 that didn’t.

“The data suggests that while there is a small uptick in the number of confirmed cases among the protesting population, that didn’t result in the increased community spread that people were concerned about,” said Dhaval Dave, the study’s co-author and a professor at Bentley University.

But the study also suggests that bias shaped public behavior in another way. Dave theorized that fears of racial tension and community warnings of upcoming demonstrations kept people in their homes.

“Those who were choosing to stay home in response to the protests increased their social distancing, creating a counter-effect,” Dave said.

Health professionals have linked relaxed stay-at-home orders and parties, not protests, to a rise in cases. That hasn’t stopped some state and national Republican leaders from casting blame on Black Lives Matter protests, and some have only now dialed back calls to reopen or passed legislation requiring masks.

Most states have reported a sharp rise in coronavirus cases, with some reporting record daily totals. Black and Brown communities face a disproportionate risk with the uptick, making up a majority of all frontline and service workers.

“Every single one of us is affected by racism,” Dr Bassett said. “It is so deeply ingrained in our history and institutions that when our society pushes reopening at some community’s expense, that sends the message that those people aren’t essential, they’re disposable.”

“You can’t reproduce a frontline or healthcare worker,” she said. “If we fall ill, who’s going to care for the next patient the day the virus comes to your community? Because it will.”

'A slap in the face': how racial bias dogs US coronavirus response at every level | World news | The Guardian
Posted by John H Armwood II at 7:52 AM