As a cop, I killed someone. Then I found out it happens more often than we know | Thomas Owen Baker | Opinion | The Guardian 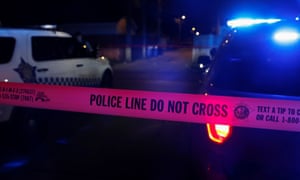 "In 2005, I joined the police department in Phoenix, Arizona. I became a police officer for the health insurance and economic security, and because the people I’d looked up to as a working-class kid had told me being a cop was a respectable career. I was married with two small children and saw policing as one of the few remaining paths to the middle class available to an army veteran without a college degree.


Becoming a police officer was an easy transition. As a former Army Ranger, the training, male-dominated culture and paramilitary structure of the police academy felt like home. I loved it, and became completely engrossed in police culture. I viewed myself as a member of a special brotherhood, protecting sheep from wolves.
I wanted to be respected by my new peers, so I worked to be perceived as a hard-charger. In patrol, I responded to as many dangerous incidents as I could. When nothing dangerous was available, I searched for suspects on an active list of people to arrest or conducted pretextual stops on suspicious vehicles. I was known as a “shit-magnet”: someone who was always finding stolen vehicles, guns and people who wanted to fight with the police.
There’s no feeling quite like entering a dangerous encounter and asking for your fellow officers to “step it up”, then hearing sirens in the background, knowing that your brothers and sisters are racing to danger and will do anything to protect you. I’ve never felt that way before or since. But my perceptions about my job and my identity began to change after something that happened about four years into my career.
At the time I was working a regular off-duty security job, which is common among cops. My partner and I were providing security for an apartment complex that had been experiencing a lot of crime. One night, about four in the morning, we received a domestic violence call from one of the apartments. We had been to the same unit the night before and had resolved a verbal altercation between a man and woman. While we were expecting something similar to the night before, we also knew there was a potential for violence. During our previous investigation we had discovered the man had a long history of violence and had fractured his victim’s arm during a previous incident.
When we arrived in front of the building there was screaming coming from the second-story apartment. As I ran up the stairs to the landing I could see blood on the floor. At the top, a man was yelling, “He has a knife,” and pointing to an open apartment door.
I drew my weapon. Inside was the man I had dealt with the night before. This time he was holding a large, bloody knife. Screams were coming from somewhere farther inside the apartment. I pointed my gun at him and told him to drop the knife. He yelled, “Let’s go, motherfucker,” raised the knife, and ran toward me.
I shot him twice in the chest. He hit the floor at my feet. He breathed heavily for a few moments, and then became motionless.
When I fired my weapon, it was like watching a movie of myself; I felt slightly outside my body, and I remember feeling relieved that I was responding the way I’d been trained. I kept my gun trained on the man’s body while my partner smashed a bedroom window and evacuated the family.
I was placed on three days of paid leave, required to visit a psychologist, and re-qualify with my gun before returning to work. The shooting was investigated by our version of internal affairs, by the homicide bureau, and by the county prosecutor’s office. All agreed that the shooting was justified: what many cops call a “clean” shooting.

After the shooting I felt, for the most part, fine. I’m ashamed to say that; it doesn’t feel like the response you’re ‘supposed’ to have after killing someone

Perhaps the only thing the left and right agree on, regarding police, is that we ask too much of cops. They’re correct

I’ve spent the last year reading over 1,700 accounts of police-related deaths. There is usually a complex combination of race, class, guns, violence, capital and other social forces that lead to the fatal encounter. Merely identifying a handful of bad officers and sending them to prison is not a sufficient solution. We must work toward a society where citizens and their governmental representatives – the police – aren’t so terrified of one another.
While I’m very critical of policing, it is worth acknowledging that things are improving, even if it doesn’t always feel like it. Police departments across the country are far more professional than in the past and many have made considerable progress in reducing the number of police-related deaths. In 1971, the New York police department shot and killed 93 people. In 2009, the NYPD shot and killed 12. This decline is the result of better training and more restrictive departmental policies, as well as the fact that American society has become less violent over time.
Perhaps the only thing the left and right agree on, regarding police, is that we ask too much of cops. They’re correct. Decades of deindustrialization have pulled the rug out from under a lot of Americans, and our social safety net is shamefully weak. Our society’s failings inevitably fall on to the police. Recently there have been calls to defund police agencies. It is critical that any attempt to do so coincide with a refunding of the social safety net that will be required to fill the void."
As a cop, I killed someone. Then I found out it happens more often than we know | Thomas Owen Baker | Opinion | The Guardian
Posted by John H Armwood II at 8:23 PM