Opinion | Where Is the Outrage? - The New York Times 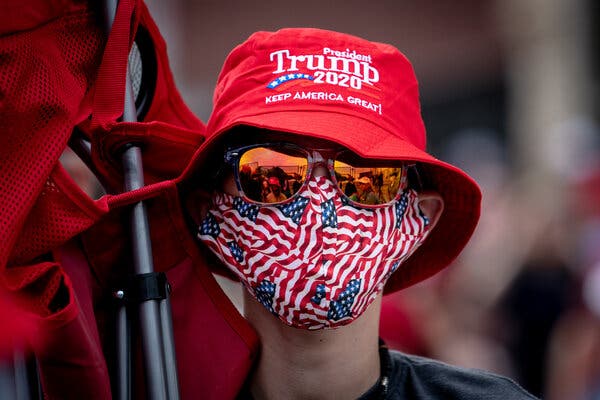 "Americans are getting sick and dying while Trump plays a political game.

It never ceases to amaze me how more people aren’t outraged, shocked and disgusted by Donald Trump’s cruelty and malfeasance.

Nearly 140,000 Americans are now dead because of the Covid-19 pandemic and more than 3,000,000 have contracted the disease. Furthermore, our outlook in this country is dire: Cases are surging and the number of dead continues to climb.

This is still the first wave; a second wave could simply pile on and be catastrophic.

And yet, Trump’s cronies are attacking Dr. Anthony Fauci, the nation’s leading infectious disease expert, demanding that all schools reopen in the fall even as the virus rages, and continuing to tell the lie that the reason we have more cases is because we have more tests.

Trump has so completely politicized the pandemic that people now routinely refuse to wear masks in public places, insisting that being compelled to wear them is an infringement on their rights.

Republican lawmakers for their part offer only the mildest contradictions to Trump’s deadly leadership, if they offer any at all.

Young people are now gathering at bars and parties, exhausted by isolation, and no doubt having absorbed some of the myth that they are invincible and the pandemic will be fleeting.

But instead of demonstrating leadership and doing the simplest and most effective things he could do — insisting on a nationwide mask order as well as ramping up testing and contact tracing — Trump appears to be doing the opposite.

“Trump in recent weeks has been committing less of his time and energy to managing the pandemic, according to advisers, and has only occasionally spoken in detail about the topic in his public appearances. One of these advisers said the president is ‘not really working this anymore. He doesn’t want to be distracted by it. He’s not calling and asking about data. He’s not worried about cases.’ ”

Trump is simply putting his head in the sand and attempting to wish the virus away, or lie it away, or let it take its victims until there are no more to be had.

And he doesn’t seem to want to know the true impact of the virus, nor does he want the public to know.

As The New York Times reported Saturday, Senate Republicans had crafted a proposal for yet another round of pandemic aid, this one including billions for more testing and contact tracing, as well as money for the Centers for Disease Control and Prevention and the National Institutes for Public Health, but the White House balked at these funding measures.

This obstruction will lead to more Americans dying.

Not to mention that the White House proposal for the new bill includes “eliminating a proposed $2 billion allocated to the Indian Health Service, which is responsible for providing medical care to more than half of the nation’s tribal citizens and Alaska Natives, who have been devastated by the pandemic and are particularly vulnerable to the virus,” according to The Times.

Add to this the fact that the administration has said that it might continue to separate children from their parents and hold the parents in detention facilities, even after a federal judge ruled that children should be released because outbreaks of Covid-19 had rendered conditions at the facilities unsafe and unconstitutional.

But the Trump administration has countered, “The remedy for a constitutional violation of conditions of confinement is to remedy the violation, not to release petitioners.”

Add to that the fact that the Trump administration submitted a brief last month asking the Supreme Court to overturn the Affordable Care Act in the middle of this pandemic, which would eliminate coverage for as many as 23 million vulnerable Americans.

And add to that the fact that earlier this month, as the Times reported:

“The Trump administration has formally notified the United Nations that the United States will withdraw from the World Health Organization, a move that would cut off one of the largest sources of funding from the premier global health organization in the middle of a pandemic.”

And recently, the Trump administration told states to stop sending their coronavirus data directly to the C.D.C. and to send it instead to the Department of Health and Human Services. As CNBC reported last week, “Previously public data has already disappeared from the Centers for Disease Control and Prevention’s website” following the move.

So again I must ask, where is your outrage? How is this happening? How is it being allowed to happen? Real people, Americans, are being allowed to get sick and die while Trump plays a political game. How long can this continue?"

Opinion | Where Is the Outrage? - The New York Times
Posted by John H Armwood II at 7:04 AM