Baraka says George Floyd protest in Newark is ‘appropriate,' will be attending - nj.com 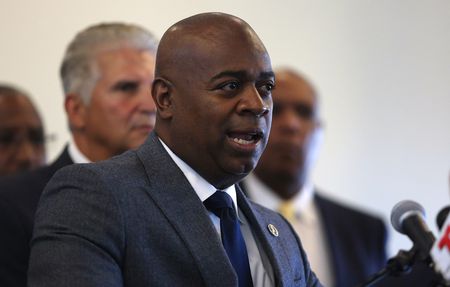 "Newark Mayor Ras Baraka on Saturday supported the George Floyd protest planned later in his city and said the group that is organizing it has been rallying against injustice peacefully for years.


People’s Organization for Progress organized a protest for 1 p.m. Saturday near the Veterans Courthouse in Newark. Protesters will be calling for police reforms after Floyd, a 46-year-old black man, died after a white Minneapolis police officer, Derek Chauvin, knelt on his neck for several minutes while handcuffed.
“People’s Organization for Progress has been having protests in our city for decades without incident, without issue all the time,” Baraka said on the steps of Newark City Hall hours before the protest was set to start. "They’ve been very consistent in fighting against the injustices that have been happening in our country.”
Newark has a history of racial tensions. The Newark riots in 1967 began after two white officers beat John Smith, a black cab driver, and rumors spread that he had died. The five days of unrest changed the course of the city’s history.
The mayor said he will be attending today’s protest, called Floyd’s death outright murder, and demanded that all the officers involved should be arrested. One officer, Chauvin, was arrested and charged with third-degree murder and second-degree manslaughter in the case.
“He was killed on purpose and murdered on purpose,” Baraka said.
People’s Organization for Progress Chairman Lawrence Hamm, who is also challenging Cory Booker for his U.S. Senate seat, noted the Fraternal Order of Police Lodge No. 12 is fighting the creation of the city’s civilian complaint review board in court. The board would have the ability to investigate claims of police misconduct separately from internal affairs.
“That case right now is being decided by the justices of the supreme court and I hope that those justices are watching what is going on in America today,” Hamm said as he joined Baraka at City Hall. “I hope that those justices are watching what is going on in America today.”
A Newark police officer earlier this month was put on desk duty after video surfaced of him punching a black man in the face. Another Newark cop was indicted after he repeatedly shot at moving vehicle last year during a pursuit and killed a man in the car.
The city’s police department is under federal review after the U.S. Department of Justice found a pattern of unconstitutional practices. The city agreed to a list of police reforms known as a consent decree."
Baraka says George Floyd protest in Newark is ‘appropriate,' will be attending - nj.com
Posted by John H Armwood II at 8:21 PM