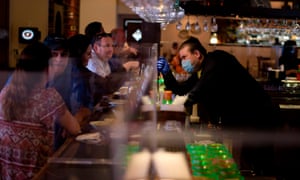 "More than half of all US states have reported a rise in new coronavirus cases, with some breaking daily records. Amid fears of a second wave of Covid-19 infections and deaths, public health officials have warned that the first is far from over.


“I think that wherever there’s wood to burn, this fire’s going to burn – and right now we have a lot of susceptible people,” Michael Osterholm, head of the University of Minnesota’s Center for Infectious Disease Research and Policy, told NBC on Sunday.
“I don’t think we’re going to see one, two and three waves. I think we’re going to just see one very, very difficult forest fire of cases.”
In Tulsa on Saturday, Donald Trump said he had asked officials to limit testing, in order to reduce numbers of new cases. On Sunday the White House dismissed the remark as a joke, but on Monday the president again said increased testing was a problem.
“It makes us look like we have more cases, especially proportionally, than other countries,” Trump tweeted.
According to tracking data from John Hopkins University, 29 states have reported an increase in their seven-day average of new cases.
Most new outbreaks are in states such as Georgia, Florida and Texas, which were among the first to launch reopening measures. Young people are especially at risk, with Florida governor Ron DeSantis warning cases have shifted in “a radical direction” toward people under 30.
Across southern states, health experts have blasted a lack of social distancing as the summer begins. Younger people, officials say, are also more often asymptomatic, putting immunocompromised friends and family members at risk.
The federal Centers for Disease Control and Prevention (CDC) has issued warnings on the need for social distancing and face masks as states reopen, rejecting Trump’s notion that an increase in testing is responsible for the spike.
But Americans remain divided on wearing face masks in public. Last week, Texas governor Greg Abbott rejected a request from mayors to require masks in their cities.
Steve Adler, mayor of Austin, criticized the decision, telling CNN he “wish[ed’ Abbott] had [reopened] a little slowly. By making it so that cites couldn’t enforce masks, it sent the message to our community that maybe this thing was over.”
California governor Gavin Newsom has announced that all residents will be required to wear masks. Cases are spiking there, with hospitalizations at the highest rate since the beginning of the pandemic. The state will continue its timeline for reopening.
According to CNN, the CDC will revise its mask-wearing recommendations after studying how masks are “good for source control and keeping you from giving it to others”, as well as “protect[ing] you from getting it yourself.”
Half of US states see coronavirus spike as officials warn first wave far from over | World news | The Guardian
Posted by John H Armwood II at 3:50 PM