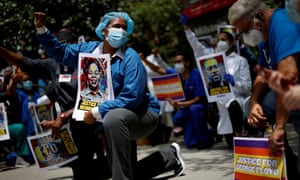 "Long before a white police officer killed George Floyd and sparked nationwide outrage, long before Covid-19 began killing Black people at twice the rate of their white counterparts, doctors and health experts were raising alarms that systematic racism is itself a pervasive, deadly pandemic – one that kills both instantaneously and insidiously, burdens Black and Brown Americans with generational trauma, contributes to higher rates of infant mortality and heart disease, and even speeds up the aging process.
Now, amid a national reckoning with entrenched inequality, lawmakers are finally hearing those alarms – and officially declaring racism a public health emergency. The city councils of Cleveland, Denver and Indianapolis have voted to acknowledge a crisis. Officials in San Bernardino county, California, and Montgomery county, Maryland, have done the same. State representatives in Ohio and Michigan are looking to follow suit.
These declarations are “long overdue”, said Dr Allison Agwu, an infectious disease specialist and associate professor at Johns Hopkins School of Medicine. As a physician on the frontlines of the coronavirus pandemic, Agwu said she’s been amazed at how quickly the medical establishment mobilized to develop diagnostic tests, and produce thousands of research papers seeking a treatment and vaccine. If the government can commit the same sorts of resources and funds to addressing issues of systemic racism, Agwu said, “That’s a start.”
The stark health disparities in the cities and counties that have declared emergencies have been clear for decades. In Cleveland, the city where a white officer shot and killed with impunity 12-year-old Tamir Rice, Black infants are nearly three times as likely to die as white infants. Maternal mortality rates for Black women are two to three times greater compared to white women, and neighborhoods where the majority of residents are Black have the highest rates of lead poisoning.
“Even as an elected official, when I’m driving, when the police drive up behind me – I feel a sense of nervousness that comes over me, “ said Basheer Jones, a Cleveland council member who introduced legislation declaring racism a health crisis. “The trauma of seeing your children, your sons, your daughters, your wives being killed, in living color – that kind of stress ... also plays a part in the ailments that affect our bodies.”

In Cleveland, officials introduced the landmark resolution recognizing racism as a health emergency in early March, before the coronavirus pandemic had hit the city, and months before the demonstrators against police brutality took to the streets nationwide. The moment has lent momentum to the effort, Jones said. “Getting support for this sort of legislation isn’t easy ... Now, everybody is on board.”
The language of these resolutions adopted by different cities and counties has varied, but all of them are largely symbolic. They assign new urgency to long-standing issues. “If you declare something an emergency, you’re also saying it’s imperative to address the problem,” Agwu said.
In San Bernardino, pastor Samuel Casey, one of the community leaders and activists who pushed the county to declare a crisis, said the move is an important first step. “I fought for this because I was just sick and tired of being sick and tired,” he said. “In some of our neighborhoods, kids are birthed into the generational trauma of slavery, and they’re traumatized by systemic oppression.” By focusing on health, activists were able to capture all the racist institutional and social structures that erode the wellbeing of Black and Brown people, Casey explained.
Decades of research back up their case. Police have fatally shot about 1,000 people a year in recent years, disproportionately killing Black people, as documented by the Guardian’s Counted project. The criminal justice system disproportionately jails African Americans and Latino people. Housing segregation and racist housing policies have limited access to education and healthcare, and left minorities disproportionately exposed to toxic and cancer-causing chemicals in the water they drink, the air they breathe.
Amid the pandemic, a labor market structured by racism means that Black and Latino people working frontline jobs as nurses, grocery staff, cleaners and transit workers are disproportionately exposed to the coronavirus. “I’ve taken care of a number of coronavirus patients, and I’ve had frank discussions with my Black patients about their risks,” said Dr Jade Pagkas-Bather, an infectious disease specialist at the University of Chicago Medicine. “And as a Black provider, I offer that perspective in a way that doesn’t feel as painful or threatening.” But pervasive discrimination within the medical system also contributes to bad health outcomes, she noted. “Black people aren’t believed when they’re in pain,” she said.

Discrimination as a chronic illness

Mary Bassett, the director of the FXB Center for Health and Human Rights at Harvard, who previously served as a New York City health commissioner, said race can also gradually erode physical wellbeing in less obvious ways. A growing body of research has found links between the chronic stress of experiencing discrimination and health disorders; for instance, people who endure years of microaggressions develop heart disease more rapidly. A study of Black women found that stress from frequent racist encounters was associated with chronic low-grade inflammation. Other research suggests that pregnant women who report high levels of discrimination tend give birth to babies that have a lower birth weight.
Some researchers have also linked the constant stress of being marginalized to a phenomenon called “weathering” – which accelerates aging on a genetic level. “Of course, the answer to all this is not sending everyone on a yoga retreat – though that wouldn’t be so bad. We still need to address the structural issues,” Bassett said. Doing so will likely involve a range of reforms across many different departments of local governments, she told the Guardian.
To that end, Somerville, Massachusetts – along with declaring a public safety and health emergency – announced it would withdraw from a federal defense department program that provides military weapons to police departments and committed to implementing a 10-point plan to reform law enforcement developed by US representative Ayanna Pressley, a Democrat of Massachusetts. Cleveland lawmakers are planning to create a community advisory board to help shape legislation to address health disparities.
In San Bernardino, community activists plan to keep the pressure on officials to go beyond a ceremonial declaration, by addressing not only the criminal justice and policing system that doles out “instant death” for Black men, Casey said, but also inequities in the education and medical system.
“Racism is a pandemic just like Covid-19 is a pandemic,” Casey said. “But we’ve been dealing with the coronavirus for, what, four months? We’ve had systematic oppression for 400 plus years.”
‘Long overdue’: lawmakers declare racism a public health emergency | Society | The Guardian
Posted by John H Armwood II at 8:21 AM