The Guardian view on Trump and the ICC: an attack on human rights | Editorial | Opinion | The Guardian 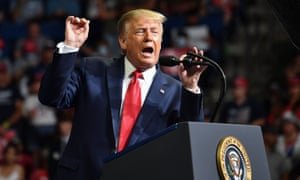 "The assault that the US has launched on the international criminal court is not merely an attack on a valuable and necessary institution. It is an attack on human rights themselves, and on the victims who have endured horrific abuses.
The Trump administration is imposing sanctions not on those who commit atrocities, but on those who investigate such crimes. The decision to target members of the international body charged with prosecuting individuals for war crimes, crimes against humanity and genocide is motivated primarily by the ICC’s investigation into abuses by multiple actors, including the US, in the war in Afghanistan.
“We’re also gravely concerned about the threat the court poses to Israel,” the US secretary of state, Mike Pompeo, said. The court’s judges are due to rule on whether it has jurisdiction in the occupied territories after Fatou Bensouda, the chief prosecutor of the ICC, said that her preliminary investigation into actions by Israeli forces and Palestinian armed groups had satisfied her that war crimes “have been or are being committed”.
The executive order, which Donald Trump signed this month, authorises the freezing of assets and visa bans against court officials, their family members and those who help them. The vagueness of its language and the vindictiveness of this administration suggest it is intended to chill cooperation. It could be used to freeze the assets of a researcher at a human rights group whose work is then used by the court. The administration’s bad faith is underlined by its smearing of the court with accusations of corruption.
The ICC draws its legitimacy from the broad support for its establishment, with 123 member states. The US signed the Rome Statute, which created the body, but never ratified it precisely because of the prospect of US citizens being charged. The Obama administration did at least assist ICC investigations. But US ambivalence towards the court took a sharp turn once Mr Trump was elected: unsurprising, given his hostility to multilateral institutions and indifference to human rights. (The new book by the former national security adviser John Bolton alleges that Mr Trump told China’s president, Xi Jinping, that building mass detention camps for Uighurs in Xinjiang was “exactly the right thing to do”.)
The US had tried to bully the court into ending the Afghanistan inquiry, revoking Ms Bensouda’s visa last year. Despite that, judges authorised a full investigation in March – the first time the ICC has given the go-ahead to investigating US forces. It has jurisdiction because Afghanistan is a member state, even though the US isn’t. US citizens who commit crimes in other countries are subject to the jurisdiction of foreign courts. There is no reason that they should not be subject to the ICC, a court of last resort.
The US decision is unlikely to end the Afghanistan investigation, although it will hinder it: it was always going to be a long, slow process, given that the Afghan government is also opposed to it. But the order will weaken the court’s standing, and could encourage others to withdraw, as the Philippines did last year. Countries facing investigations have claimed it is a place where developing world leaders may be held to account while others remain untouchable.
The European Union has called the sanctions unacceptable and urged the US to reconsider. Others should follow suit. Mr Trump will not overturn his order, but how aggressively it is implemented remains to be seen. Substantive support – such as assistance with legal fees for those targeted – will also be needed. The ICC is facing perhaps the biggest challenge of its almost two-decade existence. But in the end, though Mr Trump and his administration will not see it, this attack may be more damaging to America’s reputation and authority than it will be to the court’s."
The Guardian view on Trump and the ICC: an attack on human rights | Editorial | Opinion | The Guardian
Posted by John H Armwood II at 2:01 PM