Daughter speaks out after her father dies of Covid-19: 'It was preventable' | World news | The Guardian 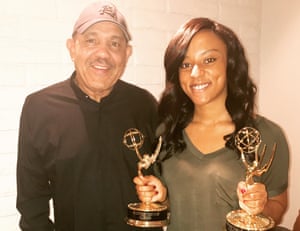 "As her father lay dying in a hospital bed in Arizona, after testing positive for Covid-19, Lina Washington pleaded with him to keep fighting.


When they hung up, Washington scrolled through Instagram. She saw stories of friends and former classmates drinking and socializing at crowded bars and clubs, even as coronavirus infections rose exponentially across the state. Yet there they were, smiling, maskless, as if the threat had disappeared and life returned to normal.
Would they be so reckless, she wondered, if they knew that just a few miles away doctors and nurses were toiling around the clock to save her father’s life?
“People don’t think that it can happen to them,” Washington, a high school friend and classmate, told me during a phone interview this week. “And that carelessness, that hubris, that arrogance may have cost my dad his life.”
Robert Edward Washington Jr died on 11 June from complications related to the virus, less than a month after returning to work as a security guard at a tribal casino in Chandler.
In the days since his death, Washington said, she has been on a “warpath”, demanding accountability and leadership from public officials and business leaders. She has directly challenged Arizona governor Doug Ducey over his response to the pandemic and implored him to do more to protect vulnerable residents.
“His death was preventable,” she said. “I’m just speaking out to ensure nobody else has to feel this pain.”
In the last few days, as new coronavirus cases in Arizona have climbed to their highest levels of the pandemic, Washington has amplified her calls for stricter safety precautions. She is a television sports reporter in Sacramento, California, but she grew up in the Phoenix area. She has given interviews to every local TV news station and has spoken to the Arizona Republic. Nationally, she has been featured on ABC and MSNBC.
Some of her sharpest criticism has been expressed on Twitter.
“I know my AZ friends aren’t taking this seriously,” Washington tweeted on Thursday. “I see what Old Town & Mill Ave look like every weekend on IG & it’s obscene. You’re putting people like my dad at risk by not wearing a mask at the very least. A Covid-19 death happened to me & could happen to you. Wake up.”
On Friday, Washington filmed herself walking inside a Walmart in Tempe, after she saw multiple customers shopping without masks.
“If you get sick, you get sick,” a customer told her, which she shared in a tweet. She proceeded to call out Governor Ducey, writing: “WHERE IS THE ACCOUNTABILITY?!”
Two days earlier, Ducey had said he would no longer prohibit local governments from requiring masks, a reversal amid mounting pressure from mayors and public health officials. Wearing a mask for the first time at a news briefing, Ducey conceded that the virus was “widespread in the state” and urged Arizonans to “act responsibly to protect one another”.
Gila River Hotels & Casinos, which operates Lone Butte, where Washington’s father worked, posted a statement on Twitter to announce it was closing for two weeks, as the Gila River Indian Community moved to make protective face coverings mandatory on community lands.
“This move comes after the death of one of your employees, my dad, who returned to work on 15 May,” Washington responded. It was the same day Arizona lifted it’s stay-at-home order.
“We’re open, Phoenix!” the casino tweeted that morning, encouraging guests to come and “reclaim your fun”.

It’s Arizona, we don’t really care about one another

Washington said she begged her father to stay home. But he was stubborn, a trait she says she inherited. He told her he needed to work, to ensure he had health and life insurance.
That night, he worked at the security desk, Washington said, exposing him to nearly every customer. Many employees were required to wear protective gear. Guests of the casino were encouraged to wear masks but not required to do so.
Washington said her father called her the next day and told her “80% of the people waiting to get into the casino at 4.30 in the morning weren’t wearing masks.”
“Within 10 days of him returning back to work he had tested positive for Covid and two weeks after that he was dead,” she said.
“I really wonder how many people were in that line that I knew, that we probably went to school with,” she said, adding: “I know so many people who would do that. Because it’s Arizona, and we don’t really care about one another in ways like other communities do. Especially people who look like me and my dad.”
Washington’s father’s death came amid a national reckoning over racism in America that has affected Washington professionally and personally. Inspired by the Black Lives Matter demonstrations, she helped start a community art project to benefit black youth organizations in Sacramento. It was just getting off the ground when she learned her father was ill.
“It was a perfect storm, a black woman, in news, with a dad in the hospital with coronavirus,” she said. “It just all came down at once – and then my worst fears were realized.”
Washington said she was reluctant at first to speak out. As a sports reporter, she would rather be talking about the Sacramento Kings’ NBA season than her father’s death. But she said she felt a responsibility to use her platform to raise awareness.
“I’m just grateful that me expressing my pain is making a difference and putting a face to Covid in Arizona,” she said.
Robert Washington was 68. He was a diabetic and had overcome prostate cancer. Black Americans infected with the virus are 2.3 times more likely to die from it than white Americans.
The last time Washington saw her father in person was in March. During a visit to Arizona, she asked him to sit for an interview.
Filmed in his backyard, Robert Washington recalled his adolescence in Ohio. A talented athlete, he excelled in nearly every sport he played. Football earned him a full scholarship to the University of Notre Dame in the early 1970s.
He was a devoted father who took her to dance, taught her to drive and prepared her for the challenges of being a black woman in an industry dominated by white men. He would take her to work at his shoeshine stand at America West Arena, so she could watch the Phoenix Suns play.
“He was my best friend,” she said, her voice breaking. “I wish I could call him right now.”
Washington will lay her father to rest on Sunday, Father’s Day."
Daughter speaks out after her father dies of Covid-19: 'It was preventable' | World news | The Guardian
Posted by John H Armwood II at 1:58 PM