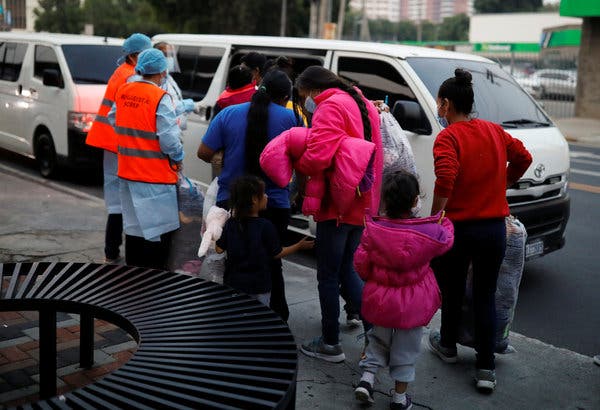 The Trump administration is flouting the law to turn away minors in desperate need of protection.

Ms. Woltjen is the executive director and founder of the Young Center for Immigrant Children’s Rights.

The Supreme Court decision last week protecting the DACA program was reason for celebration, but the Trump administration’s assault on immigration isn’t over. President Trump has already said he plans to keep pushing to end DACA. But more immediately, under the guise of the pandemic, the Trump administration is turning back unaccompanied children at the border in violation of federal law.

In October 2017 the White House issued a wish list of immigration policies it wanted to carry out. First on the list was building the border wall. No. 2 was deporting children who were traveling on their own. That is quietly happening right now, with public health as the excuse.

Last week, the Centers for Disease Control indefinitely extended an order barring the entry of migrants seeking protection at land borders, including children. This order, first issued in March, flouts the federal anti-trafficking law that requires the government to place unaccompanied children into protective custody and allow them to go before an asylum officer or judge.

So far, Border Patrol agents, who have not been trained on how to ask for or evaluate testimony, have turned back more than 2,000 children, either sending them back over the bridge to Mexico, or putting them on Immigration and Customs Enforcement flights back to their home country.

Children, many of them younger than 13, come to the United States from all over the world seeking safety. Our anti-trafficking law requires that, once the Border Patrol apprehends a child, they must be transferred to the care and custody of the Office of Refugee Resettlement, and placed in a shelter where they can recover enough to tell their story, have the opportunity to ask for protection, and be placed with family members in the United States while they go through immigration proceedings.

Our government is returning children targeted by gangs right back to their tormentors, abused children to their abusers. I’ve worked with unaccompanied children for 16 years. It takes time to unravel these children’s stories, to figure out what, if anything they have to return to.

Once, my group was assigned to work with a 16-year-old girl from Haiti who was pregnant. One of our French-speaking volunteers met with her for months before she felt comfortable enough to share her story about walking home from school one day and being grabbed and blindfolded by a gang of men who raped her. She became pregnant as a result and felt so ashamed that it took her months to talk about it with her volunteer advocate.

In another case, a teenage boy from Guatemala, who spoke an indigenous language and understood very little Spanish, was brought to the United States by a coyote. He was placed in protective custody and was assigned a child advocate.

It took nearly a year for the advocate to determine that he had been forced to work in cornfields for six days a week, from sunup to sundown. He wasn’t allowed to attend school. His advocate made the case that it was not in his best interests to be sent back. He was granted asylum and is now enrolled in community college.

So You Want to Learn About Juneteenth?

How Humanity Unleashed a Flood of New Diseases

Another priority on the administration’s 2017 wish list was to get rid of the Flores settlement agreement, a 1997 consent decree that prevents the Department of Homeland Security from holding children in family detention for more than 20 days. While the Trump administration has tried to get around the Flores agreement, the federal courts have thwarted those efforts.

But top agency officials have reinstated a plan called “binary choice.” Homeland Security told parents in family detention that if they’re worried about the coronavirus, they could sign paperwork to get their children released. Parents face the torturous “choice” of keeping their children indefinitely detained in conditions that one federal court has described as “hotbeds for contagion” or being separated from them. It’s family separation redux.

During the pandemic, we’ve all been required to accept significant limits on our day-to-day life to protect ourselves, to protect our communities. But that’s not a reason to turn away children, especially children desperately in need of protection.

As was recently pointed out by public health experts, there are steps we can take to reduce the health risks for immigrant children who arrive at the border on their own, while protecting Americans. Shelters run by the Department of Health and Human Services’ Office of Refugee Resettlement are nearly empty — there is plenty of room to quarantine children for 14 days.

The child welfare laws of all 50 states require that before a child is placed with family, or sent across state lines, a judge must consider whether the child will be safe. That requirement doesn’t disappear because there’s a pandemic. Unaccompanied immigrant children deserve no less — we have an obligation, under federal and international law, to learn their stories and make sure the next place they land they’ll be safe."