Calls for reparations are growing louder. How is the US responding? | World news | The Guardian 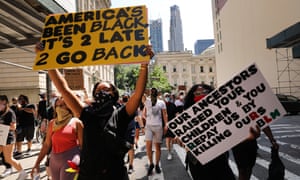 "As the American civil war reached its bloody end in 1865, the Union general William Sherman seized land from Confederates and mandated it be redistributed, in 40-acre plots, to slaves newly freed from bondage.

The promise of “40 acres and a mule” was never fulfilled. But a debate has raged ever since about what America owes to the descendants of slaves, and to the victims of domestic terror and state-sanctioned discrimination that persisted long after emancipation?

“We helped build this nation. We built the United States Capitol. We built the White House. We made cotton king and that built the early economy of the United States,” Texas congresswoman Sheila Jackson Lee, the sponsor of a House resolution to study reparations, said in an interview this week. “We were never paid, never given insurance, never received compensation for the more than 200 years of living and working in bondage. And we continue to live with the stain of slavery today.”

In the weeks after George Floyd died pleading for his life under the knee of a Minneapolis police officer, an embodiment of the violent oppression black Americans have endured for centuries, supporters of reparations for slavery are newly hopeful that the politics are beginning to change.

The compounding national crises – a pandemic, an economic collapse and widespread protests over police brutality, all of which have taken an unequal toll on African Americans – are helping to make the case for reparations, she said.

Once a lonely cause championed by black leaders and lawmakers, the debate over reparations has moved in recent years to the center of mainstream political debate.

Several states, localities and private institutions are beginning to grapple with issue, convening commissions and task forces develop proposals for reparations. Progressive candidates running for Congress from New York to Colorado to Texas have declared their support for reparations. And earlier this month, at an AME church in Delaware, Joe Biden, the presumptive Democratic presidential nominee, listened as the state senator Darius Brown challenged him on the issue.

“It shouldn’t be a study of reparations,” Brown said. “It should be funding reparations.”

But for scholars and advocates who have been making the case for reparations for decades, Biden’s support for studying the issue represents a dramatic break from the past.

John Conyers, who died in 2019 and was the longest-serving African American in Congress, first introduced a bill to study reparations for slavery in 1989. The Michigan Democrat re-introduced it every cycle for nearly three decades, until he resigned in 2017. Even Barack Obama, when asked by the author, Ta-Nehisi Coates, whose influential 2014 essay in the Atlantic reintroduced the subject, said he was opposed, arguing that reparations was politically impractical.

On Juneteenth last year, a Congressional subcommittee held a first-of-its-kind hearing on the legislation, which would develop a commission to study the long-lasting effects of slavery across generations and consider a “national apology” for the harm it has caused.

The notion of compensating descendants of American slaves is not widely popular. But there are signs that is shifting.

According to a Gallup Poll conducted in 2002, 81% of Americans opposed reparations, compared with just 14% who supported the idea. In 2019, Gallup found that 29% of Americans agreed the government should recompense descendants of the enslaved, with support rising among white Americans from 6% to 16%. The most dramatic increase was among black Americans, whose support climbed from a simple majority in 2002 to nearly three-quarters in 2019.

At the same time, young Americans are significantly more likely to agree that the legacy of slavery still impacts black Americans today, while also being more likely to say the US government should formally apologize for slavery and pay reparations, according to an AP-NORC poll published in September.

And supporters are hopeful those numbers will rise amid a national reckoning over racism and discrimination. Public opinion on race has shifted dramatically in the span of a few weeks, with a majority of Americans now in agreement that racial discrimination is “big problem” in the United States.

In California, assemblywoman Shirley Weber said the protests fueled interest in her bill to study reparations in the state, which the chamber approved overwhelmingly last week.

“Something dramatic is going on,” said Weber, who is the daughter of sharecroppers and a scholar of African American studies. “Folks now begin to realize just how extensively, how deeply, issues of race are embedded in our society and how that can produce what we saw happen to George Floyd in Minneapolis.”

But conservatives and some prominent black leaders have dismissed the idea as impractical and unnecessarily divisive at a time when building national unity is paramount.

Coleman Hughes, a fellow at the free market thinktank Manhattan Institute, worries a renewed focus on reparations was a “distraction” from the more pressing issues, like police brutality and mass incarceration, that has devastated America’s black communities.

Yet compensation for historical injustices are not without precedent in America.

After the second world war, Congress created a commission to compensate Native American tribes for land seized by the US government, though many now say the approach was paternalistic. Decades later, Ronald Reagan signed legislation that authorized individual payments of $20,000 to Japanese-Americans who were interned in the United States during the second world war, and extended a formal apology from the US government.

The House passed a resolution acknowledging and apologizing for slavery in 2008. The Senate approved a similar resolution a year later, but a disclaimer was appended to ensure the apology could not be used as a legal rationale for reparations.

Facing history is a necessary part of the healing process for nations cleaved by atrocity said Susan Neiman, an Atlanta-born academic based in Berlin and the author of Learning from the Germans.

She said it took time for Germany to confront the horrors of nazism and the Holocaust, Neiman said, and the process faced strong resistance. Since 1952, Germany has paid reparations, mostly to Jewish victims of the Nazi regime.

“It needs to be a multi-layered process, one involving schools, the arts, rethinking what values we want to honor in public space, and all manner of legal measures from reparations to ending police brutality,” she said. “Ideally, a broad democratic discussion must accompany such a process, and once it’s done, countries are actually better off for it.”

A commission to study reparations as proposed by Congress would have to grapple with profound moral and ethical questions as well as profane matters of money and politics. Proposals vary widely, as do the cost estimates and suggested criteria for eligibility. But at their core is an attempt to make economic amends for historic wrongs.

Another sign the issue is gaining political traction is that the debate over reparations has expanded to include discussions over feasibility and mechanics, said William Darity, an economist at Duke University and the author of From Here to Equality: Reparations for Black Americans in the Twenty-First Century.

In his research, Darity has argued that the “most powerful indicator” of the cumulative costs of racial injustice in America is the wealth disparities between white and black Americans. The objective of a reparations package, he believes, should be to close that gap.

The data paint a stark picture. Black Americans hold one-tenth of the wealth of white Americans. Just 41% of black families own their homes compared with more than 70% of white families. And black college graduates have a lower homeownership rate than white high school dropouts.

Others have proposed disbursing the money in the form of educational vouchers or health insurance or making long-term investments in programs that address disparities in education, housing and employment.

As for objections to the cost, he points to the $2tn economic relief package quickly passed by Congress to stem the fallout from the coronavirus pandemic, which included direct payments to Americans.

The cruelty of the Covid-19 outbreak, the economic crisis, and police brutality on black Americans must be understood as part of “a continuum that began with the Middle Passage”, said California congresswoman Barbara Lee, author of a new bill to establish a Truth, Racial Healing and Transformation Commission.

“This is truth-telling time,” she said. “We have to, as I say, break these chains once and for all.”

Calls for reparations are growing louder. How is the US responding? | World news | The Guardian
Posted by John H Armwood II at 1:09 PM