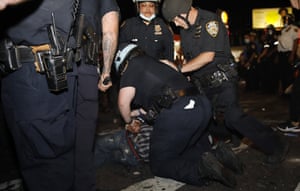 "Protesters in New York have been unnecessarily arrested and detained for as long as 48 hours in “abysmal” conditions without access to masks, food and water, according to legal experts.

Since the police killing of George Floyd in Minneapolis just over two weeks ago, tens of thousands of people have taken to the streets of New York City in protest over police brutality.

More than 2,000 people had been arrested in the city as of Thursday – around a fifth of the total of over 10,000 arrested nationally – on charges such as resisting arrest, disorderly conduct and violating the now cancelled city-wide curfew. New York Police Department (NYPD) declined a request for updated arrest figures, saying they will be available “in the near future”.

Lawyers say the NYPD is also denying many of those arrested their right to a phone call, leaving their friends and families fearful for their lives. Details of arrests are not publicly available, but anecdotally, lawyers said protesters are facing charges for disorderly conduct, obstructing governmental administration and for violating the curfew, which was considered a Class B misdemeanour, carrying a maximum sentence of up to three months imprisonment.

Despite the coronavirus pandemic, they said most police officers do not wear masks and in some cases confiscate those of protesters who are being “packed” into cells with no regard for social distancing.

Corey Stoughton, head of the special litigation unit at the Legal Aid Society, said: “We have heard from our clients who have been arrested that the conditions in the holding cells that they are held in, in many cases for 10-20 hours, are abysmal. Especially following some of the larger demonstrations and mass arrests, that there are extremely crowded conditions, that the cells are dirty and unsanitary and unsafe.”

Police officers, she added, “rarely” wear masks. “So really an arrest is a decision by the police department to put protesters into a situation that is dangerous for their health and safety.”

Most protesters that are arrested are taken to a police station and held before being released on a summons ordering them to appear in court at a later date. The protesters the Guardian spoke to had received summonses for September. If they face higher charges, they are arraigned, which means they are detained until they have seen a judge – who either sets bail or releases them.

Rigodis Appling, a staff attorney at the Legal Aid Society, where she is a founding member of the Black Attorneys of Legal Aid caucus, said some protesters were held for 48 hours. Ordinarily this would be illegal under New York state’s 24-hour arrest-to-arraignment rule but it was suspended as a result of the crisis and upheld by a Manhattan supreme court judge.

“The people I saw had been sitting in the Tombs [the nickname for where people are detained underneath the courthouse in Manhattan] for 48 hours … in New York, typically you’re supposed to see a judge within 24 hours,” said Appling. She said of those who were arraigned, were “majority, almost all, black and Latino” and that many were “over-charged” with higher crimes. She has also seen multiple essential workers who were not necessarily a part of the protests in arraignments.

Describing the conditions in the Tombs, she said: “Filthy would be an understatement.” While she said it is always like that, Covid-19 makes it “even scarier” for her clients.

Porsha-Shaf’on Venable, a supervising attorney public defender in New York and an attorney for Good Call, a hotline offering 24-hour free legal support to people who have been arrested in the city and their friends and family, said police treatment of protesters is tantamount to an “act of terror”.

She added: “People are scared … And if there was any confidence, if there was any modicum of confidence in the NYPD before, they have successfully diminished that. It is gone. And you can hear it in every mother’s voice that calls the hotline.”

Good Call has been flooded with close to 2,000 calls since the protests started and expanded its team of lawyers, who Venable said are working “around the clock”.

On Thursday night, when protesters in the Bronx were zip-tied, she said they were taken to another borough, Queens.

“Some of them were ultimately released, but it was still during curfew time with no way to get back home and with real fear of being arrested again for violating the curfew.”

Many of the arrests are unnecessary, said Jared Trujillo, defence attorney and president of the association of Legal Aid Attorneys.

“Ultimately someone who’s just out there protesting there is no reason that police officers can’t issue an appearance ticket – if they have to arrest them at all.”

Rather than scaring off protesters, police treatment of those arrested is in some ways “emboldening” people to demonstrate, he said.

The Manhattan district attorney, Cyrus Vance, announced on Friday that he will not prosecute protesters for low-level offenses.

However, Trujillo said there was no guarantee. “Something to note about the Manhattan DA is oftentimes they say they’re not going to prosecute certain things and they do it anyway.”

Student Kellen Gold, 22, was arrested for violating the curfew on Wednesday night at a march in Manhattan. Gold, who uses they/them pronouns, said they were charged by police on bikes so they ran and kneeled before being “thrown to the ground and then cuffed” and taken to a police station in Brooklyn.

“I’ve been arrested a bunch of times [for activism] … this is the first arrest where I’ve been violently handled,” said Gold, who was released at around 1.15am and given a court date in September.

Almost all of the officers were not wearing masks, said Gold, and protesters were required to share water cups.

Johnathan, 35, a videographer from Brooklyn who did not want to give his last name, said he was arrested for trespassing at the Barclays Centre on 29 May after walking up the sloping grass-covered roof of the train station to get a better vantage point to film.

At One Police Plaza, NYPD’s headquarters in Manhattan, he claims it was “chaos”. He said he was not given a phone call and officers were not wearing masks or social distancing. In a holding area of about 50 people, he said he was the only one wearing a mask.

He said he has been summoned to appear in September but that officers told him they will not charge him with trespassing. “I don’t know what’s in store,” he added.

The experience has changed him, he said, and he believes the police should be defunded. He added: “If they’re messing that up, what else are they messing up? … The fire that has now been lit under me is to hold the police accountable.”

The NYPD, which Mayor Bill de Blasio announced on Sunday would have its $6bn budget cut following pressure from protesters, said it “supports and respects the rights of protesters to express their views” and that they are given “numerous warnings to disperse” if officers decide to clear the street. It said if directions are ignored, “a person may be subject to an arrest or summons.”

Sergeant Mary Frances O’Donnell, a spokeswoman for the deputy commissioner, public information, said: “While the majority of the protests have been peaceful, our officers have encountered agitators with different agendas who have used the guise of the protests to commit criminal acts and violence.

“Since May 25, our officers have been shot at, stabbed, assaulted with rocks, bricks and other debris, have been struck by vehicles and have even had molotov cocktails thrown inside their vehicle. This behaviour is unacceptable and will not be tolerated.”