Rashida Tlaib on Trump v the Squad: 'He's scared of us' | US news | The Guardian 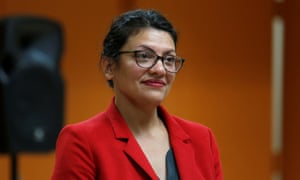 "In the days after Donald Trump derailed Rashida Tlaib’s plans to visit Israel and the Palestinian territories, the president tauntedand repeatedly attacked the Michigan Democrat, calling her obnoxious, violent and crazy.


After Tlaib wept during a press conference, Trump tweeted that he did not “buy her tears”. He then accused Tlaib of antisemitism, even as he used antisemitic tropes himself.
These were of course only the latest salvos in an ongoing battlebetween Trump and Tlaib, Ilhan Omar, Alexandria Ocasio-Cortez and Ayanna Pressley, the four progressive Democrats who together make up “the Squad”.
In her first in-depth interview since her planned visit with Omar to the Palestinian territories was cancelled, Tlaib said Trump was attacking women of color for a reason.
“It’s been very clear to me, especially this last week, that he’s scared of us,” Tlaib said. “He’s afraid of women of color … because we’re not afraid of him and we’re not afraid to speak up and say that we have a white supremacist in the White House who has a hate agenda.
“He’s afraid because we have a real agenda for the American people.”
Trump appears increasingly eager to present Tlaib’s allies – all in their first term in the House – as Democrat party leaders.
“She and her [three] friends are the new face of the Democrat [sic] party,” Trump tweeted on Tuesday. “Live with it!”
Though establishment Democrats fear that perception taking hold among the electorate and some political commentators say it is a shrewd move from the president, Tlaib disagrees.
Many of the progressive ideas she and her allies are pushing – eliminating student debt, Medicare for All, taxing the rich, strengthening civil rights, ending corporate control of government – are, she said, popular not just with Democrats but with independents and some Republicans, too.
“He can bring it,” she said, “because we actually have policies that came from the people. What he’s doing by choosing us four as his target is trying to distract folks from the fact that more people are living in poverty than ever, because he has failed as a president.”
While her willingness to stand up to the president and her position on Palestinian issues ensures national attention, Tlaib insisted she was not solely focused on battling Trump. Instead, she said, she is determined to address problems in Michigan’s 13th district, the nation’s third poorest, covering Detroit and some lower-income suburbs.
After taking office, Tlaib developed a broad set of anti-poverty programs while building four constituent services offices, separate from campaign operations. Staff help low-income residents avert water shutoffs, access tax credits and find free legal services. They also help connect seniors with food assistance, among other services.
Tlaib said she was protecting her district from the Koch brothers’ toxic petroleum coke piles along the Detroit river, and noted that she was involved in efforts to take on Marathon, a major polluter in south-west Detroit.
Tlaib has introduced 11 bills with a focus on systemic poverty. Detroit’s auto insurance rates are the nation’s highest; two bills would help lower them by stopping “redlining”, a controversial practice of charging far more to those who are Detroit residents, or widows, or single, as well as those with low credit scores and lower education levels, among other factors not related to driving.
Another bill would limit facial recognition technology used by Detroit police, which activists say misidentifies black people at a high rate. Tlaib is also planning to introduce the Justice for All Civil Rights Act, which would lower the legal threshold for proving that a policy, law or practice is discriminatory. She points to auto insurance redlining, education and banks’ minority lending practices as areas of concern.
Such ideas appear to make Tlaib popular in her district, where recent polling put her favorability rating at 76%. She said constituents recognize that she doesn’t “sell out”.
“They’re done with the corporate assault on working families,” she said. “Health insurance, auto insurance, banks that don’t lend to our families, surveillance – so much of it is tied to corporate greed.”

Still, it is occasionally alleged that she ignores her district. Tlaib said many of her critics are establishment types and asked why she hasn’t heard them speaking up about “injustices in Detroit”.
“It’s been silence, crickets,” she said. “People will target me, but my work, my vote says the complete opposite of what the say.”
The pro-Israel lobby and some conservative Michigan Jews who do not live in Tlaib’s district plan to meddle in her 2020 re-election campaign. They see her as vulnerable because she represents a majority black district and edged a black candidate by 900 votes in the 2018 primary. The pro-Israel lobby plans to back a black challenger.
However, polling puts Tlaib up 56%-19% in a hypothetical match up against her most likely opponent, Brenda Jones, the black Detroit city council president. Furthermore, Detroit Jewish groups had Tlaib’s back during the controversy over her planned visit to the Palestinian territories. She said she had always maintained a strong relationship with Jewish lawmakers and leaders.
Tlaib probably first got Trump’s attention after winning her election and declaring it time to “impeach the motherfucker”. Though 2020 is quickly approaching and it appears some Democrat leaders are trying to wind down the clock on an impeachment attempt, Tlaib said House Democrats have an obligation to “hold the corrupt president accountable”. Trump still hasn’t divested from his businesses and continues using the White House to profit, she said.
“Why not pass it, send it to the Senate and let them deal with the millions of Americans who are on our door saying ‘Do something’,” she said, noting that more than half of Democrats in the House now support impeachment and their numbers keep growing.
Either way, she said she was confident Trump’s time in office was limited, and added that he does not seem to realize the Squad is much larger than the four women in Washington. It’s also all the women in the freshman class who come from diverse backgrounds, she said, and have overcome challenges, and are up in front of Congress asking “Why?” It’s that Squad and the American people who are standing up to Trump, Tlaib said.
“I really believe that when we work together, we can defeat this type of hate and the attacks on our families – not just racism, but systemic oppression,” she said. “All of that can be knocked down if we come together, because there’s more of us than them.”