Opinion | Japan, South Korea and a Rupture on the Pacific Rim - The New York Times 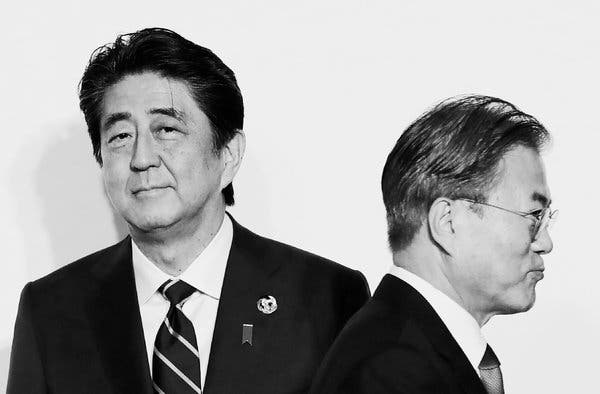 "The United States could help resolve the rift between two critical allies. But it has shown little interest.


The editorial board represents the opinions of the board, its editor and the publisher. It is separate from the newsroom and the Op-Ed section.
Prime Minister Shinzo Abe of Japan, left, and President Moon Jae-in of South Korea at the G-20 summit in Osaka, Japan, in June.
Prime Minister Shinzo Abe of Japan, left, and President Moon Jae-in of South Korea at the G-20 summit in Osaka, Japan, in June.
A fast-escalating trade war between South Korea and Japan took a dangerous turn this week when the Koreans abandoned a military intelligence-sharing agreement with the Japanese, weakening an important source of information on North Korea and China. South Korea said it was responding to Japan’s restrictions on trade with South Korea, including on the export of specialized chemicals needed to make components for electronic devices. Japan described the move as a tightening of controls over critical materials, but it went far beyond that.
The rupture has little to do with national security, important materials, mismanagement or any of the other proffered rationales. It’s all about age-old animosities, and they’ve been allowed to putrefy in large measure by President Trump’s irresponsible attitude toward trade and alliances.
This is a fight in which everyone stands to lose except China and North Korea, and the Trump administration should be heavily leaning on its closest Asian allies to come to their senses.
The roots of the animosity stretch to Japan’s colonization of Korea between 1910 and 1945, and more specifically the brutal exploitation of Koreans as sex slaves and forced laborers during World War II. Passions have flared regularly but have usually been tamped down through the alliance of the two democracies with the United States against threats posed by North Korea and China, and by the extensive trade between South Korea and Japan.
One facet of the animosity has been South Korea’s demand for compensation for South Korean survivors of forced labor. A trigger for the current flare-up were rulings by South Korean courts demanding monetary amends from major Japanese firms.
Attempts by South Koreans to collect that compensation prompted Japanese retaliation in the form of restrictions on the export to South Korea of three chemicals used to make semiconductors and flat screens. South Korea is one of the world’s biggest makers of the chips and Japan is a major supplier of the chemicals; Japan hinted that the Koreans were not properly handling the chemicals, which have military applications. Worse, on Aug. 2 Japan announced it was removing South Korea from a “white list” of trusted trade partners. South Koreans reacted with a furious anti-Japan campaign, including boycotts of Japanese goods. Then came the break in intelligence sharing.
All this is obviously damaging the economies and security of both countries, and to American interests in the region, which depend in large measure on healthy relationships with Japan and South Korea. Washington should have long ago stepped in to try to break up the fight, but the Trump administration has shown little interest.
Mr. Trump popularized using faux claims of “national security” to raise tariffs on allies and enemies alike, whether on cars from Europe, steel from Canada or anything from China, inviting other nations to similarly subvert the global trading system and World Trade Organization rules. The president has also demonstrated contempt for alliances — one of his first acts in office was to abandon the Trans-Pacific Partnership that President Barack Obama had supported. And he has played down the threat posed by recent North Korean missile tests so as not to diminish the glow of his meeting with Kim Jong-un, the North Korean despot.
Mr. Trump cannot be counted on to understand that the feud between two critical allies in a critical part of the world is bad for them and for the United States, and must stop. But Japan and South Korea should not need American help to see the folly of allowing the bad blood between them to damage their economies and security, and to aid their real foes."

Opinion | Japan, South Korea and a Rupture on the Pacific Rim - The New York Times
Posted by John H Armwood II at 10:19 AM