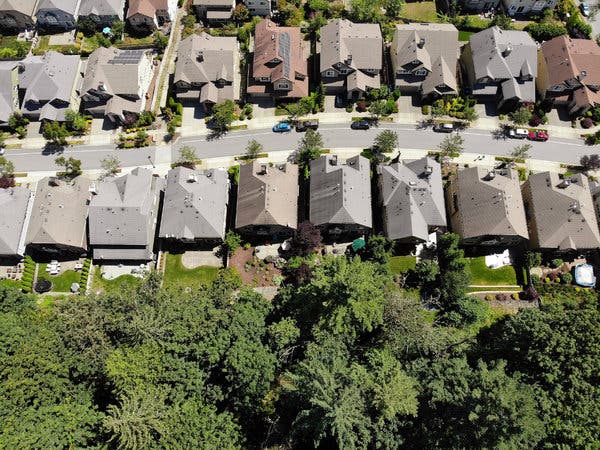 "This article is part of David Leonhardt’s newsletter. You can sign up here to receive it each weekday.

My colleague Binyamin Appelbaum recently went to a meeting of the Montgomery County Council in suburban Maryland. There, he watched well-off homeowners fight against a new ordinance to create additional housing. “You work hard, and you get to go live in Montgomery County,” one retired lawyer said. “Does that mean it has to be the first place you live? No. You can drive a little further and work your way up to it.”

The attitudes at that meeting were another example of Nimbyism — the “not in my backyard” phenomenon, in which people oppose development in their own communities, even when it would have big benefits. Nimbyism has also been an issue in San Francisco, New York, Boston and other metropolitan areas.

“Not-in-my-backyardism is a bipartisan sentiment,” The Times’s Farhad Manjoo has written, “but because the largest American cities are populated and run by Democrats — many in states under complete Democratic control — this sort of nakedly exclusionary urban restrictionism is a particular shame of the left.”

Another of my colleagues, Nick Kristof, recently published a column that made clear just how large the societal costs of Nimbyism are. It doesn’t only keep housing costs artificially high. It also prevents working-class families from moving into some of the very communities that could transform their lives.

As Nick describes, a new experiment in Seattle has shown a fascinating way to improve the nation’s housing policy. When the local government in Seattle created a (low-cost!) program to advise lower-income families about their options for using housing vouchers, more families began moving to neighborhoods where data suggests their children would have a better chance of escaping poverty.

“Although the United States spends $44 billion a year on affordable housing, that money perversely concentrates poverty in blighted neighborhoods,” Nick wrote. “The counterproductive result is that children are sentenced to grow up in areas rife with crime, teenage pregnancy and educational failure.”

The Seattle experiment is the latest research from a team of economists based at Harvard University, led by Raj Chetty, who have shown that geography matters enormously in American life. One implication of their work is that the country needs much more affordable housing in places with the best schools and social networks — places like Montgomery County, Maryland, and other hotbeds of Nimbyism.

It’s true that the Republican Party is often the main obstacle to fighting inequality and lifting stagnant living standards. Republican leaders oppose a higher minimum wage, adequate spending on schools and fair taxes on the rich and corporations. But the Republican Party isn’t the only problem, and I hope more progressives will be willing to take a second look at the problems in their own communities."