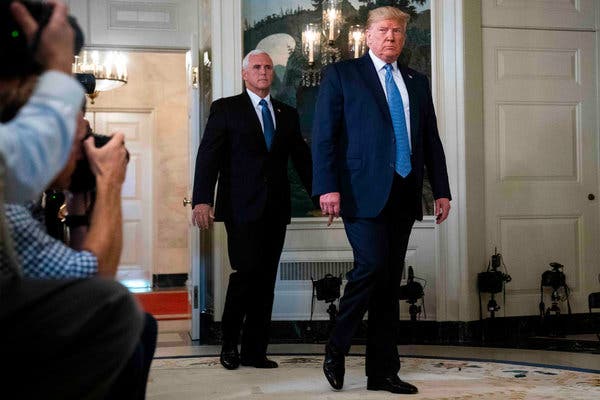 A decade ago, Daryl Johnson, then a senior terrorism analyst at the Department of Homeland Security, wrote a report about the growing danger of right-wing extremism in America. Citing economic dislocation, the election of the first African-American president and fury about immigration, he concluded that “the threat posed by lone wolves and small terrorist cells is more pronounced than in past years.”

When the report leaked, conservative political figures sputtered with outrage, indignant that their ideology was being linked to terrorism. The report warned, correctly, that right-wing radicals would try to recruit disgruntled military veterans, which conservatives saw as a slur on the troops. Homeland Security, cowed, withdrew the document. In May 2009, Johnson’s unit, the domestic terrorism team, was disbanded, and he left government the following year.

Johnson was prescient, though only up to a point. He expected right-wing militancy to escalate throughout Barack Obama’s administration, but to subside if a Republican followed him. Ordinarily, the far-right turns to terrorism when it feels powerless; the Oklahoma City bombing happened during Bill Clinton’s presidency, and all assassinations of abortion providers in the United States have taken place during Democratic administrations. During Republican presidencies, paranoid right-wing demagogy tends to recede, and with it, right-wing violence.

But that pattern doesn’t hold when the president himself is a paranoid right-wing demagogue.

“The fact that they’re still operating at a high level during a Republican administration goes against all the trending I’ve seen in 40 years,” Johnson told me. Donald Trump has kept the far right excited and agitated. “He is basically the fuel that’s been poured onto a fire,” said Johnson.

This past weekend, that fire appeared to rage out of control, when a young man slaughtered shoppers at a Walmart in El Paso. A manifesto he reportedly wrote echoed Trump’s language about an immigrant “invasion” and Democratic support for “open borders.” It even included the words “send them back.” He told investigators he wanted to kill as many Mexicans as he could.

Surrendering to political necessity, Trump gave a brief speech on Monday decrying white supremacist terror: “In one voice, our nation must condemn racism, bigotry and white supremacy.” He read these words robotically from a teleprompter, much as he did after the racist riot in Charlottesville, Va., in 2017, when, under pressure, he said, “Racism is evil — and those who cause violence in its name are criminals and thugs.”

Back then, it took about a day for the awkward mask of minimal decency to drop; soon, he was ranting about the “very fine people” among the neo-Nazis. Nevertheless, on Monday some insisted on pretending that Trump’s words marked a turning point. “He really did set a different tone than he did in the past when it comes to condemning this hate,” said Weijia Jiang, White House correspondent for CBS News.

If history is any guide, it won’t be long before the president returns to tweeting racist invective and encouraging jingoist hatreds at his rallies. In the meantime, everyone should be clear that what Trump said on Monday wasn’t nearly enough. He has stoked right-wing violence and his administration has actively opposed efforts to fight it. Further, he’s escalating his incitement of racial grievance as he runs for re-election, as shown by his attacks on the four congresswomen of color known as the squad, as well as the African-American congressman Elijah Cummings. One desultory speech does not erase Trump’s politics of arson, or the complicity of the Republicans who continue to enable it.

It’s true that the Obama White House, giving in to Republican intimidation, didn’t do enough to combat violent white supremacy. But Trump rolled back even his predecessor’s modest efforts, while bringing the language of white nationalism into mainstream politics. His administration canceled Obama-era grants to groups working to counter racist extremism. Dave Gomez, a former F.B.I. supervisor who oversaw terrorism cases, told The Washington Post that the agency hasn’t been as aggressive as it might be against the racist right because of political concerns. “There’s some reluctance among agents to bring forth an investigation that targets what the president perceives as his base,” he said. “It’s a no-win situation for the F.B.I. agent or supervisor.”

On Monday, by coincidence, Cesar Sayoc Jr., the man who sent package bombs to Democrats and journalists he viewed as hostile to Trump, was sentenced to 20 years in prison. In a court filing, his defense lawyers describe how he was radicalized. “He truly believed wild conspiracy theories he read on the internet, many of which vilified Democrats and spread rumors that Trump supporters were in danger because of them,” they wrote. “He heard it from the president of the United States, a man with whom he felt he had a deep personal connection.” He became a terrorist as a result of taking the president both seriously and literally.

Trump probably couldn’t bottle up the hideous forces he’s helped unleash even if he wanted to, and there’s little sign he wants to. If the president never did or said another racist thing, said Johnson, “it’s still going to take years for the momentum of these movements to slow and to die down.” As it is, Trump’s grudging anti-racism is unlikely to last the week. The memory of the mayhem he’s inspired should last longer."

Opinion | Trump Is a White Nationalist Who Inspires Terrorism - The New York Times
Posted by John H Armwood II at 7:48 AM