Opinion | The Tired and Poor Who Make America Great 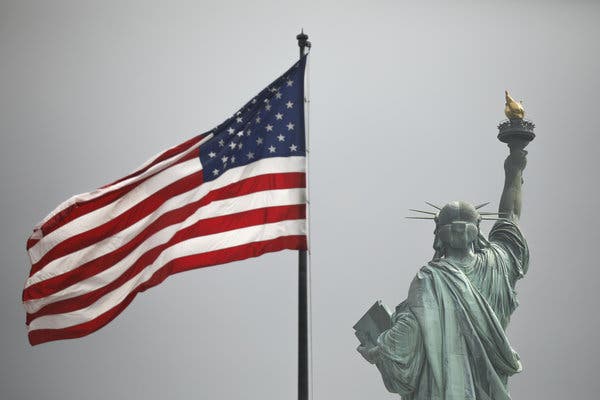 
"America is on the verge of grand human re-sorting. On Monday, the Trump administration announced new immigration rules that favor younger, healthier and wealthier newcomers, and make it easier to deny permanent residency to those relying on public assistance programs like Medicaid, or those who don’t show enough funds on their visa applications.
When asked about the apparent contradiction between the new rules and the famous poem inviting the world’s “tired and poor” inscribed on the Statue of Liberty, Ken Cuccinelli, the acting director of the United States Citizenship and Immigration Services, suggested an interpretation that adds “standing on their own two feet” as new eligibility criteria. He then reassured the public that no revisions to the actual statue would be made. Mr. Cuccinelli’s commitment to preserving historical monuments is heartening, but it’s a bit like keeping a can from Coca-Cola, America’s other global icon, and filling it with vinegar. America is not America if a person with the proverbial $200 in his pocket is not allowed here.
When I immigrated to the “land of the free” from Russia in my early 20s, I didn’t have to rely on public assistance. But I have seen enough immigrants who did — some because they came old and sick; others because they were struck by misfortune. Neither category wanted to become “a public charge,” the term referring to individuals likely to become dependent on the government. Those who are forced to leave their home countries don’t do so because they want to freeload. But life happens, just as it does to those with American passports.
Take my father-in-law. A successful Soviet-era journalist, he applied for an exit visa in 1979 with a plan to work for the radio station Voice of America. By the time he was finally allowed to leave in 1987, he had survived a massive heart attack. He suffered another one en route to Boston, then seven more, plus two strokes; Medicaid paid for his treatment. My father-in-law never adjusted to living in a tiny studio in a subsidized house, and to doing so on $600 a month. But he lived, having defied the odds assigned to him by the doctors in his own country.
The father of my childhood friend had a different path into the bleak territory of public assistance. After receiving death threats from the local mafia, he and his wife were forced to abandon their thriving business in Russia and seek refuge with their daughter, married to a Texan. My friend’s father was fiercely determined to never “get on the government’s neck.” An executive and entrepreneur for most of his life, he took a job stocking shelves in a suburban wine store and was able to get back on his feet, moving himself and his wife to a place of their own. Sadly, his first mortgage bill came alongside a Stage 4 cancer diagnosis. The wine store provided no health insurance, but he qualified for Medicaid. He continued to work while he could stand, using what was left of his disability checks toward his mortgage. The rest of his expenses were paid by his daughters, including those related to his funeral.
The Trump administration’s new immigration rules make these situations, with a basic guarantee of life and dignity for all, much harder to achieve. They continue with the politics of division — into “beautiful places” like Mar-a-Lago and “rat holes” like Baltimore, “good countries” and “shithole countries,” those who can “stand on their own two feet” and those who can’t. The moral damage that comes with this type of leadership is obviously not a concern for this president, or for those who support him.
They should be concerned, however, with what’s to come next: Any society that starts down the path of marginalizing certain groups will eventually need new targets. For decades, Republicans have been trying to get rid of the threadbare “safety net” under the pretext of self-reliance. With these new rules, passed without congressional approval, they moved closer. Once the concept of “standing on one’s own two feet” as a prerogative of good citizenship takes hold, it can be scaled — to the refugees, currently exempt from the rules, to naturalized citizens and even to those born American. People cheering for the Trump administration’s sorting policies today might need to reach out for help tomorrow — and get a sermon on self-sufficiency.
The America that harbors the world’s “tired and poor” is obviously not the America that President Trump and his ilk want. Mr. Cuccinelli went as far as suggesting the plaque with the iconic poem had been affixed in an attempt to justify the first “public charge.” But whatever they say, the principle inscribed in bronze on America’s most enduring symbol, and in our hearts, is the law of the land. As long as the Statue of Liberty stands, it renders Donald Trump an impostor, while those who come to build this country with their hard labor are its true citizens."

Opinion | The Tired and Poor Who Make America Great
Posted by John H Armwood II at 8:39 AM