Opinion | A Lust for Punishment - The New York Times 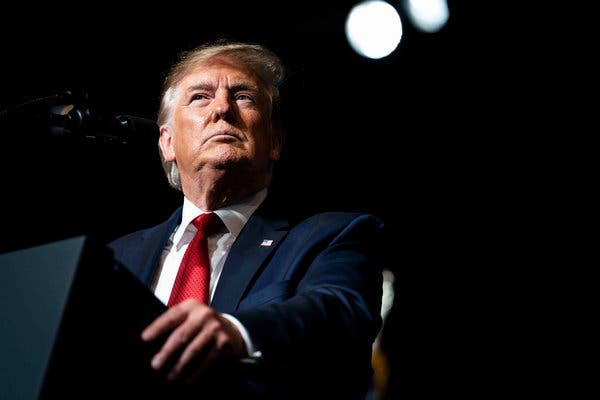 "President Trump continues to inflict pain on minorities in this country because it supports the white supremacist patriarchy.

There seems to be no limit to the cruelty Donald Trump and his administration are willing to exhibit and exact when it comes to immigrants and asylum seekers from Latin America.

And then conservatives in this country cheer, in much the same way that the Roman mobs in the Colosseum did as people were ripped to shreds by lions.

On Wednesday, Trump’s administration announced new rules that would allow migrant families to be held indefinitely. As The New York Times reported, “The new regulation would codify minimum standards for the conditions in family detention centers and would specifically abolish a 20-day limit on detaining families in immigration jails.”

The day before, the administration announced that immigrant families being held at the border wouldn’t be given flu vaccines. CBS News noted, “The U.S. will not provide vaccines for migrants — even after three migrant children have died in the past year from the flu.”

But none of this will disturb the people who support Trump. This is a large part of the reason they like him.

People often wonder how Americans who had been traditional Republicans could line up behind Trump, who most assuredly is not a traditional Republican. They ask how the religious right could warm to a man who is the opposite in terms of character and piety to all that it has hitherto professed.

I have posited that this is in part because Trump has for them transcended the ordinary and mundane and attained the status of folk hero, a realm in which th

President Trump’s administration announced that no immigrant families held at the border will receive flu vaccines, even after three migrant children have died from the flu in the past year.

But I think that there is also another facet worth exploring: the degree to which Trump’s own punitive spirit aligns with and gives voice and muscle to American conservatives’ long simmering punitive lust. And this insatiable desire to inflict pain has particular targets: women (specifically feminists), racial minorities, people who are L.G.B.T.Q. and religious minorities in this country. In short, the punishments are directed at anyone who isn’t part of, or supportive of, the white supremacist patriarchy.

The crack epidemic, which many viewed as an inner-city problem among mostly black and brown people, produced a vicious raft of drug laws and the 1994 Crime Bill. However, now that there is an opioid epidemic disproportionately affecting white people, there is a concerted effort to rebrand them as victims rather than criminals and to treat them with a compassion that was denied nonwhite people addicted to drugs in previous eras.

Women fighting for their own rights, equality and body autonomy have, throughout this country’s history, been met with hostility, vitriol, derision and even violence, from the women’s suffrage activists to the women’s liberation movement to our current activists for women’s reproductive rights.

The whole discussion of abortion and those who oppose a woman’s right to choose this legal and legitimate medical procedure is in part rooted in punishment. The woman was a reckless custodian of her body and dared to have sex, unprotected, at a time when she wasn’t prepared to be a mother or with a man she didn’t want to be her child’s father. For shame. She should be made to complete the pregnancy, give birth to the child and raise it. This is her punishment for sex.

The gay rights movement was born of fatigue of people being targeted and punished for the way they expressed their love and their gender. This has evolved from sodomy laws to anti-gay immigration policies to marriage exclusion to H.I.V. criminalization laws to bathroom bills.

In discussions about the disproportionate rates of black male incarceration or black men gunned down by the police, I can’t tell you how many times I’ve read or heard conservatives say that these black males’ own actions courted the punishment, that they got what they deserved.

This has ever been the case: the flaying of black flesh as punishment for some infraction, perceived or real, from the lash and hounds of slavery to the lynchings that surged after the Civil War, from state execution when the killing moved indoors to our current extrajudicial killings by the police in which the morbid act moves back outside.

And as Trump increases the pain, a great roar goes up from the Colosseum of Conservatism."

Opinion | A Lust for Punishment - The New York Times
Posted by John H Armwood II at 10:26 AM