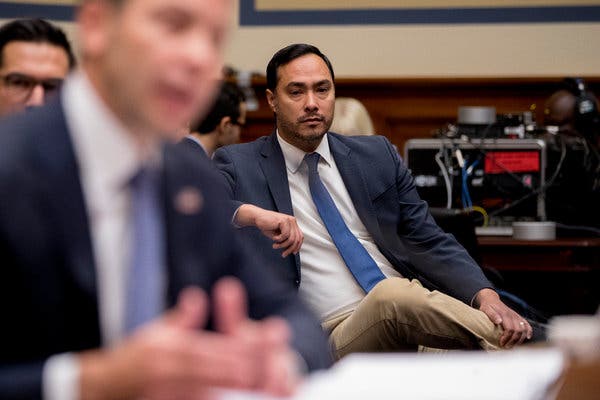 "We can’t misuse the charge in an effort to suppress protected speech.

Ms. Nossel is the chief executive officer of PEN America.

Representative Joaquin Castro of Texas at a hearing on Capitol Hill last month.

In the wake of the El Paso shootings, Representative Joaquin Castro of Texas created a stir with a tweet on his official account listing the names and employers of 44 residents of the San Antonio area who had contributed up to the legal limit to the Trump campaign. The information was a matter of public record but not widely known.

“Sad to see so many San Antonians as 2019 maximum donors to Donald Trump,” wrote Mr. Castro, who is the chairman of his twin brother Julián’s presidential campaign. He tagged two establishments, accusing their owners of “fueling a campaign of hate that labels Hispanic immigrants as ‘invaders.’”

Twitter duly exploded, accusing Mr. Castro of “doxxing” donors and warning that his post would incite a deluge of phone calls, vitriol and threats against those named. House Republicans are calling for an investigation, and some commentators are citing the incident as grounds to demand new limitations on campaign disclosure requirements.

But sharing data as basic as a name and affiliation, unaccompanied by any suggestion, much less threat, of action against those individuals is not harassment. And the future of open political discourse will require us to address the serious scourge of online harassment without misusing the charge in an effort to suppress protected speech.

While harassment is rightfully illegal, public shaming is not. Democracy depends upon the ability of politicians, journalists and citizens to draw attention to what they consider misdeeds. That our smash mouth discourse can sometimes trigger an outsized public backlash raises serious concerns. But the answer cannot be that we must all restrain ourselves from drawing attention to factual, publicly available information when there is a valid reason to do so.

According to Pew, more than 40 percent of adults online have experienced some form of virtual abuse. Virulent forms of harassment including threats of physical and sexual violence, doxxing (the exposure of private information like Social Security numbers) and cyberstalking (surveillance with the intent to kill, injure or menace) have perverted online discourse.

Mr. Castro’s tweet doesn’t rise to that level. Under the Texas penal code, online harassment is defined as sending “repeated electronic communications” likely to “harass, annoy, alarm, abuse, torment, embarrass or offend another.” His lone tweet did not encourage any specific action, nor provide phone numbers or addresses in a tacit invitation to supporters to reach out (though his inclusion of Twitter tags skirted the line).

True doxxing involves the disclosure of private or sensitive personal information, like Social Security numbers, cellphone numbers and names of children’s schools. It is intended to strike fear that the boundaries safeguarding our personal lives have been breached. Doxxing is the online equivalent of having an intruder climb up the fire escape and appear in the window.

While it is possible that some supporters could have harassed those named in the tweet — news reports recount at least one profane voice mail message — Mr. Castro cannot be held legally responsible for others’ harassing conduct that he did not urge. While some Twitter users did say that they would boycott the establishments named, refraining from patronizing a business is plainly not harassment.

In recent years, we have witnessed attempts to stretch legal definitions of harassment to cover speech that result in speculative forms of psychological harm like the embarrassment or vulnerability that individuals on the list may genuinely have felt. But defense of the First Amendment and open discourse demands resisting that wider and fuzzier definition. Involvement in politics — even as a donor — entails a certain willingness to engage in the rough-and-tumble of discourse with those who may make you feel uncomfortable for the views you hold. Being called out publicly, as opposed to menaced personally, is fair game.

Rather than cowering, some Castro critics have pushed back, including by pointing out that some names listed had also supported Mr. Castro. That approach is far better than calling for Mr. Castro to be punished, much less suggesting the repeal of campaign disclosure requirements (requirements that underpin public trust in our democracy and are crucial to the public’s right to know).

Elected officials hold a special duty to exercise the power of their pulpit responsibly. It’s fair to question whether Mr. Castro’s tweet was prudent or decorous. But to refer to it as doxxing or online harassment is inaccurate, and sows confusion over what online abuse actually looks like. It is far worse than this.

Suzanne Nossel is the chief executive officer of PEN America."