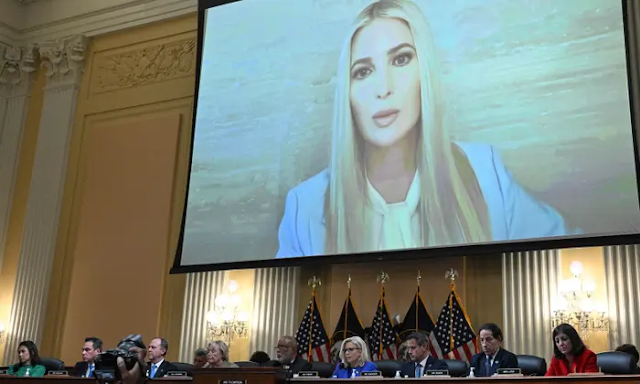 Donald Trump’s daughter and White House adviser Ivanka Trump told the congressional panel investigating the insurrection at the US Capitol on 6 January 2021, that she does not believe her father’s false claims that the 2020 election was stolen from him because of voting fraud.

Ivanka Trump was seen in a video deposition, shown to the public for the first time during the first hearing of the House panel.

She spoke of her perspective being changed after hearing that Bill Barr, who was Trump’s attorney general for most of 2020, until he resigned that December, had explained to her father repeatedly that he had lost the election.

“I respect Attorney General Barr. So I accepted what he was saying,” Ivanka Trump told congressional investigators.

And what Barr was saying was that his justice department had discovered no significant fraud to support Donald Trump’s claim – one the former president is still making – that massive voter fraud in several key states caused the 2020 election to be “stolen” from him.

The committee showed a video of Barr’s appearance before panel investigators. In that video, Barr called his former boss’s fraud claims “bullshit” and said that he had “repeatedly told the president in no uncertain terms that I did not see evidence of fraud that would have affected the outcome of the election. And frankly, a year and a half later, I still haven’t.”

He added that he told the president at the time that there was “zero basis” for his allegations that the election was rigged against him.

Barr said he spoke to Donald Trump shortly after the November 2020 result and “I made it clear to him that I did not agree with the idea of saying the election was stolen, and putting out this stuff, which I told the president was bullshit, and I didn’t want to be a part of it.”

Ivanka Trump was asked by committee investigators how Barr’s words affected her perspective about the election.

“It affected my perspective,” she said."

Ivanka Trump says she does not believe father’s claim 2020 election was stolen | Ivanka Trump | The Guardian
Posted by John H Armwood II at 8:19 AM