These states with trigger bans will outlaw abortion as Roe v. Wade is overturned - The Washington Post

Abortion will soon be banned in 13 states. Here’s which could be next. 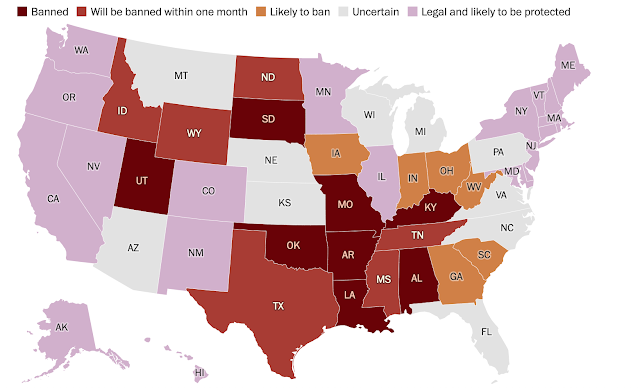 The Supreme Court’s overturning of Roe v. Wade on Friday sets off a cascade of antiabortion legislation that will affect roughly half the country.

Without the landmark precedent in place, access to abortion began to change quickly. First, 13 states with “trigger bans,” designed to take effect if Roe were struck down, will prohibit abortion within 30 days. At least eight states banned the procedure the day the ruling was released. Several others with antiabortion laws blocked by the courts are expected to act, with lawmakers moving to activate their dormant legislation. A handful of states also have pre-Roe abortion bans that could be reactivated, and others moved immediately to introduce new legislation.

In 20 states and the District of Columbia, abortion has been legal and is likely to be protected.

On Friday, Virginia Gov. Glenn Youngkin (R) said he will seek an abortion ban after 15 weeks of pregnancy. While most state legislatures have adjourned for the year, some governors have expressed an interest in convening special sessions to pass additional antiabortion legislation — or to remove antiabortion laws already on the books. Abortion access in other states will depend on the midterm elections.

States with abortion bans that will take effect within one month

Among this first wave, the antiabortion laws slated to take effect — the “trigger bans” — all work a little differently. Some activated immediately or as soon as a designated state official certified the court’s decision, while others will go into effect 30 days after the decision is announced.

Tell The Post: How do you feel about the Supreme Court’s abortion ruling?

States likely to ban abortion within weeks or months

In five states without trigger laws — Alabama, Georgia, Iowa, Ohio and South Carolina — courts have blocked or struck down recent laws that banned most or all abortions. Without Roe, those laws will probably take effect within weeks or months.

While Indiana has not passed a strict abortion ban, the Republican-led state plans to go into special session in early July and could crack down on the procedure. Meanwhile, West Virginia, another Republican-led state, never repealed its pre-Roe abortion ban, and recently added a constitutional amendment specifying that West Virginians do not have a right to abortion.

States where the fate of abortion rights remains uncertain

In Pennsylvania, Wisconsin and Michigan, Democratic governors have been a firewall against antiabortion legislation proposed or passed by Republican-led legislatures. The future of abortion access will depend on the upcoming midterms: If antiabortion Republicans win those governors mansions, Republican lawmakers will have a clear path to banning abortion.

A race to teach abortion procedures, before the bans begin

Kansas is another state to watch closely. An important access point for patients traveling from antiabortion states in the southeast, Kansas will hold a statewide referendum in August on a constitutional amendment that would eliminate abortion protections established by the state Supreme Court.

In Virginia, just hours after the Supreme Court’s decision, Youngkin said he had tasked four state lawmakers — all antiabortion Republicans — with writing legislation to ban most abortions after 15 weeks of pregnancy.

While Florida and Arizona have passed 15-week abortion bans, which allow over 90 percent of abortions to continue, lawmakers in the Republican-led states might try to go further in the coming months or years.

States where abortion is legal and likely to be protected

Many states have passed laws that explicitly protect the right to abortion, with several adding those protections this year in anticipation of the Supreme Court’s decision. Elsewhere, state courts have protected abortion access through state constitutions and past court decisions.

New Mexico and New Hampshire lack those explicit protections, but their state legislatures are not likely to move to ban the procedure.

Judging by current legislation, signals from lawmakers and interviews with experts, here’s how we expect the court’s decision to play out, state by state:

A previous version of this graphic incorrectly stated that the governors of Pennsylvania and North Carolina are up for re-election. They are term-limited.

Bonnie Berkowitz and Eugene Scott contributed to this report.

These states with trigger bans will outlaw abortion as Roe v. Wade is overturned - The Washington Post
Posted by John H Armwood II at 9:05 AM