Review of ‘The Plague Year: America in the Time of Covid” by Lawrence Wright - The Washington Post

Why America failed to control the pandemic

"In “The Plague Year,” Lawrence Wright explores the missed opportunities and biggest mistakes.

But as I worked my way through “The Plague Year,” an older book of Wright’s came to mind more often: “The Looming Tower,” a masterful journey down the roads that culminated in the 9/11 attacks. There, too, a gathering menace was ignored, experts were sidelined, and action was deferred until an unfathomable calamity was upon us. “The most frightening aspect of this new threat . . . was that no one took it seriously,” Wright wrote in that 2006 book. “It was too bizarre, too primitive and exotic.” It was a peril that seemed unthinkable, “up against the confidence that Americans placed in modernity and technology and their own ideals to protect them from the savage pageantry of history.”

“The Plague Year” does not reach the heights of “The Looming Tower” — few books do — but a global pandemic is an even deadlier threat in that savage pageantry of history, one for which the United States could have been far better prepared. Wright’s new book is most effective at detailing the missed opportunities to keep things from going so wrong. “Tens of thousands of people were bound to perish,” he writes. “But perhaps not hundreds of thousands.” This is the story of how we got that extra zero. 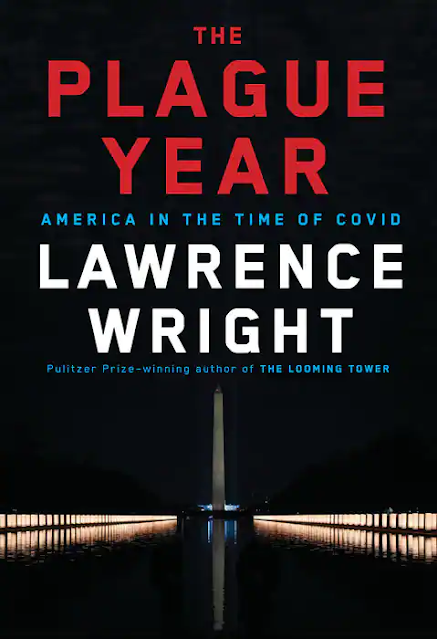 There were warnings; there were even manuals. Wright describes the Obama administration’s 69-page “Playbook for Early Response to High-Consequence Emerging Infectious Disease Threats and Biological Incidents,” a document bequeathed to Donald Trump’s incoming team during the presidential transition, outlining how various agencies should respond in case of a pandemic or bioweapon attack. Wright also cites “Crimson Contagion,” a 2019 exercise led by Trump’s Department of Health and Human Services that included the Pentagon, the National Security Council, major hospitals, health-care organizations and a dozen state governments. In the exercise, tourists contracted a novel influenza during a China trip and quickly spread it across the world. Agencies couldn’t agree who was in charge; cities challenged recommendations from the Centers for Disease Control and Prevention; ventilators and protective equipment for medical workers were insufficient; business struggled to remain open. With no vaccine, nearly 600,000 Americans soon died. It was “spookily predictive of what was to come,” Wright emphasizes, but few reforms were instituted in response.

Blessed with world-class medical and research institutions and a robust pharmaceutical industry, the United States could have been well-positioned to deal with a pandemic, or at least address some of the failings revealed by the exercise, Wright writes. But three factors conspired against us. First, it took U.S. authorities too long to grasp the full threat. Wright cites former CDC director Robert Redfield’s conclusion that, if the agency’s experts had been allowed to visit China in early January 2020, “they would have learned exactly what the world was facing,” particularly the virus’s human-to-human transmissibility. Second was the CDC’s failure to develop an effective testing kit in a timely manner, “perhaps the lowest point in the history of a very proud institution,” Wright laments. And third was the transformation of masks from a public health measure to a cultural and political war, one the president of the United States eagerly waged.

“The image of the maskless president animated his base,” Wright explains. “Maskless, he appeared defiant, masculine, invulnerable, whereas to wear a mask would be caving in, being weak.” Though he praises the former president for imposing travel restrictions and promoting Operation Warp Speed for vaccine development, Wright brands Trump a “saboteur” for ridiculing mask-wearing and a “superspreader” for his continued political rallies and his well-attended White House event honoring the new Supreme Court justice, Amy Coney Barrett.

“Political divisiveness doesn’t lend itself to having a coordinated, cooperative, collaborative response against a common enemy,” the National Institutes of Health’s Anthony Fauci tells Wright, with considerable understatement. Absent such a response, options grow limited. The trade-offs that have defined the American experience with the coronavirus — such as embracing a national lockdown vs. averting an economic meltdown — were hardly inevitable. We made them so.

The virus isn't transforming us. It's accelerating the changes already underway.

Wright provides memorable historical context — during the flu pandemic a century ago, an Anti-Mask League emerged in San Francisco, proving there is really nothing new in the world — and even literary references, reminding readers that Boccaccio’s “Decameron” featured 10 friends sheltering in place in plague-era Florence. But he also holds up some heroes for our time. Researchers such as Barney Graham at the National Institute of Allergy and Infectious Diseases and his collaborator Jason McClellan receive copious praise for their vaccine development efforts, for instance, while Wright hails front-line medical workers from Seattle to New York for their professional and psychological fortitude. “Emotions were deferred, but they clawed deep scars,” he writes.

Chunks of “The Plague Year” are told through the experiences of Matthew Pottinger, deputy national security adviser in the Trump White House, who by January 2020 already regarded the outbreak as a major crisis. In some ways he seems an ideal protagonist: A former journalist, Pottinger covered the SARS crisis in China for the Wall Street Journal; he is married to a former CDC virologist; and his brother is an infectious-disease doctor in Seattle. Yet Pottinger is not always the most compelling of heroes, indulging in the classic laments of conflicted Trump officials — This time I’ll resign; no, maybe next time! — and getting kudos for, yes, bucking peer pressure and wearing a mask in the White House. The most memorable Pottinger moment is when he admits to his brother in March 2020 that the administration’s efforts to distribute protective equipment for medical personnel were too late. “I’m doing all I can, and help is on the way,” Pottinger says, “but it probably won’t be in time — so start tearing up bedsheets and turning them into lab coats, raid the Salvation Army for garments, wrap bras around your face in place of face masks if you have to.”

When top officials engaged, they often did so unofficially. Wright details how Deborah Birx, who served as the White House’s coronavirus task force coordinator, took an extended road trip with epidemiologist Irum Zaidi — “racking up 25,000 miles as they crossed the country eight times, visiting forty-three states” — to meet with politicians, health officials and hospital executives. “She was the only federal official doing so,” Wright points out. (He calls the chapter on their travels “Thelma and Louise,” not a particularly encouraging omen.)

Other books on the coronavirus crisis have imagined how this experience might change the country or the world. Wright, to his credit, mostly stops short of such prognostications, but he still thinks big. The lack of a comprehensive national plan, he concludes, led one pandemic to become multiple pandemics in this country, lived differently by race, age and geography. (“One has to wonder,” he posits, “how the nation might have responded had the victims been younger, whiter, richer.”) And though Wright is open to the lab-leak theory of the pandemic’s origins — “pathogens do escape from labs, even highly secure ones,” he notes — he points to major challenges ahead, no matter how this began. If the virus evolved in nature, we should “expect recurrences” because of all the new ways humans are interacting with animal life; if it came from a lab, “then it is a reminder that science is engaged in experiments that invite catastrophe with the smallest slip,” he writes. “In either case, Covid-19 is a harbinger.”

That is another way this story evokes the conundrums of 9/11. Will we ask the right questions and learn the right lessons? Or, imagining the end in sight, have we already begun to regard the unthinkable — nearly 600,000 U.S. deaths so far — as acceptable?

Review of ‘The Plague Year: America in the Time of Covid” by Lawrence Wright - The Washington Post
Posted by John H Armwood II at 7:59 AM