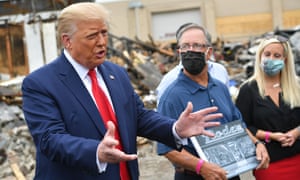 Trump is a stone-cold, devilish racist.
“We have to condemn the dangerous anti-police rhetoric,” Trump said. “It’s getting more and more, it’s very unfair. You have some bad apples, we all know that, and those will be taken care of through the system, and nobody’s going to be easy on them either.”
Other officers “choke” under “tremendous pressure”, he added. “They may be there for 15 years and have a spotless record, and all of sudden they’re faced with a decision, you have a quarter of a second, quarter of a second to make a decision. And if they make a wrong decision, one way or the other, they’re either dead, or they’re in big trouble.
He avoided repeating a slip made in a TV interview on Monday night when he compared such “choking” incidents to a golfer crumbling under pressure on an important putt."

Trump blames racism in policing on 'bad apples' during visit to Kenosha | US news | The Guardian
Posted by John H Armwood II at 10:00 PM