Opinion | Gerald Ford Rushed Out a Vaccine. It Was a Fiasco. - The New York Times 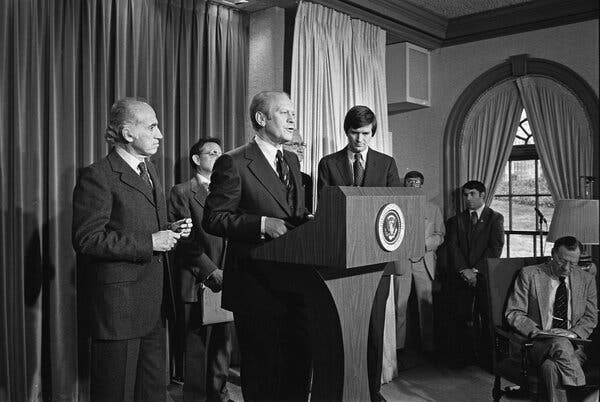 "Last week, news arrived that President Trump had lurched into what may be his most reckless obsession yet: His administration would probably seek an “emergency use authorization” for a Covid-19 vaccine long before some scientists believe it would be safe to do so.
A spokesman for the Department of Health and Human Services immediately addressed the obvious suspicion: “Talk of an ‘October surprise’”— an attempt to manufacture good news just before the November election — “is a lurid Resistance fantasy.”
As he does often, however, the president proudly admitted to the exact thing his underling insisted was inconceivable.
“The deep state, or whoever, over at the F.D.A.,” he tweeted recently at Stephen Hahn, the commissioner of the Food and Drug Administration, “is making it very difficult for drug companies to get people in order to test the vaccines and therapeutics. Obviously, they are hoping to delay the answer until after Nov. 3. Must focus on speed and saving lives!”
To that end, the Centers for Disease Control and Prevention has notified public health officials across the country to prepare to distribute a coronavirus vaccine to health care workers and other high-risk groups as soon as late October.
The president’s desperate words betray a gamble: Yes, rushing out a vaccine in an emergency may save lives, but it can also jeopardize safety, further erode public confidence in vaccines — and possibly kill.
History offers Mr. Trump a cautionary tale. In February 1976, hundreds of soldiers at Fort Dix, N.J., contracted a new strain of the H1N1 virus that seemed to be a descendant of the one responsible for the 1918 flu pandemic, which killed at least 50 million people worldwide and possibly as many as 100 million.
Back in those days, the World Health Organization twice a year convened a panel of experts to determine which strains of influenza should be included in that year’s flu shots, then provided the necessary “seed virus” to manufacturers. President Gerald Ford, however, decided to leapfrog the protocol in the face of the news out of Fort Dix.
It was, after all, an election year, and Mr. Ford, who had risen to the presidency upon Richard Nixon’s resignation 19 months earlier, was seeking his first full term.
On March 22, Mr. Ford met with senior administration officials, who recommended a mass vaccination program. A memo marked “the president has seen” warned of “the ingredients for a pandemic” though also noted that “an argument can be made for taking no extraordinary action.”
But Mr. Ford was advised that Congress would likely act anyway — which meant they, not he, would get the credit for a potentially heroic decision — and that the government “can tolerate unnecessary health expenditures better than unnecessary death and illness.” He was also reminded of a significant political consideration: “Congress, the media and the American people will expect some action.”
Two days later, he met with a so-called blue ribbon panel of experts and then appeared before television cameras. Telling reporters that “we cannot afford to take a chance with the health of our nation,” he announced that he was requesting an immediate $135 million congressional appropriation “for the production of sufficient vaccine to inoculate every man, woman and child in the United States.”
He went on to say that he was directing the what was then known as the Department of Health, Education and Welfare “to develop plans that would make this vaccine available to all Americans” in the fall.
An unnamed official at the W.H.O., which had not been consulted, expressed his organization’s surprise in widely quoted comments, and noted that “no other countries have plans for mass inoculations” against what was popularly known simply as swine flu.
U.S. officials immediately pressured the W.H.O. to endorse Mr. Ford’s decision. ­And, as the historian George Dehner noted, “The pressure worked: by the next day W.H.O. officials were quoted in the news media as stating, ‘W.H.O. endorses President Ford’s plan for massive inoculation against swine flu virus.’”
That fall, celebrities lined up to get jabbed with the vaccine before cameras to set an example — including the president, sleeve rolled up, in the Oval Office. On “Saturday Night Live,” Chevy Chase did his famous Ford impression sporting a syringe in his arm during a debate against Dan Aykroyd’s Jimmy Carter.
As it turned out, the H1N1 strain never made it out of Fort Dix, where only one Army recruit died. And, as it also turned out, this swine flu was not nearly as virulent as the 1918 influenza.
But fast-tracking the vaccine for broad distribution among the public carried risks. Of the 45 million vaccinated against the swine flu, an estimated 450 people developed the paralyzing syndrome Guillain-Barré and of those, more than 30 died. The National Academy of Medicine subsequently concluded that people who received the 1976 swine flu vaccine had an increased risk for developing Guillain-Barré.
The emergence of Guillain-Barré led the government to suspend and effectively end its mass vaccination effort in December.
In all, it’s a complicated tale. Were the motivations behind the crash vaccination program political, or a sincere but perhaps misguided sense of urgency about the public health, or a little of both? Philip M. Boffey, a science writer at The New York Times, summed it up this way in an article headlined “Soft Evidence and Hard Sell.”

Has the government acted wisely in launching the swine flu inoculation campaign? Reasonable people may reach conflicting answers. Critics consider the program a waste of money, and a potentially dangerous one at that, while proponents call it sound preventive medicine.
It’s clear that the scare tactics used to promote the campaign are unwarranted. Many participants in the drama have implied that another 1918 disaster is imminent. Health officials used that fear to help sell the program to their political superiors; President Ford used it to pry funding from Congress and to goad the American public to participate, and the media, ever on the lookout for a compelling news angle, repeatedly stressed the 1918 analogy. The result has been confusion and exaggerated fears that interfere with sound judgment.

That said, the very reason Gerald Ford had his job in the first place was that, when Vice President Spiro Agnew resigned in scandal just as the first inklings of the possible impeachment of Richard Nixon were being raised, senators said they would confirm only a vice-presidential appointee who would provide a steady, mature hand on the tiller should he rise to the Oval Office. And that was precisely Gerald Ford’s reputation.
If steady, mature Gerald Ford succumbed to haste when his presidency was on the line, imagine what Donald Trump will do. But maybe, just maybe, Mr. Trump can finally learn a lesson from history and move prudently, not impetuously, in rolling out new vaccines for Covid-19. And if that means they come out after the election, so be it.
Jerry Ford’s Hail Mary didn’t work, after all: He lost to Jimmy Carter anyway. That’s a history lesson even Donald Trump can understand."
Opinion | Gerald Ford Rushed Out a Vaccine. It Was a Fiasco. - The New York Times
Posted by John H Armwood II at 8:06 AM