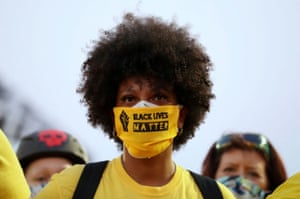 "The vast majority of the thousands of Black Lives Matter protests this summer have been peaceful, with more than 93% involving no serious harm to people or damage to property, according to a new report tracking political violence in the United States.


But the US government has taken a “heavy-handed approach” to the demonstrations, with authorities using force “more often than not” when they are present, the report found.
And there has been a troubling trend of violence and armed intimidation by individual actors, including dozens of car-ramming attacks targeting demonstrators across the country.
The new data on protests and the US government’s response comes from the Armed Conflict Location and Event Data project (Acled), an organization that has long tracked political violence and unrest in regions around the world, together with Princeton University’s Bridging Divides Initiative.
Data assembled by Acled has been viewed as a reliable source of information on the death toll in Yemen, civilians killed by governments in Africa, and political violence against women, among other conflicts. The organization launched a new “US crisis monitor” project this year, concerned that the US is “at heightened risk of political violence and instability going into the 2020 general election”.
The results of the study present a stark contrast to claims made by the Trump administration, and widely circulated by Fox News and other right-wing media outlets, that the US is being overrun by violent left-wing protesters and “domestic terrorists”.
“There have been some violent demonstrations, and those tend to get a lot of media coverage,” Dr Roudabeh Kishi, Acled’s Director of Research & Innovation, told the Guardian. “But if you were to look at all the demonstrations happening, it’s overwhelmingly peaceful.”
Between late May and the end of the August, Acled and Princeton researchers documented 7,750 demonstrations associated with the Black Lives Matter movement in more than 2,000 different locations across the United States, as well as more than 1,000 protests related to Covid-19. About a third of the Covid-19 protests were linked to schools reopening, the report found, all of them peaceful protests. There were also at least 70 documented protests over Covid-19 involving healthcare workers, and at least 37 demonstrations focused on the eviction crisis.
While the overwhelming majority of all the different kinds of protests tracked over this time were peaceful, the report did find a troubling trend of violence from both government forces and non-state actors.
Government authorities were more likely to intervene in Black Lives Matter protests than in other demonstrations, and also more likely to intervene with force, like using tear gas, rubber bullets, and pepper spray or beating demonstrators with batons, the researchers found.
They documented 392 incidents this summer in which government authorities used force on Black Lives Matter demonstrators.
Journalists covering Black Lives Matter protests were also met with violence from government forces in at least 100 separate incidents across dozens of states this summer. One journalist was blinded after being hit in the eye with a rubber bullet while covering protests over George Floyd’s killing in Minneapolis.
Violent intervention from government forces did not make protests more peaceful, the report concluded. In Portland specifically, the report found that intervention from federal authorities in the protest “only aggravated unrest”, with the number of “violent demonstrations” rising from 53% to nearly 62% of all events “after federal agents arrived on the scene”.
Armed individuals were documented at at least 50 protests this summer.

“Individual perpetrators — sometimes linked to hate groups like the KKK — have launched dozens of car-ramming attacks targeting demonstrations around the country,” the researchers wrote."
Nearly all Black Lives Matter protests are peaceful despite Trump narrative, report finds | World news | The Guardian
Posted by John H Armwood II at 8:16 AM