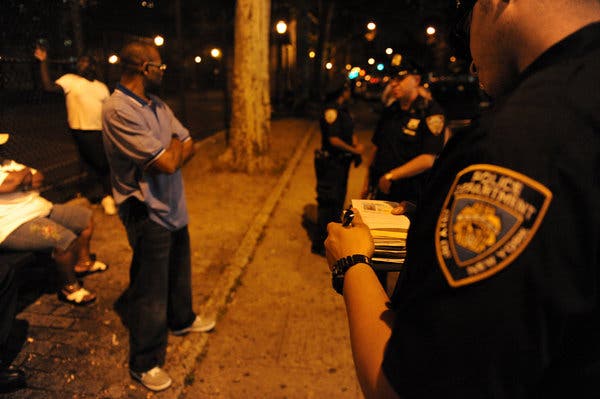 "During Michael R. Bloomberg’s tenure as mayor of New York City, police officers stopped and questioned people they believed to be engaged in criminal activity on the street more than five million times.

Officers often then searched the detainees — the vast majority of whom were young black and Latino men — for weapons that rarely materialized.

The encounters were part of a controversial program known as “stop-and-frisk,” which defined policing under Mr. Bloomberg.

As Mr. Bloomberg, the 108th mayor of New York, lays the groundwork for a possible presidential campaign, his legacy with stop-and-frisk has emerged as a vulnerability for him on the campaign trail.

Each morning, get the latest on New York businesses, arts, sports, dining, style and more.

On Sunday he apologized for his role in promoting a policy during his time in office that eroded trust of the police in black and Latino neighborhoods.

“Our focus was on saving lives,” he said during a speech at a black church in Brooklyn. “But the fact is: Far too many innocent people were being stopped.”

Here’s why the program was and remains a divisive issue in New York.

Stop-and-frisk is a crime-prevention strategy that had been a staple of policing in the United States for more than 30 years before Mr. Bloomberg took office. It allows police officers to detain someone for questioning on the street, in public housing projects or in private buildings where landlords request police patrols.

Officers are required to have reasonable belief that the person is, has been or is about to be involved in a crime. If police officers believe the detainee is armed, an officer can conduct a frisk by passing his hands over the person’s outer garments.

The strategy spread with the adoption of the data-driven Compstat management system in the 1990s, which allowed police to track and respond to crime trends in real time.

“The temperature in the city at the time was that the police were at war with black and brown people on the streets,” said Jenn Rolnick-Borchetta, the director of impact litigation at the Bronx Defenders, one of the groups that has successfully sued the Police Department over the practice. “And that is how people experienced it.”

Why did Mr. Bloomberg support it?

At the same time that officers were conducting more searches as part of stop-and-frisk, crime continued to decline, a correlation that Mr. Bloomberg and his police commissioner, Raymond W. Kelly, viewed as cause and effect. The two men said stop-and-frisk was helping to take guns off the street and reduce violence across the city.

Statistics appeared to back them up: In 2002, Mr. Bloomberg’s first year in office, the number of murders in the city fell below 600, and dropped to 335 by the time he left office in 2013. Even as the amount of crime rose or fluctuated in other cities, New York’s crime rate declined, continuing a streak that had begun in 1991.

Former Mayor Michael R. Bloomberg of New York and his police commissioner, Raymond W. Kelly, defended the stop-and-frisk policy in the face of criticism.Christoph Bangert for The New York Times

Mr. Bloomberg and Commissioner Kelly fiercely defended stop-and-frisk in the face of criticism and legal challenges. They argued that it was an essential practice for police, and predicted — wrongly, it would turn out — that curtailing it would lead to a dramatic rise in crime.

“Look at what’s happened in Boston,” Mr. Bloomberg said in 2013. “Remember what happened here on 9/11. Remember all of those who’ve been killed by gun violence and the families they left behind.”

Opponents said it was racist and counterproductive

But more factors affect crime trends than just police tactics, and critics of the program said that under Mr. Bloomberg it gave officers overly broad discretion to target mostly black and Latino boys and men for stops.

In 2009, black and Latino people in New York were nine times as likely to be stopped by the police compared to white residents.

The strategy was used with such intensity that officers in the Brooklyn neighborhood of Brownsville conducted 52,000 stops over eight square blocks between January 2006 and March 2010 — the equivalent of one stop for each resident there every year. The arrest rate was less than one percent for the 14,000 residents.

The policy resulted in a series of lawsuits by black and Latino men. One man, Nicholas Peart, described being held at gunpoint on his 18th birthday as an officer passed his hand over the young man’s groin and buttocks before leaving without an explanation — one of five times he had been stopped by the police.

“Essentially, I incorporated into my daily life the sense that I might find myself up against a wall or on the ground with an officer’s gun at my head,” he wrote in The Times. “For a black man in his 20s like me, it’s just a fact of life in New York.”

Only 14 out of every 10,000 stops conducted during the Bloomberg era turned up a gun, and just 1,200 out of every 10,000 ended with a fine, an arrest or the seizure of an illegal weapon, according to police data analyzed by the New York Civil Liberties Union. A Columbia University professor said the stops were no better at producing gun seizures than chance.

Black and Latino people were more likely be to stopped and frisked, even though their white counterparts were twice as likely to be found with a gun, according to the New York Civil Liberties Union.

“This is where the racial bias is particularly clear,” Christopher Dunn, the legal director of the group, said.

And a judge said it was illegal

The controversy culminated with a federal judge in Manhattan ruling in 2013 that the searches amounted to a “policy of indirect racial profiling” of black and Latino people. The ruling covered three concurrent cases.

According to data and testimony presented at trial, the police targeted black and Latino males as young as 13 for being in neighborhoods with high crime rates or for making “furtive” movements — a loosely defined term that encapsulated virtually any type of behavior, such as sitting on benches, looking over a shoulder or going into a building with a broken front door. Dissenting officers described being pressured to make stops to meet numerical quotas.

The city argued in court that a stop that did not result in a summons, arrest or weapons seizure still prevented crime by discouraging people from carrying guns.

“That was the theory that Bloomberg supported, that if you let them know that they might be stopped anytime, anywhere, that they will stop bringing out their guns,” the judge who made the ruling, Shira Scheindlin, now a private mediator and lawyer, said on Sunday.

Mr. Bloomberg defended the practice as recently as January, denying any racial bias in the policy by pointing to the drop in murders during his time in office.

He struck a different tone on Sunday.

“I got something important really wrong,” he said at the Christian Cultural Center, a black megachurch in Brooklyn. “I didn’t understand back then the full impact that stops were having on the black and Latino communities.”

Crime continued to fall after the policy was abandoned

Stop-and-frisk became a key issue in the 2013 mayoral race. Mayor Bill de Blasio won a long-shot campaign that year in part because he promised to undo the heavy-handed policing tactics of the Bloomberg administration.

During the campaign, Mr. Bloomberg criticized the attacks on stop-and-frisk as political showmanship that risked people’s lives. But his predictions about what would happen if the strategy was eliminated were wrong.

Mr. Bloomberg appealed Judge Scheindlin’s ruling, but Mr. de Blasio agreed to implement court-ordered reforms. The changes included mandating most officers to wear body cameras and the entire force to be trained in de-escalating conflict and recognizing their own bias.

But racial disparities persist in the street-stop program, and a federal monitor overseeing reforms has repeatedly raised concerns that officers and supervisors do not document and review stops in accordance with Police Department policy. The monitor, Peter L. Zimroth, said the failures impeded efforts to make sure reforms were taking hold.

“Addressing the persistent problem of underreporting of stops and the failure of supervisors to deal with that underreporting and the quality of the stop reports that are filed must be part of that effort,” Mr. Zimroth said".