Bloomberg's weak apology for stop and frisk is too little, too late | Derecka Purnell | Opinion | The Guardian 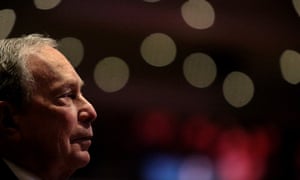 "Bloomberg's weak apology for stop-and-frisk is too little, too late

Michael Bloomberg should pay more than lip service to black people. He should redistribute his massive wealth to communities he harmed

“Over time, I’ve come to understand something that I long struggled to admit to myself,” he said. “I got something important really wrong. I didn’t understand the full impact that stops were having on the black and Latino communities. I was totally focused on saving lives, but as we know, good intentions aren’t good enough. Now, hindsight is 20/20. But, as crime continued to come down as we reduced stops, and as it continued to come down during the next administration, to its credit, I now see that we could and should have acted sooner and acted faster to cut the stops. I wish we had. I’m sorry that we didn’t. But, I can’t change history. However, today I want you to know that I realize … I was wrong, and I’m sorry.”

Forgiving him would be ungodly. New York police department officers have been stopping and frisking people for decades. Under Bloomberg, half of the people stopped were black, a third were Latinx. About half were 14-24 years old, a tiny fraction of the city’s population. And while recorded police pat-downs and rough-ups have started to decline, they are disproportionately increasing for black people, up to 52% in 2016, 57% in 2017 and 2018, and 60% in 2019, according to the New York Civil Liberties Union. Police found no weapon on 93% of the people stopped, and it is unclear what was found on the remaining 7%. Actually, among people that the police frisked, black and Latinx people were less likely than white people to have a weapon on them.

Black people have long known that the policies are racist and target them more than other groups. In 1966, James Baldwin wrote movingly in A Report from Occupied Territory about what it means to live under stop-and-frisk policies as a black person: “The police are afraid of everything in Harlem and they are especially afraid of the roofs, which they consider to be guerrilla outposts. This means that the citizens of Harlem who, as we have seen, can come to grief at any hour in the streets, and who are not safe at their windows, are forbidden the very air. They are safe only in their houses – or were, until the city passed the No Knock, Stop and Frisk laws, which permit a policeman to enter one’s home without knocking and to stop anyone on the streets, at will, at any hour, and search him. Harlem believes, and I certainly agree, that these laws are directed against Negroes. They are certainly not directed against anybody else.”

But Bloomberg has, up until recently, been loth to admit the harm that stop and frisk does to communities of color. In a radio interview in 2013 he said: “One newspaper and one news service, they just keep saying ‘oh it’s a disproportionate percentage of a particular ethnic group.’ That may be, but it’s not a disproportionate percentage of those who witnesses and victims describe as committing the [crime]. In that case, incidentally, I think we disproportionately stop whites too much and minorities too little. It’s exactly the reverse of what they’re saying. I don’t know where they went to school, but they certainly didn’t take a math course. Or a logic course.” Now he’s changed his tune, but it’s too little, too late.

Bloomberg’s presidential pivot is in sharp contrast to how most presidential hopefuls addressed their criminal justice records. Senator Cory Booker awkwardly dodged questions about Newark police department’s history of brutality. Senator Kamala Harris doubled down on her problematic prosecutorial decisions; at a recent town hall she told formerly incarcerated people that they should ask other candidates about their records before asking her to reconcile her record.

Mayor Pete Buttigieg had to briefly respond to outraged black residents after a member of his police force killed a black man allegedly breaking into a car with a knife. Before jumping in the race, Vice-President Joe Biden conveniently apologized for championing the disastrous 1994 Crime Bill in front of the Rev Al Sharpton’s National Action Network.

In this tradition, Bloomberg apologized, but his apology is incomplete. Rather than “I was wrong,” he should have said, “I was racist. I was classist. The policies were racist and classist. I encouraged my police force to violate the privacy and dignity of black and brown people by touching their bodies under the threat of a gun or a nightstick.”

Bloomberg should pay more than lip service and an offering to black churchgoers. He can fund campaigns by organizations like BYP100 or Communities United for Police Reform in New York City. Or, he can learn from activists in Chicago, who fought for and won reparations for black survivors of torture from the Chicago police department. Their city council approved a $5.5m settlement; in addition the city will pay for free counseling, education and employment services and provide a city-wide school lesson on police violence.

Instead of raising money or spending his own for a multimillion-dollar presidential run, Bloomberg, who is worth $52bn, should redistribute that wealth to the people of color and organizations in New York City who suffered under his administration."

Bloomberg's weak apology for stop and frisk is too little, too late | Derecka Purnell | Opinion | The Guardian
Posted by John H Armwood II at 12:45 PM