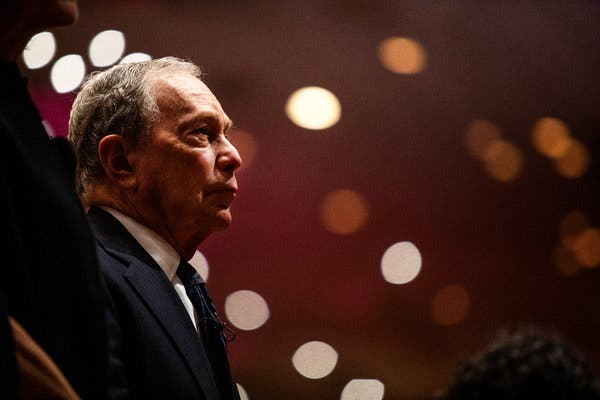 His apology for the stop-and-frisk policy is politically convenient.

Last Sunday I wrote a column entitled “You Must Never Vote for Bloomberg” because of Michael Bloomberg’s promotion, advocacy and defense of the racist stop-and-frisk policy that ballooned during his terms as mayor of New York City.

Speaking at the Christian Cultural Center, a black megachurch in Brooklyn, Bloomberg said:

“Over time, I’ve come to understand something that I long struggled to admit to myself: I got something important wrong. I got something important really wrong. I didn’t understand that back then the full impact that stops were having on the black and Latino communities. I was totally focused on saving lives, but as we know, good intentions aren’t good enough. Now, hindsight is 20/20. But, as crime continued to come down as we reduced stops, and as it continued to come down during the next administration, to its credit, I now see that we could and should have acted sooner and acted faster to cut the stops. I wish we had. I’m sorry that we didn’t. But, I can’t change history. However today, I want you to know that I realize back then I was wrong, and I’m sorry.”

This is a necessary apology, but a hard one to take, coming only now, as he considers a run for the Democratic nomination, a nomination that is nearly impossible to secure without the black vote.

It is impossible for me to take seriously Bloomberg’s claim that he didn’t understand the impact that stop-and-frisk was having on the black and brown communities when he was in office.

No, I believe that he knew very well, and understood clearly, the pain that he was causing, but he was making a collateral damage argument: Because there was crime and many of those committing those crimes were born with black or brown skin, all those with that skin should be presumed guilty until proven innocent.

It is important to remember that racism can exist in the absence of malice, that this dragnet presumption of guilt, even if well intentioned, amounted to a systemic racism to which Bloomberg was not only apathetic, but zealous about.

It is also hard to take his apology seriously because as recently as January he was still vigorously defending the policy, making the incredulous and insulting claim that during the execution of stop-and-frisk “we certainly did not pick somebody by race.”

It’s hard to take it seriously because as The New York Post reported Sunday, the Police Benevolent Association president, Patrick Lynch, slammed Bloomberg’s convenient apology, saying, “Mayor Bloomberg could have saved himself this apology if he had just listened to the police officers on the street.” He continued:

“We said in the early 2000s that the quota-driven emphasis on street stops was polluting the relationship between cops and our communities. His administration’s misguided policy inspired an anti-police movement that has made cops the target of hatred and violence, and stripped away many of the tools we had used to keep New Yorkers safe.”

This was a maximum pressure campaign targeted against black and brown communities, an intimidation tactic to signal constant surveillance and random checks. These whole communities were under siege, and it not only did lasting damage to the relationship between those communities and the Police Department, it accrued immeasurable psychological damage to an entire generation of black and brown boys and men.

But, this is something that black voters must contend with: politicians who do harm through policy to black communities, then come forward with admissions and contrition when they need black people’s votes.

I haven’t forgotten that it was just this year, as he was about to enter the race, that Joe Biden finally offered a full apology for the disastrous 1994 crime bill that wreaked havoc on the black community, after having defended the bill for years. Biden offered his apology at the National Action Network’s Martin Luther King Jr. breakfast.

Bloomberg needed to apologize. But the apology is not for the sake of the hundreds of thousands of young black and brown men subjected to his millions of stops. There, the damage is done. The grip of a strange man’s hands, with the power of a badge and gun, groping their bodies will stay with them. The personal, physical trauma and violation that he endorsed will linger for a lifetime.

Bloomberg needed to apologize so that the truth could be told: New York violated the rights and bodies of a generation of black and brown boys and men at the eager, willful insistence of its mayor.

Black voters — and all Democratic voters — must ask themselves: Is Bloomberg the antidote to what ails America on race and criminal justice, or is he one of its vectors?"