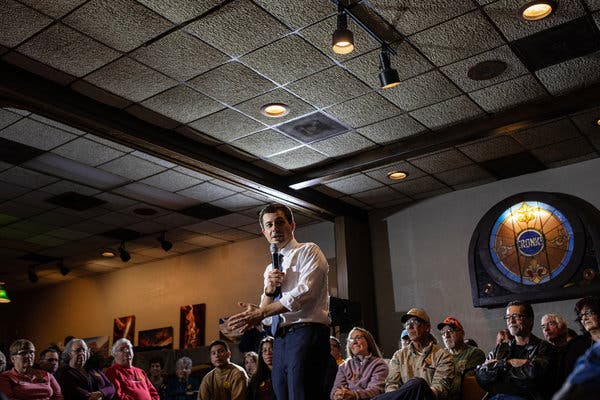 "Another conservative Democrat, like Blumenthal (was elected NYC Mayor as a Republican) is completely unacceptable to Black America and as a result cannot have the Democratic nomination for President.

WASHINGTON — Mayor Pete Buttigieg of South Bend, Ind., whose lack of support among black voters poses an ongoing threat to his presidential candidacy, responded Tuesday to an outcry over eight-year-old comments he made about black students from poor neighborhoods struggling in school because they did not have proper role models.

“Kids need to see evidence that education is going to work for them,” Mr. Buttigieg said during a mayoral candidate forum in 2011, before being elected, a clip of which has circulated widely on Twitter. “There are a lot of kids, especially, the lower-income minority neighborhoods, who literally just haven’t seen it work. There isn’t somebody they know personally who testifies to the value of education.”

After Michael Harriot, a writer for The Root, denounced Mr. Buttigieg’s claim in a scathing essay, Mr. Buttigieg phoned Mr. Harriot on Tuesday to discuss the piece.

“What I said in that comment before I became mayor does not reflect the totality of my understanding then, and certainly now about the obstacles that students of color face in our system today,” Mr. Buttigieg told reporters, speaking in Denison, Iowa. “I want to make sure I communicated that I’m very conscious of the advantages and privileges that I have had, not through any great wealth but certainly through education, through the advantages that come with being white and being male, and that’s part of why I know I’ve got to make myself useful as a candidate and as president.”

In his essay, published Monday evening, Mr. Harriot recalled his own childhood, in which he and other children from the black part of his town had to leap over a ditch to get to school. He argued that Mr. Buttigieg was choosing to ignore the systemic racism that holds children of color back.

“Occasionally someone would invariably fall in the ditch,” he wrote. “It wasn’t because they didn’t see someone cross successfully, it was because the banks of that ditch was slippery and muddy when it rained.”

Mr. Harriot said in a phone interview that during their conversation, he conveyed to Mr. Buttigieg that he was offended the presidential candidate had not demonstrated an understanding that the educational system is stacked against poor students of color. He said he and Mr. Buttigieg had found common ground by the end of their nearly 20-minute chat, a point he reiterated in a follow-up post later on Tuesday.

“I think to call me was brave and it symbolizes that he is willing to engage with people and voters on this issue,” Mr. Harriot said. “I didn’t think that Pete Buttigieg was going to dismiss or ignore black voters. But I think that in an effort to remain moderate, some candidates don’t want to be as confrontational about these necessary issues, because it does ostracize some voters.”

Mr. Buttigieg lags far behind his leading presidential rivals in support and endorsements from black Democrats. A national Quinnipiac University poll released Tuesday found Mr. Buttigieg had the support of 4 percent of black voters — a figure that represented an increase from his standing in prior surveys, many of which showed him with 0 percent black support.

Mr. Harriot said he may continue their conversation at a later date.

He said that while he wrote his initial piece in reaction to Mr. Buttigieg’s comments, all of the presidential candidates should be more considerate of the views of black voters.

“The point of the article was not to drag Pete Buttigieg but to explain this to all the candidates,” Mr. Harriot said. “The ignoring and whitewashing of the issues, and trying to remain appealing to moderate voters, does a disservice to the Democratic Party’s core constituency.”

Pete Buttigieg Responds to Uproar Over Past Comments on Minority Students - The New York Times
Posted by John H Armwood II at 8:58 PM