Opinion | Venezuela’s Kids Are Dying. Are We Responsible? - The New York Times 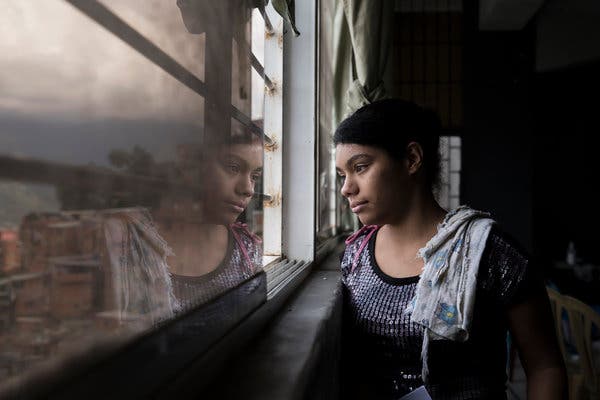 Venezuela’s Kids Are Dying. Are We Responsible?

By Nicholas Kristof
Nov. 23, 2019
CARACAS, Venezuela — This country is a kleptocracy ruled incompetently by thugs who are turning a prosperous oil-exporting nation into a failed state sliding toward starvation.
So a young mom named Daniela Serrano weeps for her baby girl, Daisha — and I can’t help wondering if American economic sanctions also bear some responsibility.
Serrano, 21, lives in the impoverished, violent slum of La Dolorita, where I met her. The baby was fading from malnutrition in May, so she frantically sought medical help — but three hospitals turned the baby away, saying there were no beds available, no doctors and no supplies.
One emergency room finally found someone to examine the 8-month-old girl — on condition that Serrano supply a blank sheet of paper, because the hospital had no paper of its own on which to record notes. It then discharged Daisha, who died at home that night.
“I realized she was cold and wasn’t breathing,” Serrano told me, tears streaming down her cheeks. “I screamed.” A helpful neighbor called 911, but 11 hours passed before “first responders” showed up. They took Daisha’s corpse away.
The hard question for Americans: Do our sanctions, intended to undermine the regime, actually make it more likely that babies like Daisha die?
President Nicolás Maduro’s brutal socialist government is primarily responsible for the suffering, and there are steps Maduro could take to save children’s lives, if he wanted to. But there is evidence that sanctions imposed by President Barack Obama and President Trump are adding to the economy’s deterioration and the torment of ordinary Venezuelans.
“The Venezuelan economy was a drunk floundering in a choppy ocean, struggling to stay afloat, begging for a life buoy,” Francisco Toro, a Venezuelan journalist, told me. “The Trump administration threw it a hammer instead. A hammer is no help at all. It’s heavy. It might make the drunk sink a bit faster. But you can’t put the hammer at the center of a narrative about why the drunk is drowning.”
Venezuela may now be sliding toward collapse and mass starvation, while fragmenting into local control by various armed groups. Outbreaks of malaria, diphtheria and measles are spreading, and infant mortality appears to have doubled since 2008.
Maduro’s response is unconscionable. He buys the loyalty of military officials with money or resources that could go for medicine, he refuses to accept some foreign aid and he bars entry by important international humanitarian organizations.
The best thing for the Venezuelan people would be a new government. But sanctions have failed to drive Maduro from power, inflicting anguish instead on vulnerable Venezuelans.
Even in the capital, Caracas, the best-off part of the country, the suffering is incalculable. Elsys Silgado, 21, has two small children. Last month, they were both near death: Alaska, 5, from severe malnutrition (she weighed 26 pounds) and Jeiko, 3, from a severe infection and a persistent fever of 104 degrees.
Silgado and her children were turned away from four hospitals because there were no beds available. I wasn’t allowed to visit public hospitals, which are tightly controlled by armed gangs hostile to journalistic inquiry (doctors explored trying to smuggle me in, but it would be very dangerous for them as well). I understand why the authorities don’t want journalists visiting hospitals: Silgado described filthy emergency rooms with no electricity or running water.
“It was raining,” she recalled, “and all I could see was mud everywhere.”
Alaska and Jeiko eventually recovered, but Silgado continues to worry that she may lose Alaska to malnutrition. “I’m afraid she will die,” Silgado told me. “Because I now know that I can’t take her to a hospital. They have nothing.”
Many people in the slums told me they had initially supported Hugo Chávez, who founded this regime, but almost all had turned against Maduro.
“When Chávez died, I cried,” one woman in the San Isidro shantytown told me. “But I would poison Maduro myself.”
I sat down with Juan Guaidó, the opposition leader. Guaidó, whose effort to topple Maduro has unfortunately lost momentum, expressed confidence that at some point Venezuelans would manage to overthrow the dictatorship.
When pushed, he acknowledged the possibility that the sanctions may make the humanitarian crisis worse. “It’s a dilemma, for Venezuela and for the world,” he said, but he favors sanctions anyway as one more source of leverage to remove Maduro. “We need to use every pressure tool we can get,” he said.
Maybe that’s right. But my mind keeps returning to the slum dwellers I met.
On the advice of my guide, I had removed my watch and wedding band before entering the slums, for fear of robbery. Then a truly hungry family led me up dubious, broken stairs to a rickety, crowded apartment, and one person rushed out to buy drinks and potato chips to offer me as an honored guest. I felt terrible — and humbled.
People like this are already suffering from Maduro’s indifference, and a cataclysm may lie ahead. So let’s seek new ways to pressure the kleptocracy without adding to the suffering of ordinary Venezuelans. Maybe an oil-for-food program could help, along with greater efforts to force Maduro to allow more humanitarian aid. As we careen toward a humanitarian catastrophe in our hemisphere, let’s rethink our strategy.

Opinion | Venezuela’s Kids Are Dying. Are We Responsible? - The New York Times
Posted by John H Armwood II at 8:48 AM